In one word: celebrate. 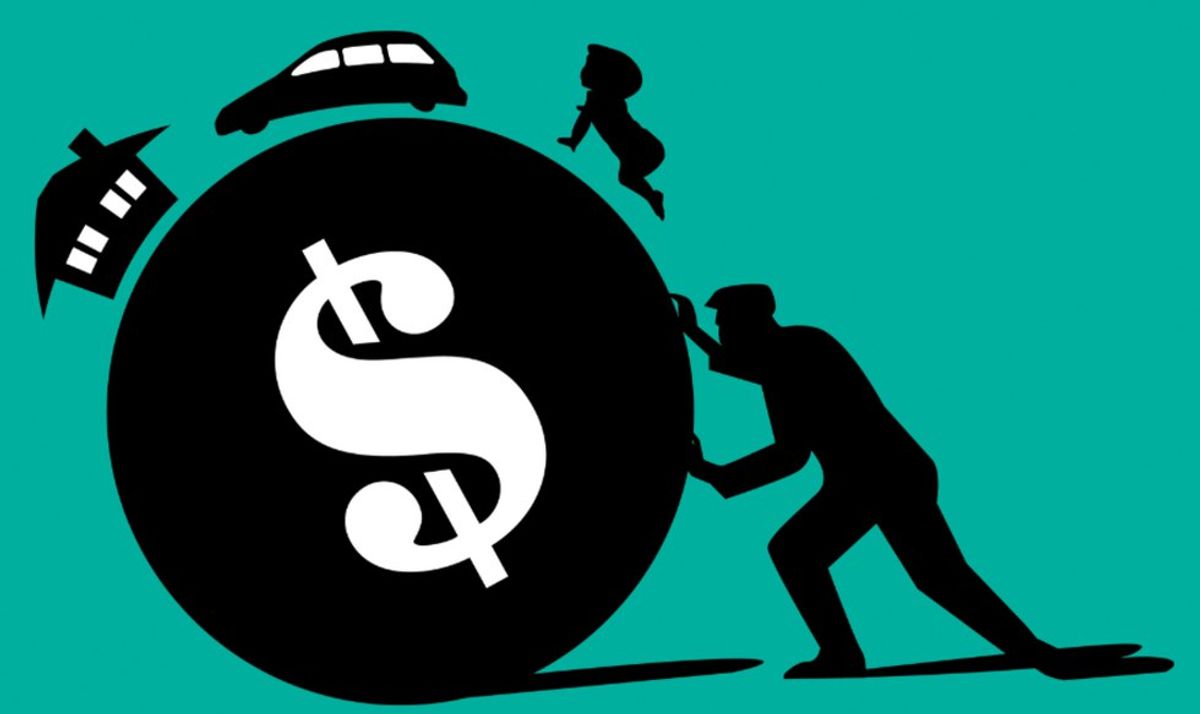 One of the most misunderstood political issues, I would argue, is the national debt. Much of it I believe comes from our implicit idea of what debt means. As an individual, you understand that being in debt is a bad thing- It is not good to owe someone money. Generally, that is true. But let's replace debt with words the mean the same thing in financial speak.

Debt represents opportunity. If you have ever watched Shark Tank, what you are really seeing is people with ideas lining up to go into debt because they think that additional capital is what they need for their business to be successful. With that debt, they can buy a machine to produce more product or hire an employee to help them. The end goal is to eventually make more than what you owe and at a return higher than what you have to pay in interest.

For a whole bunch of macroeconomic reasons, that for simplicity I won't go into, the United States in being the strongest and most reliable country in the world should also incur the most debt. Lets put this in context. If I wanted to put my money in a bank, would I go to a sketchy small bank or would I go to Bank of America? When you put money in the bank, the bank is indebted to pay you back. When another country, say China, buys US bonds, they are giving their money to the US to use in exchange for the US protecting their capital and paying interest similar to like a bank would do. Essentially, the United States has greater use for China’s capital than they do. The US also has the most stable currency to protect capital from inflation which is another reason for investment or greater US debt.

The national debt represents about 108 percent of US GDP- that means the National debt is worth eight percent more than all the goods and services the US produces in a year. Again, that sounds scary, but it is nowhere near the kind of debt may people take on to say, own a house. For example, the average U.S. household has outstanding mortgage debt of more than $168,000. The average household income or personal GDP is just below $55,000. That means the typical household’s debt-to-“personal GDP” ratio would be more than 300 percent. 108 percent for the government 300 percent for the average American family.

I could afford to buy anything I wanted. A billion dollars is a drop in the bucket. The only thing I need to worry about is coming up with at least a 1.18 percent return on my $18.96 billion.

I would scoop up a few public companies. I would buy Google, Starbucks, maybe Apple, to provide a few safe investments.

I would create my own venture capital company and hire an entire staff dedicated to finding the smartest people in the world with the best ideas and inventions and give them the capital needed to succeed.

I would invest in real estate and develop infrastructure in developing countries, putting millions of people to work and sparking enormous growth. Returns on investment could be as high as 20 percent+.

As a humanitarian, and after I was confident I could achieve at least a 1.18 percent return I would put people to work and provide a base income to the poor.

I would hire scientists to find cures to diseases and give them away for free.

I would fund environmental programs.

I would fund space programs.

If I could continue to make a return on my investment, I would attempt to give everyone a phone and access to the internet.

That’s a pipe dream and is most likely not feasible because having access to that much money would surely spark an insane amount of inflation. The point I am trying to make is that the US is able to borrow a ton of money at a low interest rate and that is a good thing. The problem is that a government is responsible for taking care of its citizens, and they ways it does that does not always spark growth. Growth in the US is only 1.5 percent, whereas three percent is the standard for healthy growth in a country. That is concerning. Greater debt should spark greater growth. If our growth continues to lag then 1.18 percent interest payments get more and more expensive.

What will make or break us is whether the US can continue to come up with new inventions that create value and increase productivity and lead to growth, because the rest of the world has made an $18.96 billion bet that we can.

Kassie Hsu
Baylor University
3795
Panda Whale
Here are 100 things I'd rather to than study. I know the semester just started, but