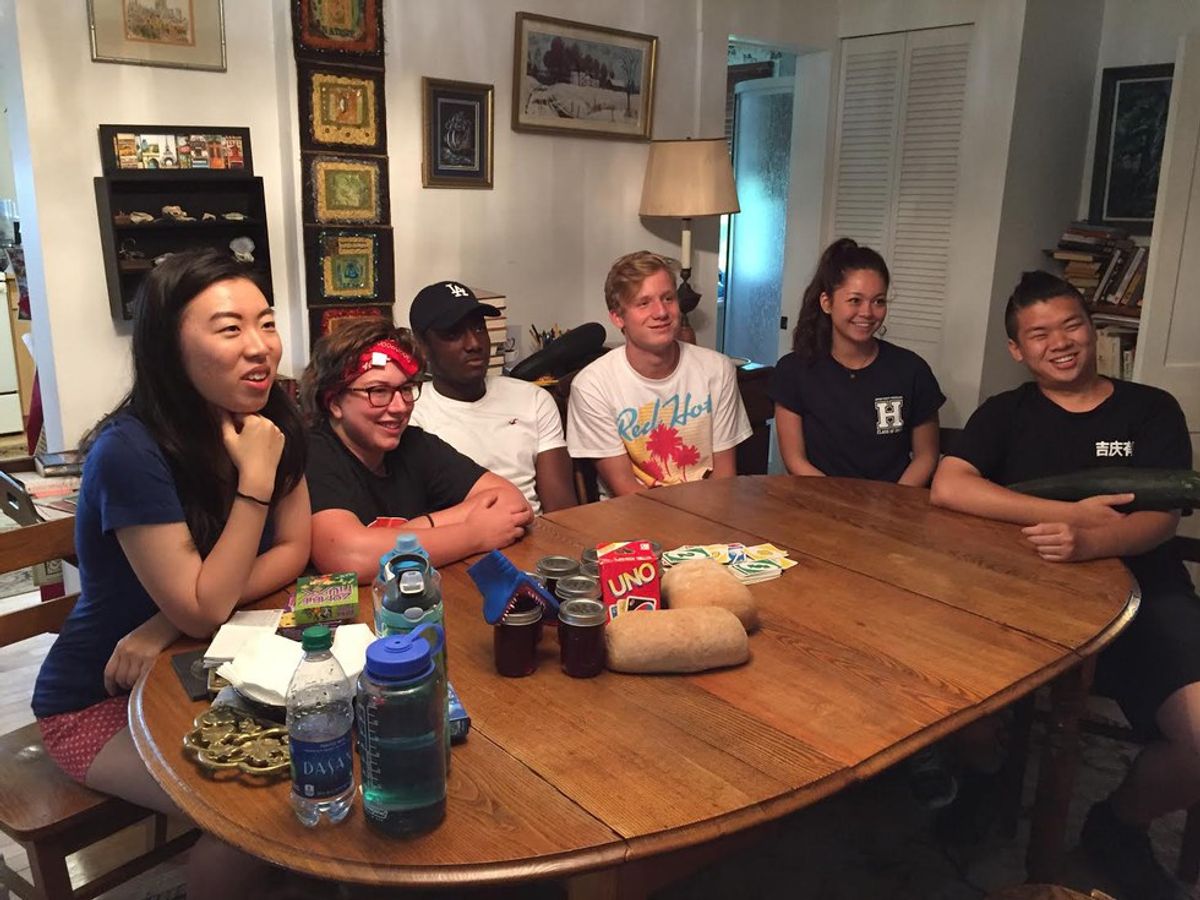 To be completely honest, I never expected much from my college orientation trip before I embarked upon a memorable adventure that inspired me to write about it.

A couple of weeks ago, I clicked on an email from Hamilton's orientation organizer with bated breath. However, I was slightly disappointed at what I saw. Apart from not getting one of my top picks, I was dazzled by the trip's odd name: Nanty-Narking and Belly Timber in the 19th century. From what I could gather from the description, this was destined to be one of the very generic historical trips that leads its participants to obscure local museums, underwhelming reenactments and bland, trivial stories. I really hoped that time could just fly by and that I could return to campus sooner rather than later.

As I ran sluggishly with a group of freshmen across the football field to look for my orientation leaders, I was somewhat averse to say the name of my trip not only because of its awkwardness but also because I had no idea what it meant. So I casually turned my head away from the people that asked and said my trip was called "Nanty-nark-something-I-dunno". Then I leaned against the fence in the shade, sighing as I watched the other orientation groups begin their symphony of joy. Never did I know that the next five days would bring some of the most incredible experiences and most fun of the entire summer.

During the orientation trip, I came to an unusual realization: it wasn't until I was stripped of the convenience of the Internet that I realized that I was essentially alone. I have always felt ambiguous about being born in an era of advanced communication, for I know not whether it is a blessing or curse. After all, without wifi we all feel trapped within our own worlds. As I sat around the campfire accompanied by my newly acquainted friends, I felt a distant memory awakening deep within, like an echo from the bottom of an abyss. Staring into the dancing flames, through a screen of smoke, I could see segments of forgotten past putting on a nostalgic drama before my weary eyes. I saw myself sitting on a serene riverbank illuminated by a ray of gentle moonlight, giggling naively as I dipped my bare foot in the cool stream. I heard my childhood friends banter in their strange dialect (which sounds almost unintelligible to me now) yet they vanished into thin air as I turn my head to talk to them. Suddenly a torrent of panic grasped me, a sensation of suffocating intensity. How long has it been since I saw them last? How long has it been since I had genuine conversation with people instead of a screen and keyboard? Why didn’t I realize earlier that I am losing the ability to make real friends ?

As we chatted into the wee hours of the night, I looked into the starry sky, secretly making a promise to myself. In the years to come, I will treat my friends with sincerity by turning off my phone and ask them out for real, interesting conversations.

Throughout the trip, I felt a bond forming between myself and the land in which I shall spend the next four years. It was a slow, subtle, but surely steady process, like how a seed germinates in the soil of a foreign land. As I travel through central New York learning the past of this beautiful state, I began to immerse myself in the environment. In my dreams, I heard Native American youths sing sonorous songs as they run through the woods; I saw two pistol-wielding gentlemen firing at each other as conviction burns in their eyes; I smelled the fragrance of apples and honey as if harvest season had just begun.

I came to know that Nanty-Narking means have fun while Belly-Timber means tasty food, and indeed I had lots of fun and delicious treats. I gradually learned Hamilton’s rich story as I rode a lovely pony, ate butter served with bread like real Hamilton students did, and learned how Charles.P.Forge was the first student to be expelled from the college for wasting seven dollars “carousing from tavern to tavern”. Afterwards, the experience filled me with a sense of pride as I began to understand the deep root of my college and that I will become a part of Hamilton’s history. I am now able to shout with pride: I am a Nanty-Narker!

The night before my return to campus was a night to remember. I was on a shift of the traditional night vigil, sitting by a small fire as I wrote a letter to myself. Just as I was about to drift into dreamland under the influence of fatigue, an epiphany suddenly came to me. The orientation trip has more meaning to it than simply helping college freshmen socialize, it is there to prepare us for the upcoming academic challenges as well as challenges we will face in the distant future. As we sat by the fire talking about dreams and wishes, we set out to not only become better people, but also to make the world a better place.

Since the end of 2015, the world grew increasingly volatile: the catastrophic earthquake in Italy, social unrest in Turkey, numerous terrorist attacks in France, as well as possible changes accompanied by the presidential election. As I sat by myself looking at the moon, in that moment of peace, I began to ponder what I can do as a mere college student to at least help this angry world calm down a little. I felt insecure for a moment, as the clutches of powerlessness seized me. Then I strengthened my resolve as I threw the last piece of fire log into the flames.

All the world is a stage, and the world needs nothing more than passionate young players to right the wrongs of our predecessors. What an exciting age we found ourselves in! Isn’t this the perfect stage for us to shine? Class of 2020, I have always believed our generation will save the world from the division and hatred, that we can be the generation to wave goodbye to the many problems that still plague this world. I know it because with a strong conviction and four years of hard work at Hamilton, we are going to get there and we are going to make things right!

Finally, a big shout out to our trip leaders Emma Morgan and Genevieve Darling. You are awesome.