My First Weeks Of Being A College Music Student
Odyssey
CurrentlySwoonLifestyleHealth & WellnessStudent LifeContent InspirationEntertainmentPolitics and ActivismSportsAdulting
About usAdvertiseTermsPrivacyDMCAContact us
® 2023 ODYSSEY
Welcome back
Sign in to comment to your favorite stories, participate in your community and interact with your friends
or
LOG IN WITH FACEBOOK
No account? Create one
Start writing a post
Entertainment

My First Weeks Of Being A College Music Student

A testimony of new experiences with music and college. 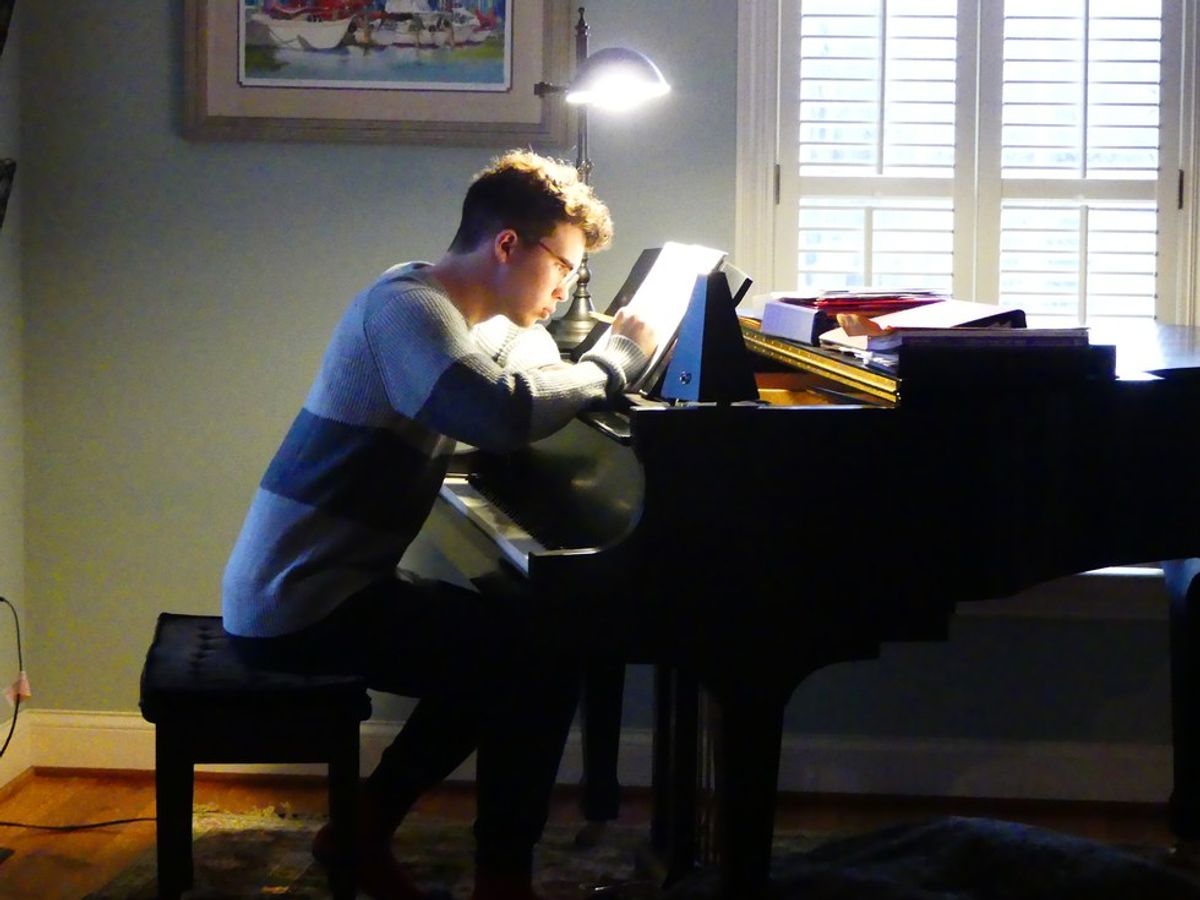 While there was nothing to prepare me for the past three weeks of my life, I have to humbly thank the educators of my high school and even middle school experiences for their complete dedication and inspiring work. The most notable thing I have learned from my former educators and applied into my everyday student life has been one thing in particular:

No matter what field you find yourself intrigued by, regardless of societal norms, treat every single thing you learn in college like it will impact you for the rest of your life.

This past week has been one for the books. In the midst of battles between scheduling and common sanity, I sank down Szymanowski's hole to study his third Symphony for an upcoming concert with my fellow Xavier University Concert Choir and University of Cincinnati's College-Conservatory of Music. Beneath this deceivingly complex facade, the music crept into me unlike I had ever experienced within an actual choir before. Of the many great quotes I've gotten ahold of in this past week, my favorite has got to be;

"Beethoven, Schumann, Handel, Chopin. All of these composers had access to choirs and orchestras at all hours of the day. As a young composer, do you? No? Then make due or challenge societal norms. The work you put into your craft sets you apart"

Present-day composers have noted (and I'm sure ones of the past have as well, I'm just unaware) that there are multiple defining moments in a young musician's career. Some are even transcendent in a way. The moment that you are the most vulnerable, and the moment when the music is the most revealing is the moment you realize what your duty is as a part of this musical community. Singing in a room full of a multitude of people whose sole reason to attend college was also to improve themselves as a musician, was beyond anything I can say to describe it. Emotion is a language we all speak. Music is a dialect we all understand. It may affect us differently, but maintaining awareness of the thought is what is most powerful.

Staying inside of my very own sonic bubble in high school affected me in ways I can not explain without a proper look back at all I tried to take on. Near the end of middle school going into high school (around 14 years old) I had an overwhelming obsession with a group on a popular TV show called "The Sing-Off." Immediately followed the first airing of this production I got in contact with now Grammy Award-winning vocal band, Pentatonix early on, and learned a small amount from them at SoJam and the Kettering A Cappella Festival. High School had just started for me, and I had already placed myself in an unexplainable shield from other types of Western music and Eastern influences. Show Choir dominated my late high school career from running a dozen Twitter accounts, attending 13-15 competitions a year, and eventually going on to win the FAME Aspire Award for "Student Spirit of Service" throughout high school. I had covered a lot of ground, and definitively put myself on the right track to success in that particular genre of whatever it was that was feeding me that internal drive.

Returning to present day, I am not sure of what I am truly in love with most when it comes to music. For years I had thought my time would be best spent spreading the awareness of instincts we all possess but haven't acted upon, and knowledge we all have access to but don't know how to comprehend. Currently, I'm opening my eyes to different sonorities and sonic paintings that I've been too ignorant and/or inexperienced to ever give time for. The world is beautiful and holds more than you or I can ever comprehend.

Nicole Marie Nigro
Individual Creator
4971
c1.staticflickr.com
Where to start...... Let me start with the cliche that life throws us curveballs and what we do with it is what counts.