A Muslim's Perspective On The 2016 Election

A Muslim's Perspective On The 2016 Election

Now with twice the fear than ever before! 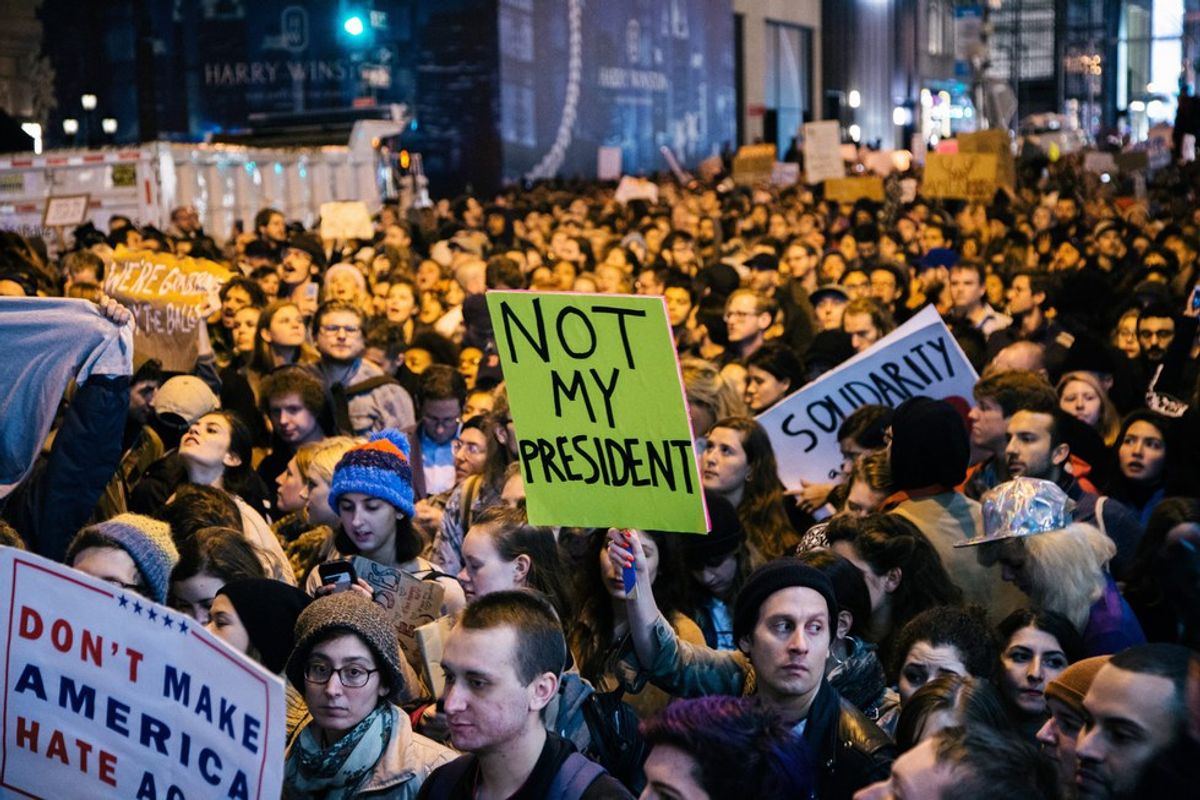 Well, I think we all know how much of a wild ride it's been this past week with everything. I don't really think I need to go into exact detail about what went down, but I think it's still important to talk about it. Everyone has vastly different opinions and views regarding this election. Some face no repercussions based on the results, while others fear for their lives.

Let's recap a little: according to the popular vote, Hillary Clinton won with 60,981,118 votes (including mine) where as Donald Trump won by 60,350,241 votes. This resulted in Hillary winning the popular vote by roughly 630,877 votes. However, because the Democracy system in this country for elections follows an electoral college, Trump won with this system with 290 votes. An influence in him winning also has to do with the small percentage of people voting for the third party candidates in multiple states, causing the electoral college to directed more in his favor. Because of these results, many people nationwide are outraged and demand justice. Others, especially those belonging to the LGBT+ community, women, people of color, and not to mention Muslims have been really fearful for their lives and are worried their rights may or may not be taken away from them. And because of this, just in the past few days across multiple cities, there have been large protests following the #NotMyPresident and #NotMyVicePresident hashtags full of people who want to be heard that this election has proved to be an injustice to all of us.

As a young Muslim woman who's been here in this country her whole life, I've never felt more self-aware about myself and religion until this election.

I'm fortunate enough to live in such a liberal state where I'm surrounded by countless others like me and overall, it's a nice time. We're all able to live peacefully and pursue what we want to do with our lives. There are so many communities within Long Island alone where so many of us are involved, like, for example, the Islamic Center of Long Island that I'm proud to be a part of. In my life, I've never really faced any serious discrimination regarding who I am based on my race and religion. That isn't to say I, or the rest of my family, haven't faced any discrimination at all. Traveling via airplanes and going through airport security is always a fun time (did you detect the sarcasm?) and it's always great getting weird looks because of how I dress (again, sarcasm anyone?).

Ever since the results of these elections, I have never felt more fearful for my life and the lives of others within my own community. I am well aware of the discrimination and hate that many other Muslims in this country face on a daily basis. I've always disliked it and strive for this kind of hatred to stop once and for all, but unfortunately it's pretty clear how much this country hates Muslims. You can't even deny that either considering the huge focus on terrorism and associating Muslims with that.

In this past week alone, I've been seeing countless people and peers especially throughout my college who are in tears because of the results of this election. I'm definitely not the only one who's afraid right now. I personally know a few people myself who have voted for Trump and third party candidates and it's been rather interesting. It makes me angry.

A few in particular have been worried and asked me if I hate them because they voted for the candidates I didn't particularly want. Here's my typical response to this and I still wholeheartedly stand by this: It's hard for me to hate people I know and love, especially if they're people who have been so kind to me and are an important part of my life. However, because of who they decided to vote for, regardless of their position and views, I feel as if they hate who I am.

Let me clarify once again, I feel as if people hate who I am because of their vote and now I'm worried for the well-being of myself and others.

No matter what happens to us, no matter if whatever was originally planned for this country through this campaign actually happens, I'm finding it in me to be more open about myself as much as I can. I don't want to be afraid any longer because of my religion. I want to be able to express myself as I have been already without feeling any fear or uncertainty. I want to help those right now who are struggling and I want there to be mutual understanding.

Expressing one's religion is one of our unalienable rights after all.