How Technology Is Killing Our Live Music Experience
Odyssey

How Technology Is Killing Our Live Music Experience 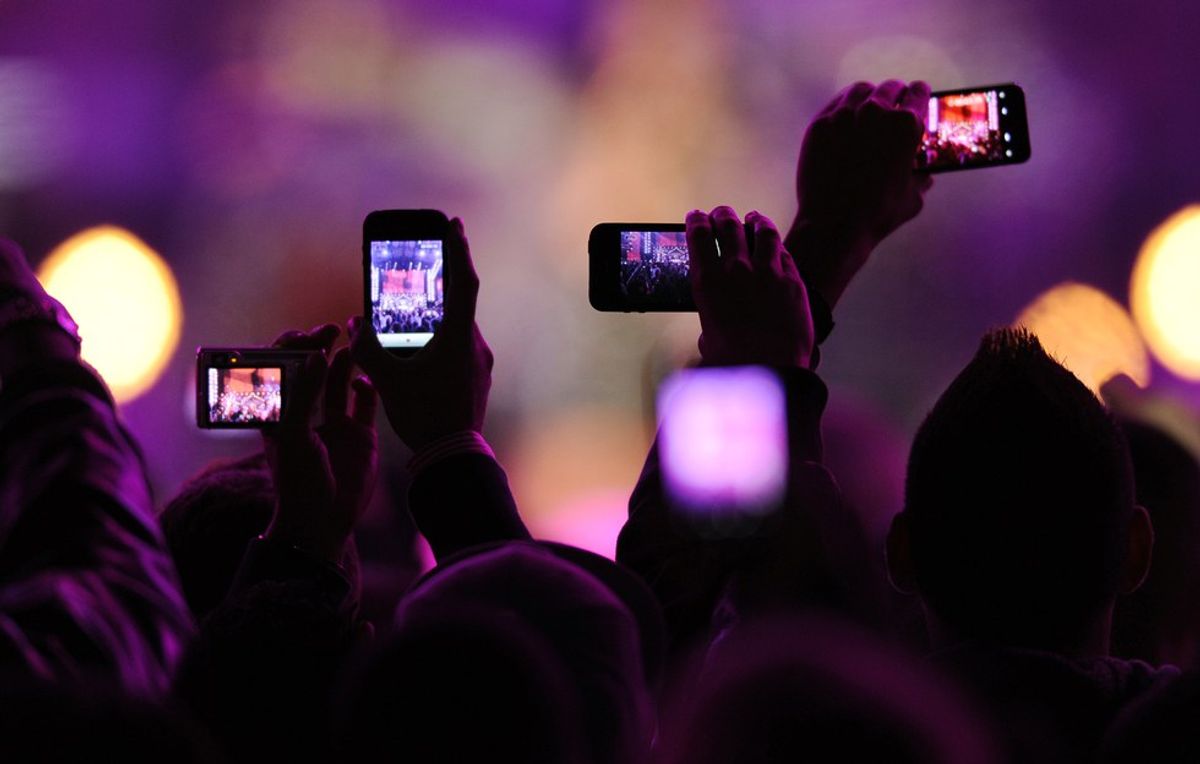 Anticipation is in the air, along with some perspiration and the faint (or strong) smell of weed. You are crammed in an old, small building with a few hundred other people who you know that you have at least one thing in common with. The lights go down and everyone begins to cheer, but suddenly that dark room lights up by the hundreds of cell phones jolted up into the air by ready hands. The same common interest you have with everyone else in the room walks out on stage. Instead of all eyes on the band, there are half-hearted attempts to cheer with the majority of people's eyes raised to the screen of their smartphones, making sure to get just right the right shot.

Technology and social media are becoming a huge controversial topic in our society. How many times do you hear the older generation talk about the "simpler days" when smart phones and Twitter didn't exist? And how many articles do you see shared on Facebook telling us how these same things are ruining us? Between Facebook, Twitter, Instagram, Snapchat, Tumblr, and so many others, it is hard to keep up. Personally, I believe social media is an amazing creation giving us the ability to keep up with other's lives. But, I see it constantly abused, causing people to become obsessive. We see the consequences of this through the inability to have normal face-to-face interactions as well fostering patterns for those who find their identity through how people view them, using social media as their identity's platform.

Now I am not here to tell you to change out your iPhone 6 for a Razor just so you "can experience life to the fullest." However, I am here to tell you one part of your life that you should put that smart phone (also your iPad) away for a few hours.

It might just be me, but concerts are a huge part of my life. I go to multiple concerts a month and probably spend the most of my part-time job's paycheck on being able to see my favorite bands and artists live. What I see constantly when I go to concerts is half of the people looking down on their phones sending a snapchat of a video they just took or looking up at their phones being held up in the air trying to get the perfect angle for the photo they will be posting on Instagram later that night. People are becoming distracted by technology while a band is putting its heart and soul into a performance right before their eyes. These people are missing out on what it's like to be completely enveloped by a performance.

I have made some dumb mistakes in my life, but nothing lives up to the regrets I have when I look back at concerts and remember more of my phone screen rather than the actual performance. (OK, maybe that is a little dramatic.) Over the years I have learned the hard way that the memories and stories you tell about a performance will forever be better than the photos you show when you cannot even remember it. I am not saying that taking a few photos is bad, but when your phone is out the entire time, it ruins the whole point of buying the concert ticket. If you do not actually want to watch the band or artist perform, just listen to the album—it will save you about $40.

A few years ago I saw Boy & Bear, a small Australian folk rock band, at the Troubadour in Los Angeles. I was taking photos the entire concert. While I got some pretty sick shots, my memory of the concert is completely wiped. Not too long ago I saw them again at the Fonda. This time I learned my lesson and put my phone away. WHAT A DIFFERENCE! I remember unannounced guitar riffs, drum solos, and even things that the lead singer said to the crowd. While it was cool to post a rad looking photo on Instagram the first time, it feels so much better in the long run to have a memory I will keep until I am old. I would way rather tell my grandkids how Kings of Leon surprised the crowd by bringing out Chris Martin to passionately play the piano, dueting to "Talihina Sky" the second time I saw them than how I got an insane amount of likes on a photo I posted of them the first time I saw them when they performed "Comeback Story" live for the first time ever.

Concerts are an experience to be completely conscious of and enveloped in. Between the ticket, gas money, parking, and food, a big chunk of change is spent on these nights. Why waste it? Photos are cool, but most bands have a photographer or there is at least one online blog or magazine covering the show, which means that photos of that night can be found.

The experience of a live performance is like no other. Each time a band performs songs live it's different and unique to the crowd; no one else not in the room will ever have the same experience. It is a moment in time remarkably special and exclusive to you. Being caught up in photography and the obsession with "likes" or "favorites" automatically takes away from the experience. The next time that you see one of your favorite bands or artists, put away the phone and immerse yourself in what is happening right in front of you. It truly is a once in a lifetime experience.