We can all make a difference to find a cure to cancer. 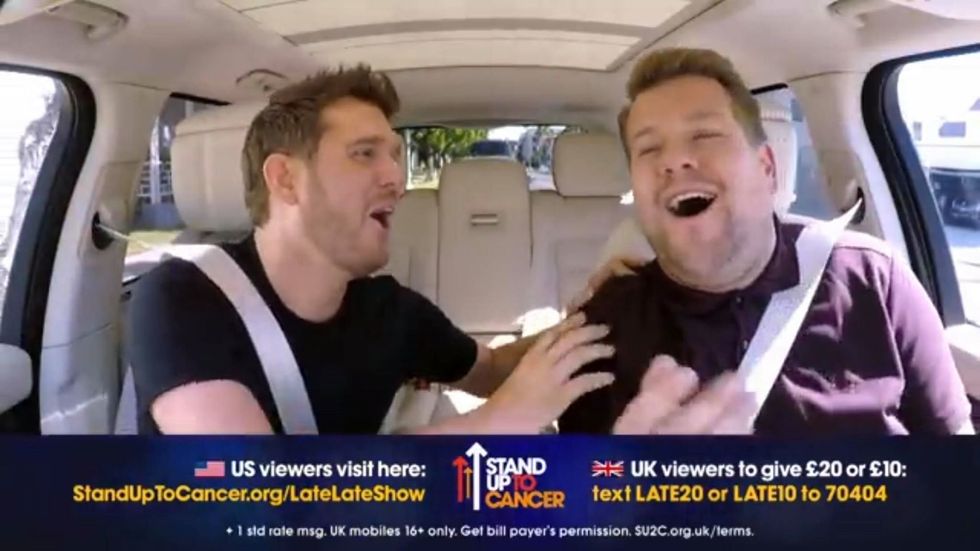 James Corden is known as being the funny late-night television host that can also hit a high note. He has hosted some of the most iconic musicians and stars in his series including in his Carpool Karaoke bit. From One Direction, JLo, Ariana Grande, and Ed Sheeran to his most recent guest Michael Buble. And this bit brought the emotion!

After a couple of his more well-known songs and a skat competition between Michael and James' dad's saxophone and making jokes about Michael's weight and how being thinner makes his penis look bigger (his words not mine!) things got serious at the next stop light.

"We got the diagnoses and that was it man, my whole life ended." -Michael

If you only really listen to Michael's music during Christmas time or at weddings, you like myself, may not know that Michael's family have very recently been to hell and back after hearing the diagnoses of his son Noah's liver cancer. Noah was only three-years-old when they received the diagnoses.

At that very moment, Michael took a step back and completely ghosted social media and his career to focus on his family. His sisters took their kids out of school and left their jobs to be with Michael, his wife, and sweet Noah.

Noah is now 5 years old and cancer free! And Michael is back with a whole new perspective on life and new priorities. He went from giving in to the social pressures of record sales before that Halloween that brought the life-changing news, to now not giving a crap about any of it. He now finds joy in his craft again. He makes a point to live each and every day for love not "likes" and for his family.

No one wants to hear that they or a loved one has cancer or any disease. But like Michael points out in many interviews he has had recently, his family, friends, managers, people who showed love and kindness to them, and people who prayed continuously for sweet Noah and his family, made this journey possible. On days when he didn't know how to continue on, where he felt they were all barely surviving, he gives credit to God, his wife, and the people who supported him through and through to get him through the darkest of times.

Vulnerability can be hard. It can harder when you think that your voice will have no impact, your donation will be too small, or your story will make no impact. But there is power in knowing that YOU CAN make a difference.

There is someone out there in the world who may be going through the same things you are and feeling lost and confused and alone. And your vulnerability and honesty may be what someone needs to hear to get through one more day. To keep fighting for that cure, that holiday, that birthday. Living life day by day.

Share your story, be willing to step outside your comfort zone.

Michael and Corden took the time at the end of the ride to talk about how one donation can make the difference. Check out the link shared to stand up to cancer to check out ONE WAY you can help.