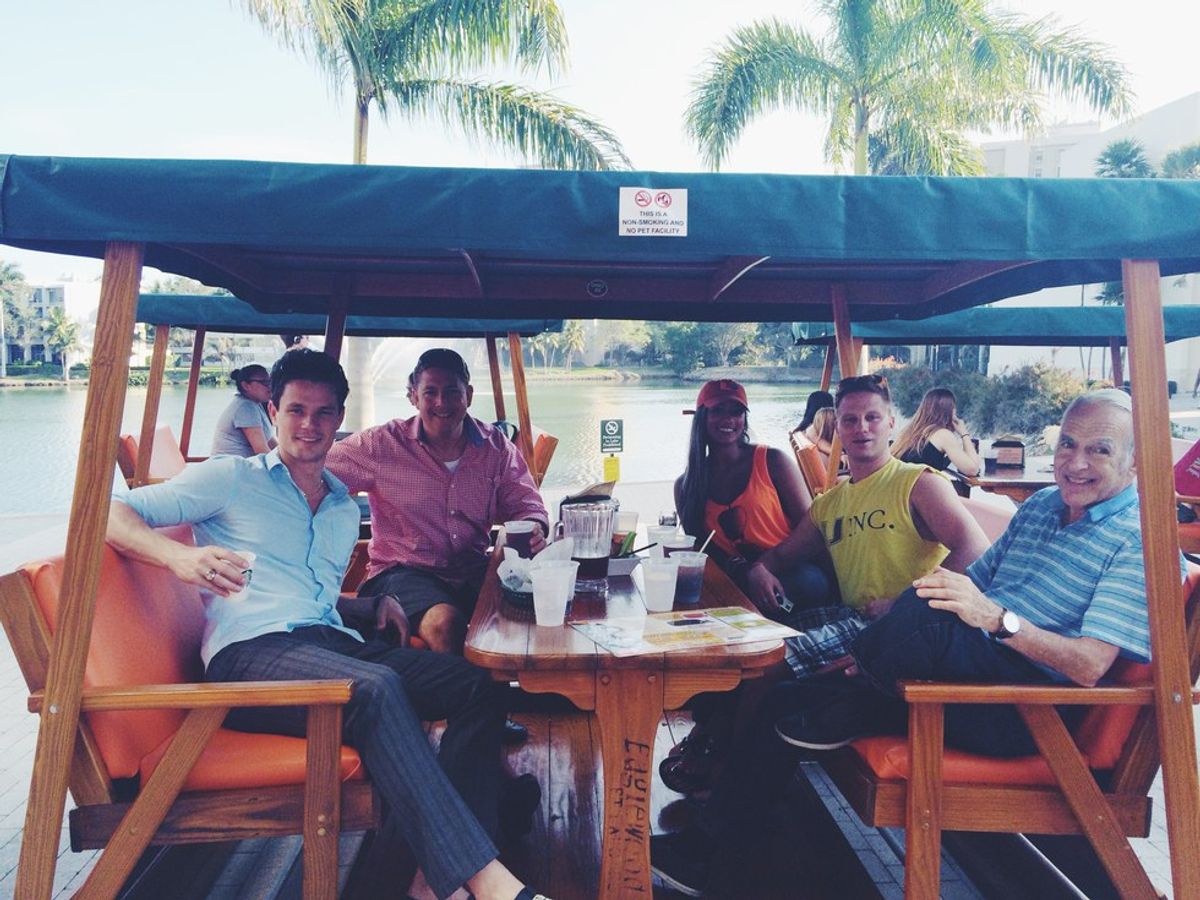 It really sucks when your jean shorts don’t button up or when your crop top is way more of a crop top than it was two months ago (shout out to Brandy Melville shorts and their stretchiness). Gaining the Freshman 15 is nearly inevitable, so at least gain it eating yummy food that you will only halfway regret.

After a long Thursday night in the Grove, nothing is better than spending $6 on a slice of pizza that you barely remember ordering. You might even find your friends, who you lost in Tavern, sitting at a table slumped over their pizza with the man in the kilt next to them.

Although the food is below average and the lettuce is usually still thawing, hitting up LND (late night dining) is the best feeling in the world. Open from 11 p.m. to 2 a.m., they serve an unlimited buffet of chicken wings, french toast sticks, and customized omelets. Warning: LND is very dangerous, you could literally eat the equivalent of five meals in one sitting.

If anyone says they don’t like Chipotle, they’re lying. The line is always out the door, usually taking thirty minutes to get through, and you’ll see at least five people you know, but it is so worth it. Ordering ahead is definitely the move at this poppin' spot. Word on the street is they are going to start delivering!

Have you ever wondered where the pictures of girls holding up sparklers for their birthdays are from? Wonder no more, they are most likely from George's on Sunset. With their amazing drink deals and club-like atmosphere, it is very easy to consume one too many mimosas.

Miami has an on-campus bar. Honestly, how cool are we? It’s way easier to take a seat at a glider and order a pitcher with some fried mac n’ cheese bites than hike all the way to Memorial for an English class.

Pizza is every college student's best friend, and so is delivery. If you're feeling a bit ambitious, you can even walk there, as it's conveniently located at the far end of campus.

It has one of the best happy hours and amazing sushi. It puts all other college food to shame!

The newest late-night food option at the Grove. It is slightly less fancy than Grove Pizza and slightly healthier. You can order a sandwich with as many toppings as your heart desires, and you can even replace the bread with a lettuce wrap, or not.

It is literally right across the street from campus, and their milkshakes, hamburgers, and french fries are to die for. Actually, you might die, because they’re so greasy. Make sure to try the “U” Malt.

Okay, first off, everyone calls it Circle K, that’s because you can legitimately circle ANYTHING you want on your sandwich. It’s open 24 hours and it is honestly magical. The employees usually laugh at you if you come in at an embarrassing hour and order an enormous quantity of food. If your night ever ends up poorly, there is always Circle K!

Now that the tailgates are set up in the frat field of dreams, it is exponentially harder to harass innocent families just trying to grill some hamburgers. Instead of spending way too much money in Sun Life Stadium, grab some chicken wings from one family tailgate and nosh on some pulled pork sandwiches from another spot. Who needs frat tailgate hopping when you've got family tailgates to hit up?

This is arguably the best brunch spot to ever exist. Their Nutella french toast will give you a record number of likes on your Instagram and will probably be the best thing you’ve ever tasted. The wait is usually really long, so get there early.

Do you miss your mom’s matzoh ball soup and your bagels (okay, I’m sure they’re not as good as New York bagels, but it’s as close as you’ll get at UM)? Bagel Emporium is another great brunch spot that will make you feel like you’re at the local Jewish deli back home.

If you’re too lazy to go to the real supermarket to stock up on unhealthy chips, drinks, and candy, then the C-Store is the spot to be. Open until absurdly hours of the night, it is conveniently located by the library, so you’ll always be able to purchase an overpriced study snack.

Don’t even think that I forgot dessert; after all, it’s the most important meal. This ice cream is made in front of you using nitrogen gas, hence the name "ChillN." You can also mix in amazing toppings like Pop-tarts and Reese's. Good thing it’s a far drive away, or else the Freshman 15 would turn into the Freshman 50.

Emmaline B
The Narrative
29807
https://unsplash.com/photos/O0T1SIgHAfM