Meteorologist Told To Cover Up While On Air

Meteorologist Told To Cover Up While On Air

It's not just an issue about a sweater. 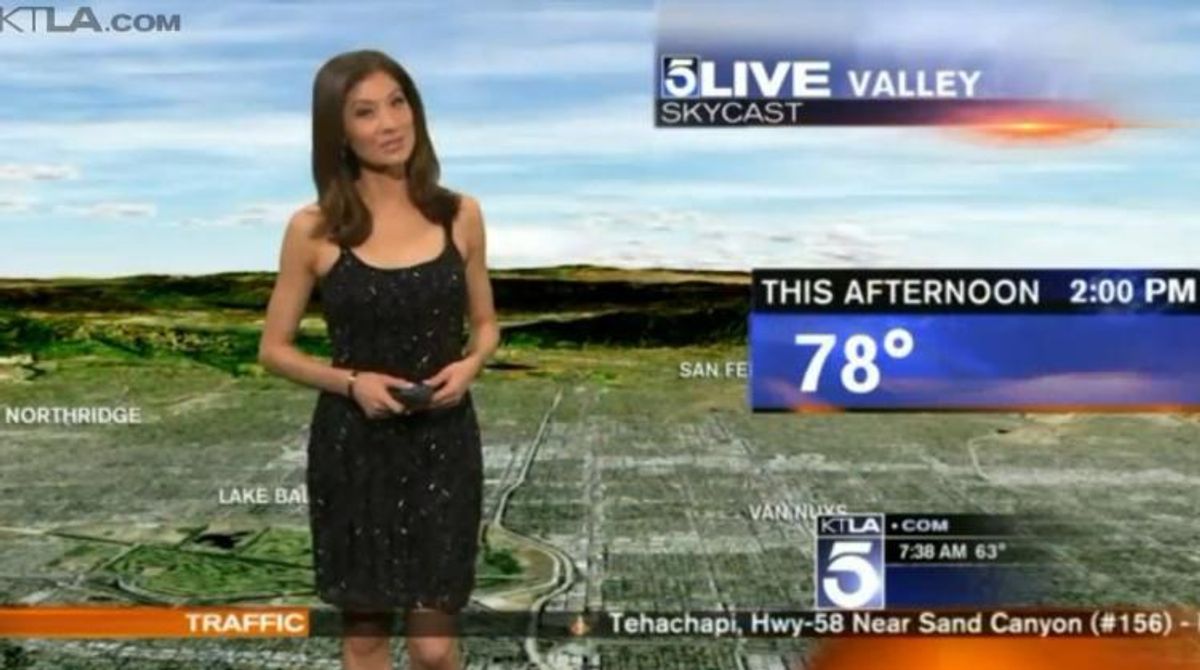 Liberté Chan, a Los Angeles meteorologist for KTLA, went viral after being told to cover up mid-broadcast a few weekends ago. The 35-year-old woman was caught off guard when a male co-worker handed her a cardigan to cover up her beaded, sleeveless black dress she wore on air that Saturday. When handed the cardigan, she asked if it was “because it’s cold” and the co-worker replied with “We’re getting a lot of emails.”

Chan obliged and put the cardigan on over her dress, which she has said was a backup outfit choice after her first choice had an issue with the station’s green screen. She also admitted that the dress may have been "a little flashy for a morning show” but didn’t think it would receive such harsh backlash.

This incident has received a wide variety of responses: some in support of Chan saying that this incident is evidence of a still-present equality issue, some body-shaming her saying her "arms are fat,” some accusing her of wearing inappropriate work attire and some accusing her co-workers of mishandling the situation by addressing it on air.

Chan wrote a response to the incident on her blog which said:

“For the record, there is no controversy at KTLA. My bosses did not order me to put on the cardigan, it was a spontaneous moment. I truly love my job, I like my bosses and enjoy working with my coworkers. Since talking to my team, I want our viewers to know it was never our intention to offend anyone. We are friends on and off the air and if you watch our newscast, you know that.”

Regarding the negative feedback she has received, Chan said she won’t change how she dresses for work going forward. “I’ll just be me and being me has not caused me any issues until Saturday morning,” she said. “It is what it is. I’m not crying over it.”

Some people say that this incident is taking a step backwards in regards to equality; it’s 2016 and women are still being told what they should and shouldn’t wear and what’s appropriate or inappropriate about their bodies. I do agree that there are more appropriate times to wear a sparkly cocktail dress, but for such a dress to generate such negative backlash is genuinely surprising in the year of 2016.

Why do people continue to shame other people’s bodies for the way they look? Why can’t we spread love instead of negativity? Why is the female body deemed so inappropriate? Why is it so shameful and inappropriate to wear a cocktail dress on television when worse is done on television all of the time?

It’s disheartening to see such incidents like these reoccurring. It’s just another instance of a woman being told what she can and can’t do with her body. Fortunately and unfortunately with modern media, it allows everyone to have a public opinion on the actions of others. I only hope that good can come from this on-air incident of Liberté Chan. She has taken the backlash with grace and respect, while some would be utterly embarrassed after such an incident.