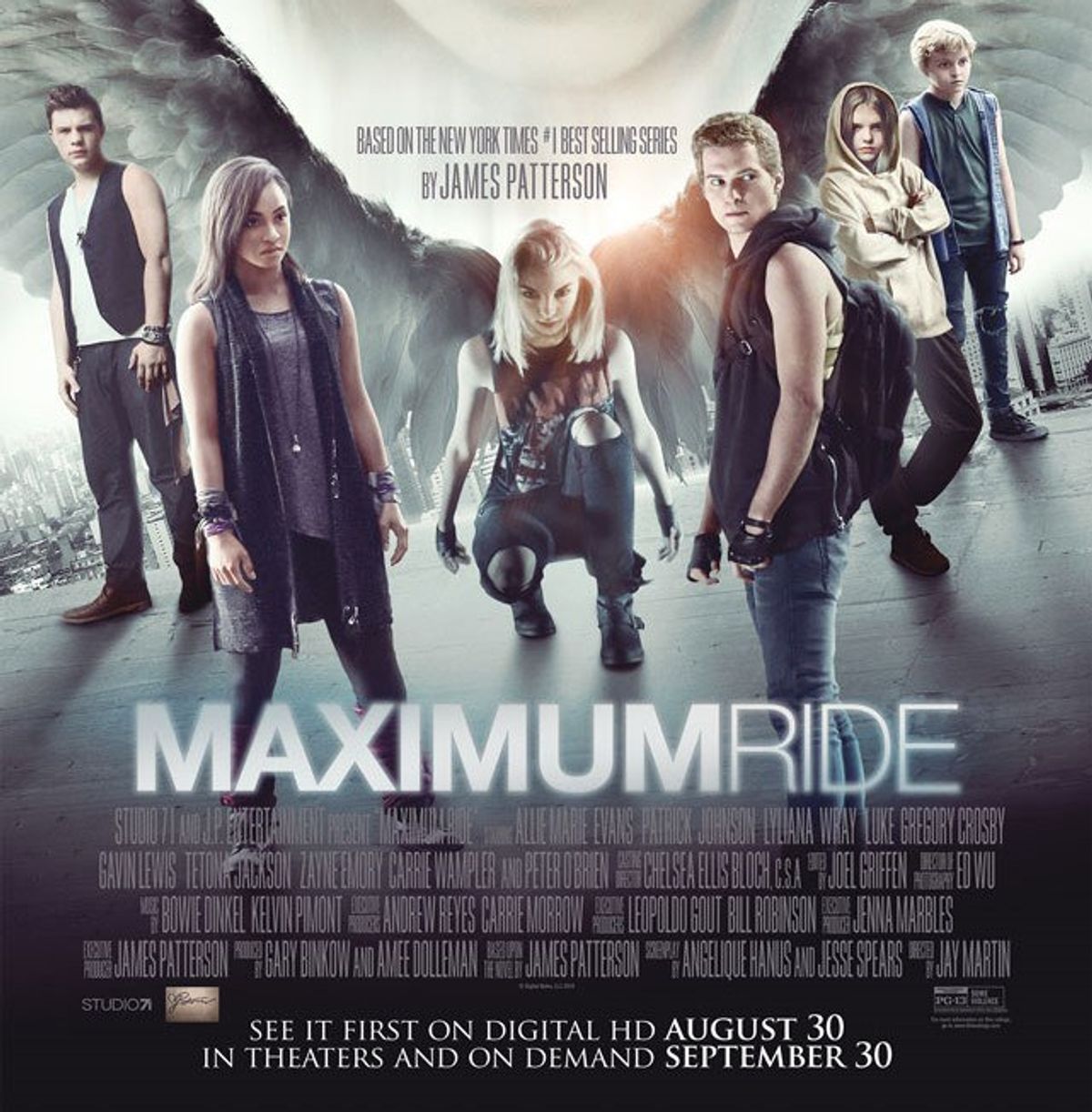 Recently, one of my favorite book series, "Maximum Ride," became a movie. Ever since I read the books, I have been waiting for a movie. Now that we finally got one, I have to admit it was awesome but it was also rather disappointing, considering that the fandom was waiting so long for it. Here are 11 points based on my observations of the film.

Iggy was not portrayed how I expected. I imagined Iggy to be a tall, lanky strawberry red-haired blind teenager who has an awesome sense of humor and is an expert on making things explode. However, in the movie, Zayne Emory, the actor who plays Iggy, wasn’t as thin or pale as I imagined him to be and his hair was more brown than strawberry-red. He also seemed to be a lot more serious in the film than in the books which showed how laid-back and humorous he was. And, of course, considering the situation with Jeb gone, you would expect them to be serious, but if Fang-- Fang-- the most indifferent character in the series is able to joke around, shouldn’t the prankster be able to as well?


And that leads me to my second point.

Patrick Johnson was the complete incorrect depiction of Fang. Fang is supposed to have long black hair, olive skin, and dark eyes. He also was supposed to be very indifferent and silent. Yet, in the movie, Fang was the complete opposite of how he was originally in appearance and personality. In the movie, he’s blond, blue-eyed, and definitely not olive-skinned. He was very sarcastic and talked a lot in the movie, which was a contrast to his usual silence. The sad thing is Patrick Johnson could’ve portrayed Dylan so perfectly, in personality and appearance. Being a Mylan (Max and Dylan) supporter—please, no hate—I guess this was a good thing since all I had to do was imagine Fang was Dylan and I was happy.

Tetona Jackson was almost spot-on in representing Nudge! Nudge is portrayed as having brown hair and eyes, and as pointed out by Max multiple times, having supermodel looks. Jackson looked almost exactly like what I’d imagine Nudge to look like and the hat was a great touch to her look. Although she looked and acted a little older than I expected it was fine. However, the area of concern is her personality. Nudge seemed kind of like a spoiled brat who always wanted her way. I also expected her to be a little more sassy and cheeky but she didn’t seem as bubbly as the books represented. Otherwise, Jackson was a pretty good choice for Nudge.

Gavin Lewis was absolutely PERFECT for Gazzy. The casting for Gazzy was my favorite since he was able to illustrate Gazzy flawlessly in appearance and personality. Gazzy is blond and blue-eyed, and very cheerful and protective over his biological sister Angel in the books. Lewis pulled off Gazzy’s image without fault and his character was as lighthearted as I expected. He was also accurately protective over Angel and his love for exploding things was still there, but his closeness with Iggy was disappointingly not there.

Lyliana Wray’s interpretation of Angel was okay, but not exactly what I was hoping for. Appearance-wise she was blonde and blue-eyed, which was perfect, but her character was very inaccurate. Angel was a very innocent, happy child in the books, while in the movies, she was very quiet and reserved, which was definitely not the Angel I remember while reading the books.

6. Iggy’s relationship with Nudge and Gazzy

In the books, Iggy was very close with Gazzy and they usually worked together to create bombs, problems, and pranks. However, due to Iggy’s solemn attitude, Gazzy wasn’t as attached to Iggy and it was mostly only Gazzy who played around with explosives. Iggy was also unusually a lot closer to Nudge than he was to Gazzy. They showed a few moments with Iggy comforting Nudge but Gazzy and Iggy didn’t have enough moments together as they did in the books.

The wings were a big letdown. I always imagined the wings to be big and bird-like, but the movie’s wings weren’t as big as I imagined and they weren’t as feathery as they were portrayed in "Maleficent." Another setback was the fact that the only wings we got to see a lot were Max’s and Fang’s but we didn’t get to see the rest of the characters’ wings as much. Their powers also weren’t acknowledged as much as I would’ve hoped, besides Angel’s mind reading powers.

In the movies, there were a lot of moments that were just there to fill in some time. Like the five-minute long scenery shots and the closeups on their faces or just some useless moments that seemed misplaced and unnecessary.

In the books, the dialogue was hilarious and very meaningful when it needed to be. However, in the movie the dialogue wasn't as carefree as it was originally. The conversations were very strained and a little awkward. Yet, there were a few moments that were amazing and really illustrated the characters’ personalities.

10. The relationship with Max and Fang

In the books, it takes a long time for Max to realize she has feelings for Fang. But in the movies, it’s only a few minutes in when you see that Fang and Max have feelings for each other, which is not true in the books.

Allie Marie Evans was the actor for Maximum Ride. In the books, Max is blonde and blue-eyed, and in the movie, her hair was spot-on, despite being a little more platinum although I think it suited her personality, and her eyes were a bit darker. Evans was amazing at showing how motherly Max was toward the Flock which is something I love about her casting. Max was overall cast really well and could’ve been worse, but I think Allie was a pretty great choice for Max.

So those were my thoughts on "Maximum Ride" the movie. Overall, I’d rate it a 7/10. True, they could’ve done so much more, but the fact that they were able to make the movie this good despite the low budget and the short amount of time is mind-blowing. It could’ve been a lot worse like, *cough* Percy Jackson *cough* but it actually came out pretty good. Honestly, I’m just glad our fandom finally got a movie we’ve been waiting for. Despite the many problems, it was actually pretty awesome and most of the actors were great in character even though appearance needed a lot.

Comment below with your reactions to the movie and feel free to tell me about your expectations and how they worked out.