Why The Maui Disney Costume Was Just A Bad Idea
Odyssey

Why The Maui Disney Costume Was Just A Bad Idea

A persons culture is not another persons costume. 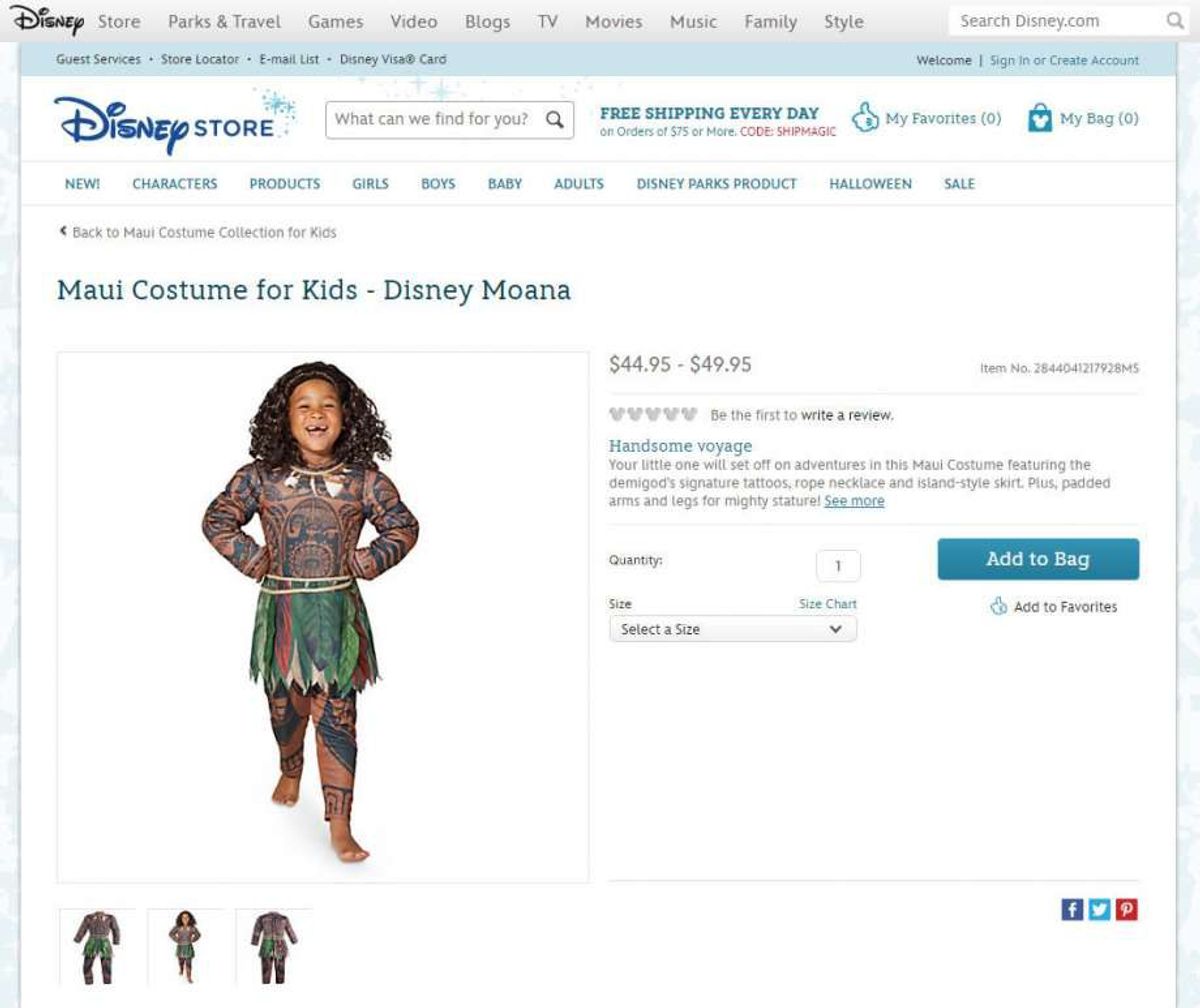 Halloween is a time where children and adults get to live our their fantasies and get to dress as someone else, eat a bunch of candy, and pass out. This past week there has been a significant amount of uproar over something a lot of people would not expect: a children's Halloween costume. No, its not a Native American halloween costume...although it might as well be.

Around this time of year, normally parents of young children often complain of costumes for girls being too sexualized, like the cop and nurse costumes, or that there aren't enough gender neutral costumes, or that there aren't enough Elsa costumes. But this time it is something that isn't exactly unprecedented. Disney released, and has since pulled, the Polynesian themed costume off of its website. The costume would let young children portray Maui, a demigod that Moana befriends in their unreleased movie (set for November 23rd of this year), "Moana". While it seems completely harmless, and being that it's a child that just wants to portray their favorite movie character, it is much more than that. It is about cultural appropriation.

Although many parents have stated it being turned into something "racist" and that it's "just a costume", the truth is, it's not. It's really not. If something, i.e. a costume, is unable to be replicated without giving off any offense, it should not be replicated at all. And in an age of political correctness and people just being plain ignorant and unmindful, we need to remember that a person's culture is not another person's costume and that conversation needs to start at home.

In the movie Moana, a young girl, whom the movie is named after, is in search of an "island of mysterious secrets" when she comes across a demigod named Maui, voiced by none other than Dwayne "The Rock" Johnson.

According to Hawaiian mythology, Maui is a "cultural hero". The creators of Moana were already criticized for the voice casting of Maui, saying that they were perfectly able to tell the "white" story of Hercules with the casting of Dwayne "The Rock" Johnson, who is actually Polynesian, but poorly executed the storyline behind Maui from the animated movie with him as merely a voice. The build of Maui who reportedly was being portrayed as "overweight", was also criticized because it gives off a negative Polynesian stereotype as well as a "typical American stereotype".

So, not only is this costume stereotypical AND appropriated, as well as just really insensitive. There is no way around it. If a little girl dresses up at Elsa, who is white, she doesn't necessarily need to change the skin tone because the character itself bears no cultural reference, unlike this Maui costume, where Polynesians are typically darker. And not only is it about the skin tone. In the description of the costume, Disney called the tribal tattoos "signature tattoos", which basically dismantles the notion of Polynesian culture, saying they're just there and that the culture itself is insignificant which clearly shows Disney doesn't really know much about the ethnic characters they portray in their films. Actually, tribal tattoos are very common among Polynesians, lets just look at Dwayne "The Rock" Johnson for an example.

So parents, before you take your child Halloween shopping, please be mindful of the choices you let them make, because they can hurt somebody. If your little girl wants to dress up like Pocahontas (thats a whole other can of worms but for the love of all that is good please don't) or a generic Native American with the head dress (which is NOT an accessory by the way), please turn them to the attention of the ridiculous abundance of Elsa, Anna & Tinkerbell costumes. Because parents lets be real here... they get the candy anyway, right?