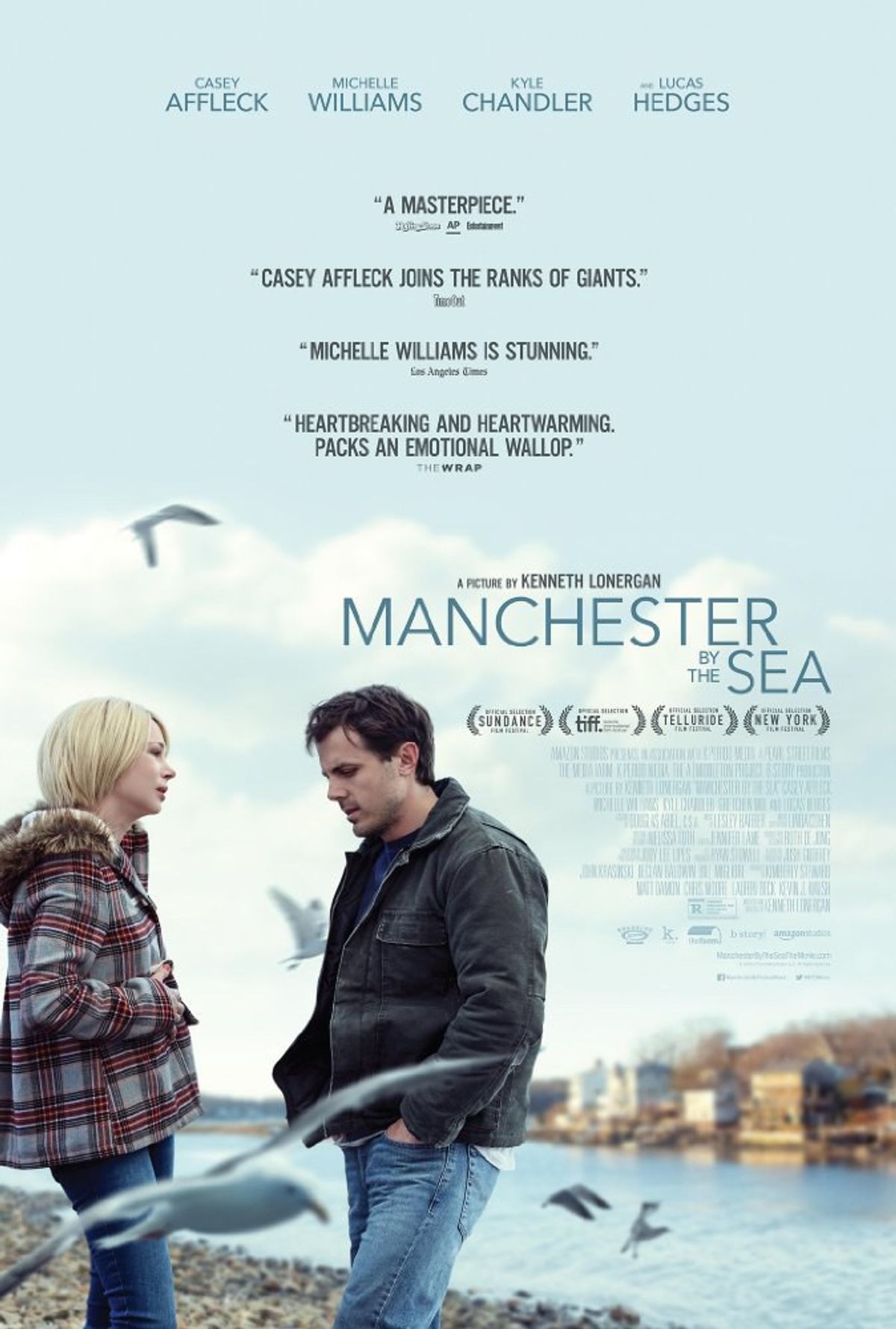 What sad lives these characters live. This makes it all the more amusing to believe that some have described this film as one of the funniest that deal with grief. To a certain extent, I somewhat agree because there are certain moments that give out a chuckle or two. However, this isn’t the sort of black comedy with laugh-out loud moments, but more of an intimate, well-made character portrait of a tortured soul with a dark past.

The film stars Casey Affleck (in a master class performance likely to win the Oscar for Best Actor) as Lee Chandler, a reserved, moody handyman living in Quincy, Massachusetts. One day, Lee gets word that his brother, Joe (Kyle Chandler), has just died of a heart attack. To his surprise, Lee finds out Joe appointed him as guardian to his 16-year-old son, Patrick (a terrific Lucas Hedges). Through flashbacks in between the present, we learn more about Lee and life with his family as he lived in Manchester. Fishing trips with Lee, Joe and Patrick were more frequent as they joked around and had a good time. Lee was married to Randi (Michelle Williams, stunning and heartbreaking), as they resided at Manchester with two baby daughters. Then tragedy hits, a cloak of horrors and tribulations that covers Lee’s beams of happiness (the details of which I do not dare spoil here).

The scene described above is one of two in the film that certainly hit hard emotionally. Director and writer Lonergan expertly constructs these crucial scenes with sure-shot direction and aids them with a quietly devastating screenplay. As I mentioned earlier, this film can be considered a comedy-drama, but I would argue it definitely pertains more to the latter than the former. Lonergan goes right for the jugular on these poignant moments, and he usually hits the mark. My only complaint with the film is Lonergan’s tendency to add too many slow-paced scenes, which he probably intended on including to create moments of silence with a meaning. By this, I mean that they serve for a particular dramatic effect that usually a stinging dialogue interchange or a plot scene with action would accomplish. I believe silence in films should be to create some sort of growing feeling like intensity or desperation. Here, it seems they only serve to show the audience the depression of Lee Chandler and what he normally does on a daily basis when not awkwardly interacting with other people.

Still, the film works due to Lonergan’s wonder of a screenplay and the fantastic performances all around. The entire cast do themselves proud, especially Affleck who portrays a man of sorrow and despair surrounded by others who genuinely care for his well-being. Williams and Hedges are both equally arresting, drawing the viewer into their search for helping Lee.

Manchester By the Sea is the kind of film one would expect during awards season, around the November-January mark. This isn’t the type of exhilarating picture one may expect from recent films such as Rogue One: A Star Wars Story and Hacksaw Ridge. This is a more demanding and deeper experience, and it is truly a rewarding one by the time the film ends. Lonergan’s Manchester By the Sea is a truly original, sometimes-sluggish but overall great work of drama with bruising emotion.