The Love Train vs. The Hate Train
Odyssey

The Love Train vs. The Hate Train

Why Sanders and Trump are so popular, and why there's only one clear choice between them 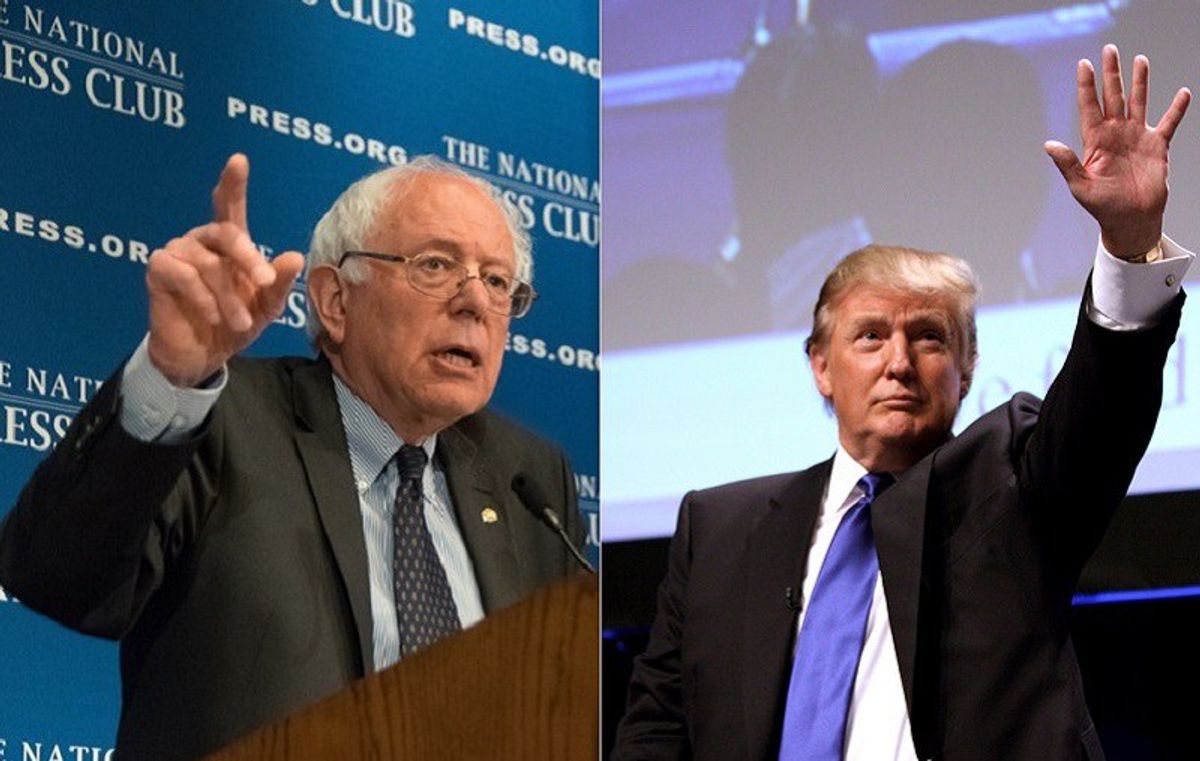 On a recent episode of Real Time with Bill Maher, Dr. Cornel West called Bernie Sanders' campaign "the love train". People of New Hampshire, join hands. Start the love train. Unfortunately, they may have started the hate train, too.

While Bernie won huge in New Hampshire, so did Donald Trump, who is almost the polar opposite of Senator Sanders. At first glance, it's bizarre. How could the people of the same, small state overwhelmingly support two vastly different candidates? One word: authenticity.

You don't need a degree in political science to see that the American public is completely fed up with the government. Congress' approval rating is at eleven percent. The general sentiment is that government doesn't work for the American people anymore.

Ironically, this is where the Sanders and Trump campaigns agree. Both candidates have based their platforms on the notion that the government isn't working for everyday Americans. Bernie blames the billionaires; Trump blames everyone that isn't white (or, in his case, orange). Yet, both candidates have massive, passionate followings, and it's because they're perceived as genuine. During the first Democratic debate, Bernie jumped in an answered a question for Hillary Clinton. "This may not be great politics", he said, "But I think the American people are sick and tired of hearing about your damn emails!" This was terrific politics, actually; Bernie said what a lot of people had on their minds. Rather than taking the easy road and attacking Clinton for the email scandal, Sanders took a path that made him seem more relatable, and his recent surge in the national polls attests to the success of this strategy.

Meanwhile, Trump has been saying the first thing that pops into his racist little brain since the start of his campaign. Of Mexican immigrants, he stated that "They're bringing rapists, they're bringing crime... And some, I assume, are good people". Supporters have stood by him, even when small things such as facts get in the way of his claims. From his claim that he witnessed thousands of Muslims in Jersey City cheering during the 9/11 attacks to his assertion that the majority of Syrian refugees are men with strong ties to terrorism, both of which are untrue, his supporters back him up because "it feels right" and "he tells it like it is".

Is this how we're going to determine candidates from now on? I have no problem with sincerity in politics; I think we all know that there is certainly a lack of it in our current government. But should gut feelings override facts? Should "telling it like it is" be more important than qualifications to be in office?

Again, I have no issue with being authentic. This is not meant to be an endorsement of establishment politics, because that is clearly not the right answer to the issues facing our country. However, I do think that there are other important things to consider when choosing a candidate to represent this nation on the global stage.

I get why authenticity is important, especially in these times. As a nation, we want a leader that's "one of us"; we want someone that truly represents the people. This year's presidential nominees are really lacking in that respect. A son of one former President and the brother of another? A former First Lady and Secretary of State? Whether it's warranted or not, almost all of the candidates are viewed as Washington insiders. The only ones that aren't are Trump and Sanders. Trump is an outsider because, and I cannot emphasize this enough, he has never been in charge of anything outside of the business world. Sanders, while being on Capitol Hill for several decades now, still gets the moniker of "outsider" because he's often been at odds with the rest of Congress, regardless of party. The fact that he was an Independent before running for President as a Democrat further proves that he's not part of the machine, at least to most people.

So both of these guys speak their minds, and that's why both are now favored to win their party's nominations. The general election between these two would be fascinating, since they have very, very different views on almost everything. Even if Bernie skewers Trump in every debate, or Trump relentlessly attacks Bernie on topics unrelated to the issues, neither candidate will lose a substantial amount of supporters. These candidates have earned a loyal, energetic base because they speak and act like an average person.

I've often said this election will be a watershed moment in our country's history. There are three directions it can go after November. If Clinton, Cruz, Bush, or Rubio win, it's a win for the establishment. Politics as usual will continue to reign for a long, long time. If Trump wins, it's a win for fascism. Whenever he's said something that makes coherent sense, which is rare, it is either a sexist, racist, or classist remark. When pressed for details, he often falls back on "Trust me, you're going to love it" without giving any further explanation. He doesn't care about the American people; he cares about himself, and he's using illegal immigrants and refugees as weapons in his claim that America is being destroyed. Donald Trump is the hate train.

But a win for Bernie Sanders is a win for humanity. He's honest, he speaks his mind, but he has facts and evidence to support his claims. His proposals benefit everyone, both currently living in the United States and those who wish to come here, as opposed to Trump's, which only benefit the wealthy and white people. A Sanders presidency can fundamentally change the office of the President of the United States back into what it was intended to be: an agent of change for the good of all of the people. This is our chance as Americans to prove to the rest of the world that we will not stoop to such lows as discriminating based on race or gender anymore. If you really want to "Make America Great Again", there's really only one candidate who can provide that.