All The Reasons To Love Michigan Football

All The Reasons To Love Michigan Football

There are few things better that I've experienced in my young life than watching UM play on a Fall afternoon with the grill fired up outside. 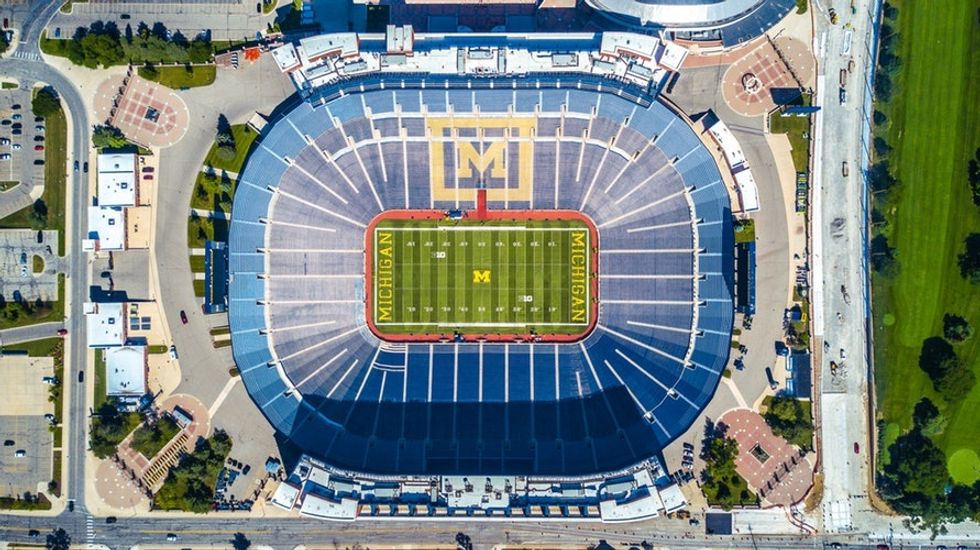 Those who know me on a more personal level know that I love many things, such as a good cup of coffee, playing ultimate frisbee irrespective of the temperature or weather of the day, sitting at a desk with a dense philosophy book in front of me, and more. But it doesn't take long for those who have met me to find out that I am a major fan of the University of Michigan and their sports teams.

My closet is filled with UM shirts and hoodies, my car has a Michigan front plate on it, I have UM coffee mugs, my favorite team on EA Sports NCAA Football games was always Michigan, and I have other UM gear that it would be tedious to mention as there is simply a bunch of it, but you get the idea. This has been an interest of mine for the entirety of my life thus far and it is most definitely not showing signs of changing any time soon. Ever since I can remember, I have cheered for the maize and blue whether they take the field, the court, or the rink.

My father was born outside of Detroit and is a massive fan of Michigan, and so I was raised watching UM football play every weekend. But it is certain that I have owned this passion as my own rather than merely growing up to appreciate UM for some small reasons. Though I enjoy Michigan basketball and hockey, my favorite has always been their football team. Since the college football season is approaching us swiftly, I thought it fitting to write about just a few of the things that are awesome about Michigan football.

First, I love Michigan football because, well, I grew up watching it and also playing football myself. Football is easily my favorite sport for more reasons than I can think of to list and growing up being a part of that as well as watching my team go at it with the best college football had to offer at the time created wonder and excitement in me as a young boy. I used to aspire to play for the Michigan football team myself, but I began to feel called to serve as a pastor early in my college career and fell in love with ministry, books, academia, and scholarly work. I haven't lost every ounce of my athleticism and still am an avid weightlifter, but now I truly feel more at home in a library or office at my desk to read the classics, gain wisdom, and study the Scriptures than I do on the field or in the locker room. Be that as it may, I still love football and am always glued to the TV any time my Wolverines are on the field, granted I have the ability. Every time a touchdown is scored, my father and I are singing Hail to the Victors in celebration.

Second, I love Michigan football because the program is legendary. I don't say that merely because I am a fan either; the program is without a doubt prestigious in the realm of college football, or for that matter, all of American sports. Though Michigan has been rebuilding for the last 2 or 3 years having great success under coach Jim Harbaugh, the Wolverines have the most wins of any college football program at 943 all-time wins, the only Division I team that even comes close behind is the Notre Dame Fighting Irish at 906 wins. The Wolverines also rank highly, though not at the very tippy top, in terms of national titles at 11, the first one being in 1901 and the most recent one being in 1997 under coach Lloyd Carr and Heisman Trophy winner Charles Woodson

In addition to that, Michigan has won 8 Rose Bowls and 4 Citrus Bowls and has had 3 Heisman Trophy Winners. In recent years, Michigan has admittedly struggled to pull off wins against the heavier talent in the NCAA such as Alabama or their arch rival, the Ohio State Buckeyes. It hurts to say it, but it must be admitted. Be that as it may, one who possesses knowledge of college football and knows something about its history cannot reasonably deny the pageantry of the Michigan Wolverines and their program's history in the game.

Third, I love Michigan football because of what sort of energy it adds to the season in which it is active and the festivities and events in it. I am a humongous fan of Autumn. I love the Fall season. It is my favorite of the four, hands-down. The fact that Michigan opens their season just before the beginning of the Fall and the meat and potatoes of their season plays out during the Fall makes the season all the more enjoyable. I love having a hot cup of apple cider on a cool Fall afternoon, but being able to sit down and watch my favorite team play smashmouth defense, get down the field with the running game to score on offense and nail every one of their field goal attempts with a warm cup of cider to sip makes for a simply stellar afternoon. There are few things better that I've experienced in my young life than watching UM play on a Fall afternoon with the grill fired up outside, a warm cup of coffee or cider in front of me, and family and friends gathered around. It is, has been, and will be a splendid tradition for me.

These are but three of many reasons why I am a Michigan man, but they are probably three of the reasons that are closer to the top of the list. Here's to a great season of college football. GO BLUE!

collegiate
Report this Content
This article has not been reviewed by Odyssey HQ and solely reflects the ideas and opinions of the creator.