Life in the Trenches of World War I
Odyssey

Life in the Trenches of World War I 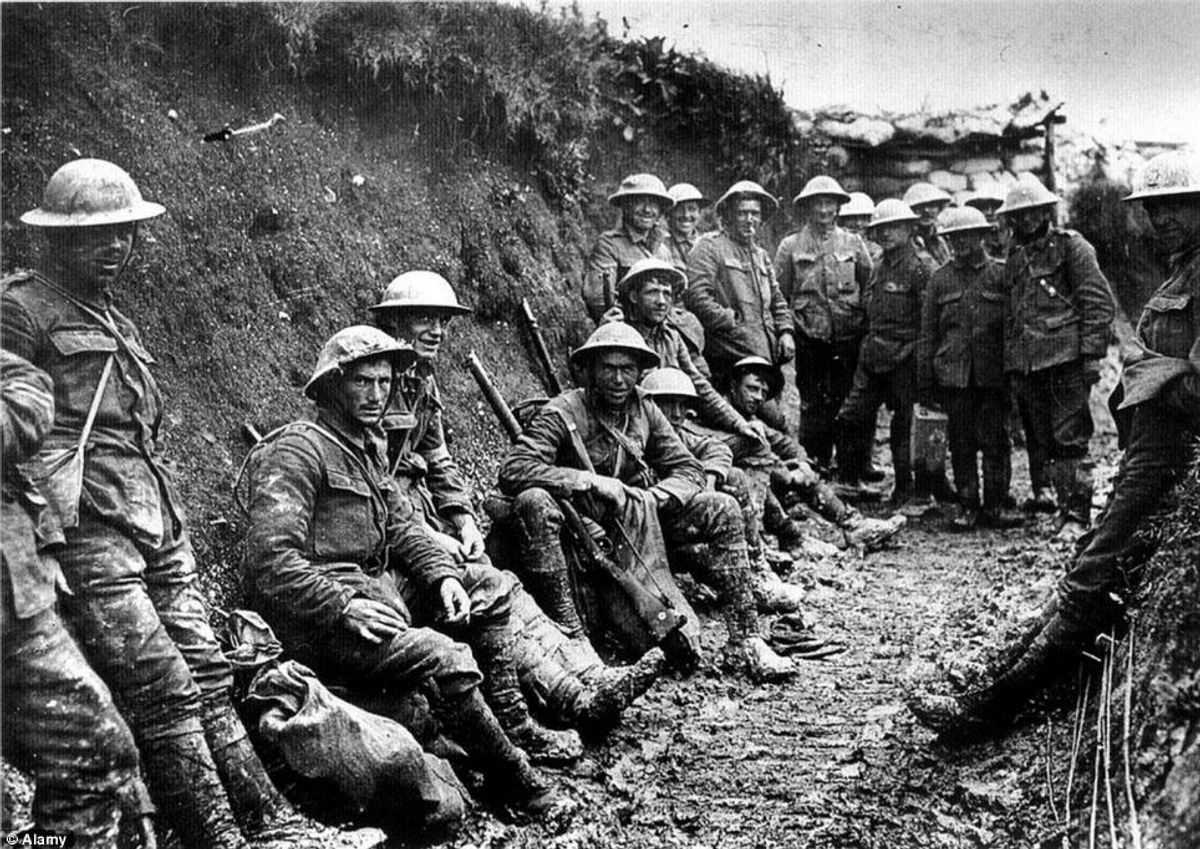 To start off, soldiers in World War I were basically living in a hole in the ground. The size of trenches would vary. Sometimes they were very tight or sometimes they were not deep enough causing many soldiers to crouch a lot. If one was to stick their head above the trench, then they would be met by a sniper’s bullet. Most of the time soldiers would find themselves cramped in the tight living spaces in the trenches. Weather was also an issue for soldiers in the trenches of World War I. During the wintertime, soldiers would often freeze to death in the trenches. Rain would cause the trench to flood. This would cause the ground to always be muddy and have water up to one’s knees. There was never really a quiet day at the front. During one’s time at the front, they would usually hear the sounds of machine gun fire, artillery fire, airplanes, battles cries, yelling from soldiers that were wounded or dying.

When soldiers were not fighting, they had daily tasks they had to do in trenches. Some of these tasks would include digging latrines, pumping out water from the trench, and filling up sandbags. Cleaning weapons was the biggest task soldiers had to do. This was to make sure weapons would function properly. Even a little mud in a rifle could sometimes cost a soldier’s life in battle. Soldiers had to always be prepared to defend themselves if the enemy was going to attack. This meant that they had to be prepared to defend themselves if the enemy was attacking. Gas masks also had to be kept close by for gas attacks. Soldiers also had to go through inspections regularly. These inspections were to see if one had trench foot. Men would stand for hours in flooded trenches without being able to remove their wet socks or boots, and since trenches were flooded most of the time and very unsanitary, soldiers would be infected by trench foot. Those who were infected with trench foot would usually have their feet amputated.

Probably the worst part of living in trenches during World War I was the smell. Trenches were very dirty. To start off, body odder was a very common thing around the trenches. Most soldiers would go days, weeks, or even months without washing themselves. Latrines would also overflow a lot, causing trenches to smell really bad. Soldiers had to deal with the smell of rotten flesh from the dead bodies or body parts that were in their trenches or left behind in no man’s land. This would lead to rats becoming an issue in the trenches. Rats could be found all over trenches. These rats would also cause diseases to spread throughout the trenches. For example, rats would cause lice would spread around a lot in the trenches during World War I.

Night time was a nightmare for soldiers. In those tight living spaces, soldiers would only get a few hours of sleep. Sometimes they wouldn’t be able to sleep at night because of artillery or machine gun fire that was taking place. At night, soldiers had to deal with the constant fear of being hit by artillery or poison gas, which made it hard for many to sleep as well. Shell shock became common among soldiers in the trenches. Shell shock developed as a term to describe the psychological reaction of soldiers in World War I to the distress from battle since soldiers would see their fellow comrades die in the trenches very often and they never knew if they were going to die next. Some symptoms of shell shock were headaches, panic attacks, depression, and anxiety. Even when the war ended, many soldiers returned home with shell shock that took forever to go away or would never go away.

Disease, bad odors, rats, rotten food, shell shock, mud, and death, this is what the average soldier went through during their time in the trenches in World War I. There is absolutely nothing glamorous about the living conditions in these trenches soldiers were in during the war. These trenches were a soldier’s defense from being attacked by the enemy and their muddy home for the war.

Caitlin Marie Grimes
University of South Florida
9330
Beyond The States