Your comments stung, but they taught me to never be ashamed of being a girl. 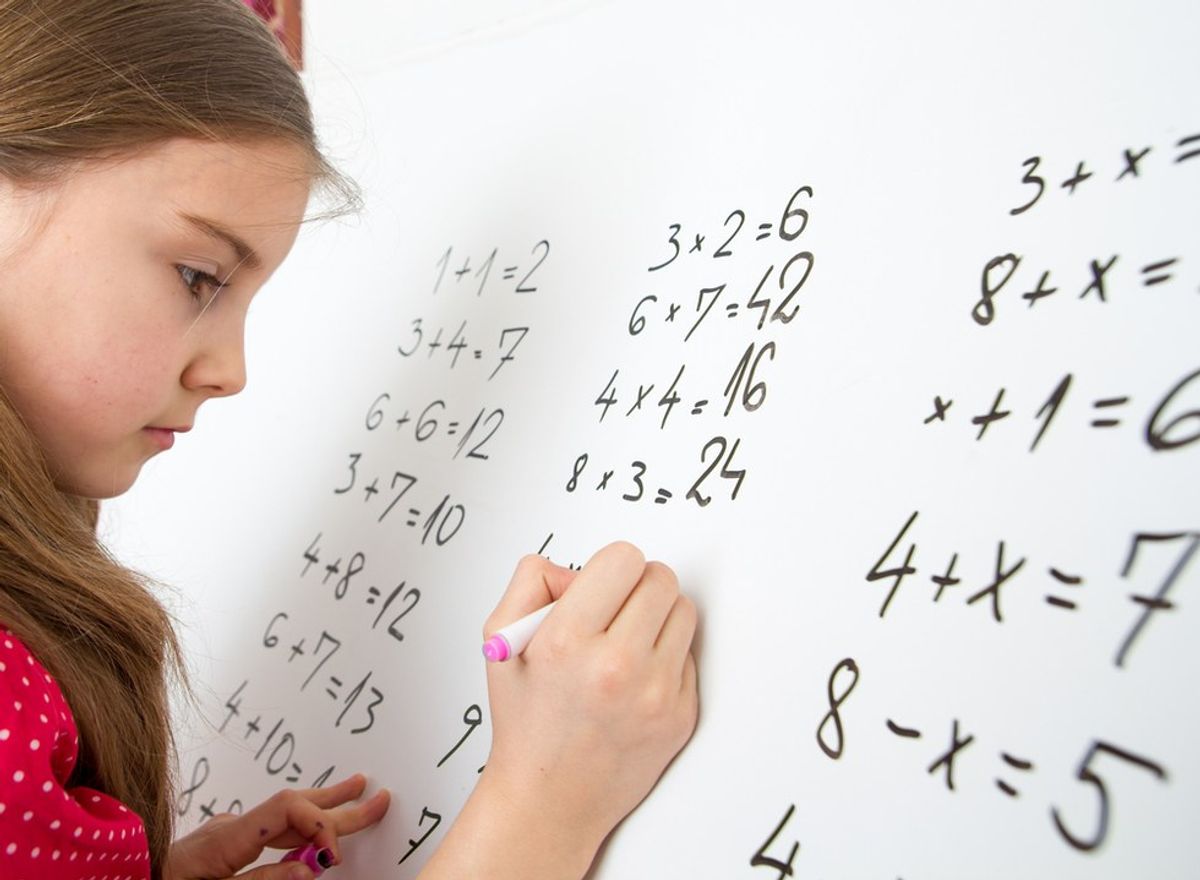 Dear Boy I Sat Next to in First Grade,

Hi. You probably don't remember me, and to be honest, I don't even remember your name. I remember the words you said to and about me though. We were doing an addition and subtraction "Mad Minute" exercise as a class. The person who got through all of the problems correctly first was the winner, and you'd get a sticker across from your name on our class chart. On this particular day, I was the winner. I was very excited, as I got to be the shining student in the class that day. After our teacher checked my work and announced I was the winner, you threw your pencil in anger and loudly proclaimed, "I can't believe I was beaten by a girl!"

I remember being frozen. Not knowing what to do or say. Our teacher didn't do or say much either. She simply told you to go pick up your pencil and to use your "inside voice." I felt embarrassment, remembering hearing snickers from other members of the class. I actually felt badly that you were so upset, and went home that day and cried. I wanted so badly to take it all back, and to make you feel better. I was genuinely more upset that you were upset, rather than being distraught over your words to me.

I don't know where you are today, what you are doing, or what kind of person you are. But I hope sometime over the last fifteen years, that someone taught you just how wrong what you said was. I wish I could go back and have that person be me. I wish I had told you that day that being beaten by a girl was nothing to be ashamed of. I hope you know now that it doesn't matter the gender of the person who does something better than you. And I hope you know now that sexist comments like that get you nowhere.

Only recently did I realize the gravity of this moment. I was writing a paper on gender identities in children when this memory came flooding back to me. Gender identities and their subsequent norms are instilled within us basically from birth. Little girls wear pink and are dainty; little boys wear blue and play in the dirt. While I did my fair share of playing in the dirt as a kid, as did many girls, we were still often reminded that it wasn't our place. In all reality, I don't think many people truly believe that girls shouldn't get to run around and play outside like boys. Yet, those comments still prevail. Just as degradation of women succeeding in athletics, politics, school, and the workplace, still exists. It's hard to change a lifetime of thinking, and gender norms have been around pretty much since the beginning of time, and have only continued to evolve (for better and for worse).

I don't think anyone genuinely thinks that girls can't do something just because they're girls. (well, I'm someone, somewhere does). And I really don't think you do, or even did. Your comments were just a byproduct of the society we live in. Even as a small child, you had an understanding of gender roles, and believed that boys were "supposed to be" better than girls at school. Just as I had an understanding that I was "supposed to" feel that it was my role to be emotional and feel badly for hurting you. If even little kids can grasp this archaic principle, just imagine the ripples it can make as we grow up.

Do you still see sexist comments and actions like yours all those years ago? I certainly do. I hope the next time you said something like that, someone set you straight. I hope that anytime an adult hears a comment like that, especially a teacher, that they say something. I hope that anytime anyone makes a comment like that, whether they are six or sixty, that they are informed of just how wrong they are. Because the more we let things like this slide, the more they continue, and the more things don't change. If you're going to be upset over someone being better than you at something, don't let it be because they are a girl, or a different religion, ethnicity, race, sexual orientation, what-have-you. Let it be simply because of that - that they are better. And learn from it, and from them. Have it inspire you. Don't let it tear you down, and certainly don't tear others down because of it. At the end of the day, we are all people, capable of truly incredibly things.

While I didn't really remember this moment until fifteen years later, it's vividness in my memory is proof that it made a lasting impression. Whether I realized it consciously or not, your words that day lit a fire within me. I might have went home and cried that day, but I also remember telling my parents about what you said. I remember them saying to me that I should never let anyone make me feel badly because of my own successes, and that I should never let anyone let me believe that being a girl made me inferior. And I never have since.

The First of Probably Many Girls Who "Beat You" at Something