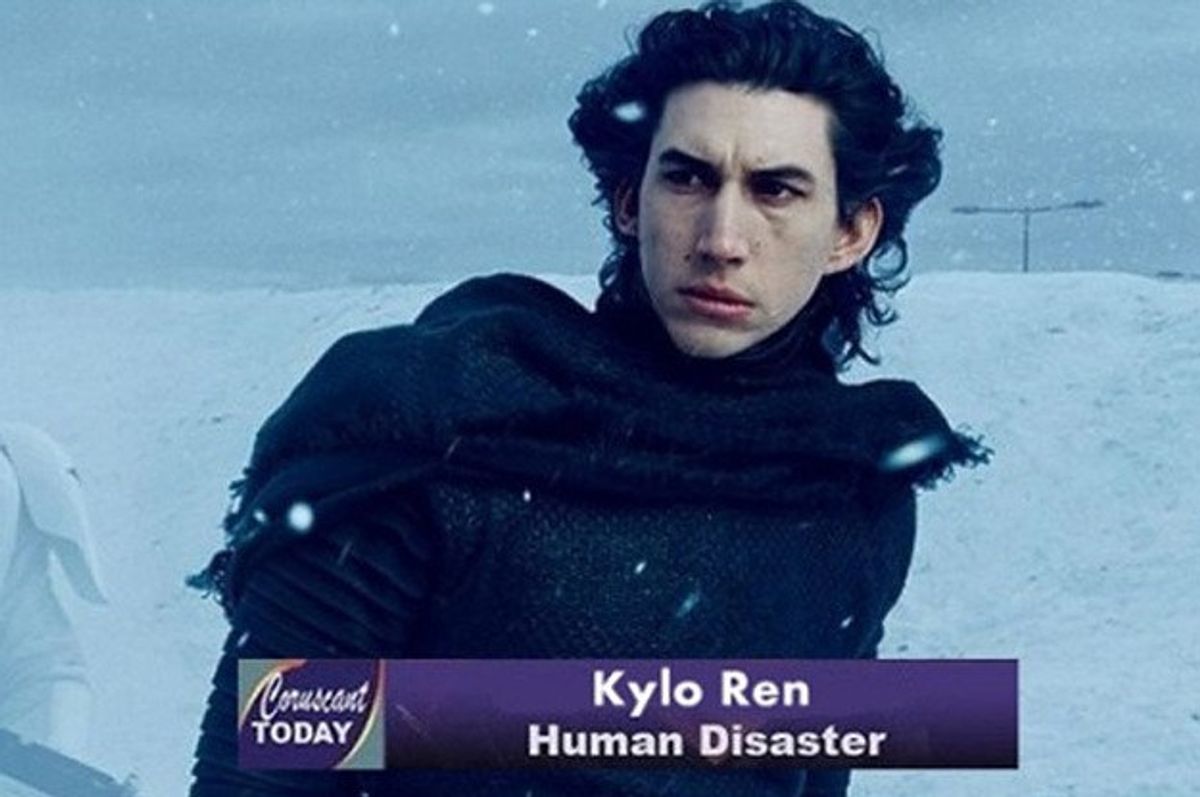 For all you "Star Wars" fans out there, you know that the first six movies gave a plethora of characters to despise. The major villain was of course, the most famous bad guy of all time, Darth Vader. But in Episode VII, we were #blessed with a brand new villain to loathe: Kylo Ren.

After "The Force Awakens" came out, the entire universe decided it was appropriate to dedicate their time to making fun of Kylo Ren, aka, Ben Solo. There have been countless memes created for his despicableness, and deservedly so. Kylo Ren is literally a fanboy for his grandfather and because of that has caused quite a stir in the "Force."

Like, no offense Kylo, since this was, you know, your life's work and all, but your grandfather literally did not ask for this.

Kylo Ren is just that: Dramatic. He's the human embodiment of the word "extra." Not to mention, he killed his father; the living legend that was Han Solo. Han loved his son, despite him being an idiot, and his mother believed there was still light left in him. But Kylo lives for the dramatics and decided to curve his own father... and kill him. Can he really come back from that? (No. No he can't. You can't come back from killing Han Solo. It doesn't work that way.)

(This is the actual reason, you guys. He couldn't take the dad jokes any longer.)

Not to mention that besides stanning his own grandpa, Kylo Ren has a really weird competitive relationship with General Hux to impress Supreme Leader Snoke. General Hux sorta cares, but the dude is ultimately just trying to do his job. But Kylo, our favorite loser, is desperate to one up anybody who challenges him.

This whole string of Kylo's storyline seems to reiterate how insecure he is. How old is Kylo supposed to be? Did he magically skip his pre-teen years and is now living them out in a grown man's body? All this teenage angst should have passed a long time ago, Ben Solo. Get your act together and start living for yourself.

I, for one, am extremely excited for Episode VIII simply for Kylo's storyline. How much more can Kylo Ren, the village idiot, screw up? I feel like murdering your own father to impress your dead grandfather is the pinnacle of disappointment.

Will he come back to the Light for his darling mother? Or will he screw that relationship up too? I need Ben Solo to let me know what Han or Leia did to get him so peeved. All they did was love him. Did they tell him it was just a phase?

L: "Ben, honey, you never even met your grandfa--"

I feel like in his mind, that type of argument would be reason enough to go over to the Dark side and alienate his own family to idolize one family member he's never met. Real cute, Kylo, but nobody asked.

Will he develop some type of relationship with Rey? There are a lot of Reylo shippers out there, but I don't think Kylo deserves any sort of romance, especially one with the beautiful goddess that is Rey. Besides, they may be related, anyway. I seriously doubt that the Star Wars writers would put us through that mess again. But perhaps a friendship with Rey, or even Finn, could change Kylo and bring him back to his Ben Solo persona, even if it's for a scene or two.

Will Luke Skywalker have an important part in his story? I mean, Luke and Darth Vader had a special relationship, to put it lightly. Maybe Ben's uncle could slap some sense into him.

Honestly, I have no idea where this morons storyline could end up. Who are you, Kylo Ren? What are you doing? What is your end goal? I need answers.

(Though my interpretation of Kylo was meant to be more humorous than anything, I seriously recommend checking out this article if you want to understand Kylo Ren/Ben Solo a little better. Kylo Ren has the opportunity to become one of the most memorable characters in cinema considering the circumstances, and I have a feeling Adam Driver will be able to deliver even more than he has already.)

(Another note: any photos I used that do not have credit under them are still NOT my photos.)