I'll never regret rushing, but I can genuinely say now that I'm glad I'm not associated with Greek life anymore. 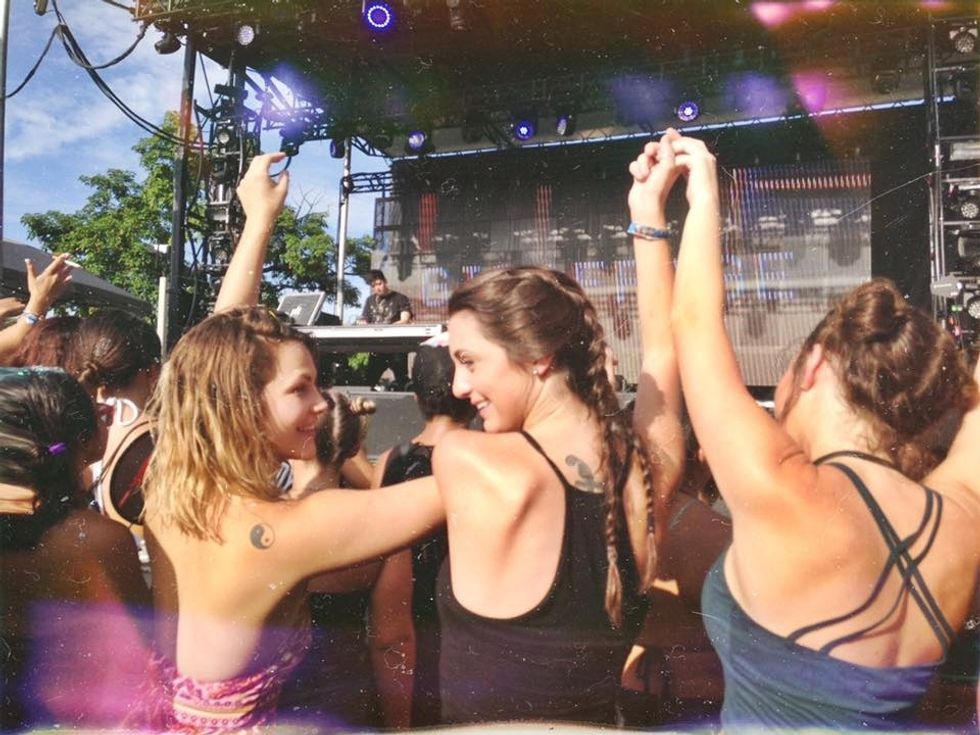 Disclaimer: I know that there are plenty of people out there who have gained a lot from joining a sorority or fraternity, whether it was lifelong friends, important connections, valuable lessons, etc. I know that not all "srat girls" and "frat guys" are the same, and I know that not all organizations have the same values. So before you freak out and attack my opinion, just keep into consideration that I know there are exceptional cases and that everybody has unique experiences from being involved in Greek life.

After my first boyfriend and I broke up at the conclusion of my freshman year of college, I realized that I was so stuck in my comfort bubble that I didn't feel the need to branch out and spread my wings at all. As sophomore year was approaching, I felt like I had already wasted so much time and needed to find a way to quickly put myself out there and meet new people. At the time, I was extremely introverted and at a loss when it came to knowing how to establish a new social circle. I grew up in a town where everybody knew everybody, I was super involved with cheerleading and volleyball, and had the same group of girl friends since I was in elementary school. When I got to college, I was the "new girl" for the first time ever. Even though this is embarrassing to admit, I felt like I didn't know who I was when I didn't have my closest friends surrounding me. I felt like rushing a sorority would force me to face my fears and meet new people. My recruitment experience couldn't have gone better. I felt confident, included, and "wanted" for the first time in a very long time. It was a great change from always feeling shy and alone. I will never regret rushing.

With that being said, I failed to realize that sororities meant a lot of expectations and standards that you were required to live up to. Joining a sorority means agreeing to adopt a certain image. I was no longer just "Lauren Carbone." I was a sorority girl that belonged to an organization and I was chosen to represent their name, and I quickly found out that I'm no good with following rules that I thought were silly and feeling like I was under a microscope. I was also constantly missing mandatory events and meetings because I had to work a lot to pay my bills. I didn't feel like I was as involved as I should've been and I didn't feel like I related to many of the girls either. I remember sitting in a room full of my "sisters" and not saying a word the entire time, because I couldn't stand the fact that every single word that came out of their mouths had something to do with saying bad things about others, mostly about other sisters that just weren't in the room.

I hated gossiping, I hated all of the fakeness around me, I hated feeling like I had to wear certain brands to fit the sorority girl aesthetic, I hated giving a shit about popularity and being "facey", and I hated feeling like if I didn't wear makeup to the gym or straighten my hair perfectly for class that somebody from my sorority was going to see me and tell an "older girl" that I looked ugly. And yes, we were instructed from day one that we had to look pretty in public at all times because we were the face of our sorority now.

So the final straw was when I got in trouble for drinking and driving, and even though I never got convicted, I was kicked out of my sorority immediately based on the news. I was told that no matter what actually happened, it "looked bad on paper" and people were talking about it, and it made the sorority look bad, therefore I was no longer an acceptable sister. I was just a liability. Mind you, I know several fraternity boys who actually got convicted of a DUI and all they got was a slap on the wrist.

Never mind that I was going through one of the worst and depressing situations of my life and could've really used some understanding and support from my "sisters"...but if I couldn't live up to their picture-perfect image, I had to go. I'm a good, smart girl that made a mistake when I was young and stupid. Nobody cared. And better yet, people who were my "fam for life" barely even acknowledge me now when they see me out in public.

After getting kicked out, I thought my life was over. Joining Greek life was my way of making friends and I was on my own again. Little did I know that not too long after the incident, I'd get a new job and meet my best friend and roommate there who also happened to not be in a sorority. She introduced me to pretty much everybody I know. And guess what? My new friends go to music festivals all the time, share my unique style, like the same weird stuff I do, are genuine, down-to-Earth, strive to be different instead of like everybody else, and I rarely ever hear them say a bad word about our friends when they're not around.

I also started writing for Odyssey, so I'm a part of a new UCF community that revolves around my passions and goals. I do the things that are meant for me, and I've learned who I am without being a part of a ginormous clique that I had to pay for. All in all, being turned away from something that I thought I wanted more than anything was actually the best thing that could've happened. Like I said, I'll never regret rushing, but I can genuinely say now that I'm glad I'm not associated with Greek life anymore.

Now that I'm only months away from graduating, I've realized that being in Greek life isn't the most important thing about college. It's about learning who you are, learning what you want to do for the rest of your life, and learning from all the dumb mistakes you make along the way.

From Your Site Articles
Related Articles Around the Web
sorority
Report this Content
This article has not been reviewed by Odyssey HQ and solely reflects the ideas and opinions of the creator.