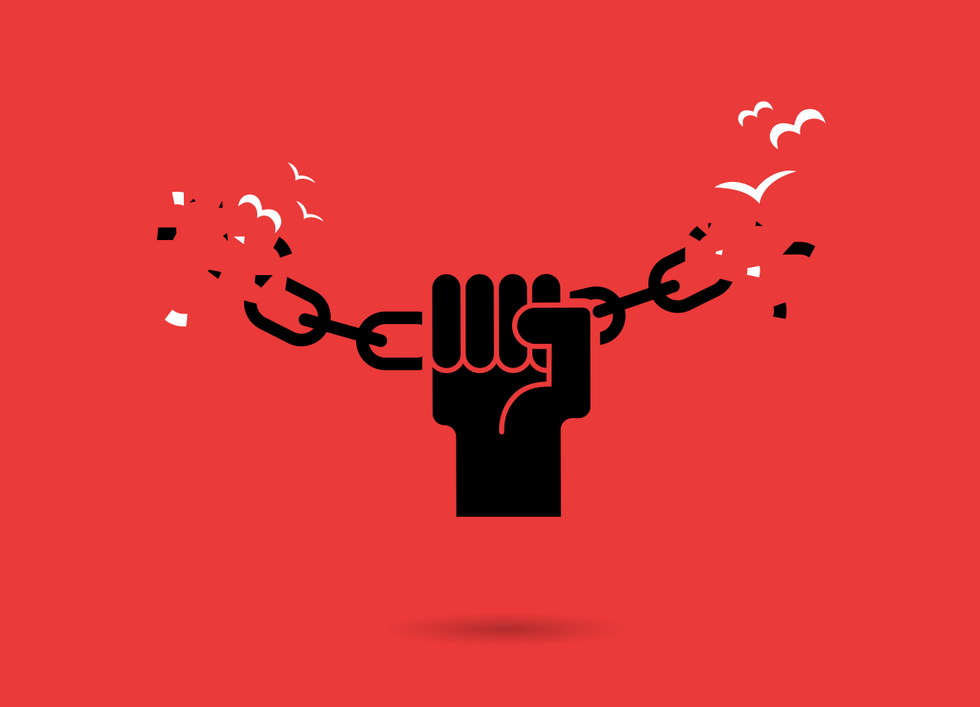 As an American, I feel ashamed that I have just heard about "Juneteenth" last week. And no, after doing some research, our poor excuse of a "leader," who condoned white supremacists during Charlottesville and recently cleared an assembly of peaceful black protesters just so he could do a motherfucking photoshoot at a church (out of all places) did not popularize this event. In fact, something as significant as Juneteenth isn't even a national holiday in our country. The most reverence this day receives is in Texas, the event where it first took place 155 years ago. So, as a writer for the Odyssey, I feel that this is my obligation to explain Juneteenth (in the best way I can) in an article.

On January 1st, 1863, during the Civil War, President Abraham Lincoln passed an executive order called the "Emancipation Proclamation," which declared that:

"…all persons held as slaves within any State or designated part of a State, the people whereof shall then be in rebellion against the United States, shall be then, thenceforward, and forever free…"

However, due to the Confederate state's rebellion of the Union, this order was heavily denounced, especially by the states who heavily relied on slaves for their income and daily life. Fast-forward two-and-a-half years later, with the growing number of Union power and self-liberation of black slaves and the weakening of Confederate authority. On June 19th, 1865, Major General Gordon Granger of the Union arrived in Galveston, Texas, and declared, as per "General Order 3":

"The people of Texas are informed that in accordance with a Proclamation from the Executive of the United States, all slaves are free. This involves an absolute equality of rights and rights of property between former masters and slaves, and the connection heretofore existing between them becomes that between employer and hired laborer."

With this speech in Confederate Texas, one of the deepest parts of the country, it helped signify the end of slavery. This began an era of hope and possibilities that awaited black people, black Texans, black free-men and free-women across the nation.

However, sadly, this is yet another event that has been overshadowed by history, now desperately needed to be forever etched in the present. As a country, we cannot forget about the key moments of black history that shaped our future.

The most infamous event concerning race in our state (Oklahoma) was the "1921 Tulsa Race Massacre." On May 31st, 1921, a black man named Dick Rowland was accused of sexual assault by a white woman named Sarah Page, which infuriated the local white community. Rowland, a black man, was subjected to intense scrutiny, to the point where he was threatened by lynching, despite the lack of evidence. What did unfold was a clash between angry armed white mob and armed black men attempting to protect Rowland at the courthouse where he was currently detained at the time. Chaos reigned as the white mob destroyed the Greenwood District, a once prominent and thriving black community burnt to the ground, terrorized black lives, and created panic across Tulsa, and neighboring cities. To this day, no one knows what happened in that elevator where Rowland and Page were at. What is known is that Page did not prosecute the case, and Rowland left town after he was exonerated. A rough estimate of 300 people, the majority black people, where to have been killed in the quick span of two days.

I didn't learn this event until my freshman year in high school in my "Oklahoma History" class which (thank God) was mandatory for all students to take. I was also surprised that not a lot of people knew about at my university, which is the largest in our state. I can understand foreign-exchange students being unaware of what happened, however, it should be a well-known fact among all out-of-state American students, especially Oklahoman-American students. For the longest time, the Tulsa Race Massacre was censored for almost a century, left unchecked in museums and textbooks. The most damning nail in the coffin was renaming the event "Tulsa Race Riot," which placed further blame on black people at the time.

As Americans, we should be more aware of black history. Our country was literally built on and by black history. Sure, we want to fast-forward to the future and proceed for the best. However, if we do not acknowledge the past for what it is worth, and ignore the mistakes, how else are we going to learn? We won't. The scars of the history remain relevant, as long as they are acknowledged. As such, today, the 155th anniversary of Juneteenth, the Tulsa Race Massacre, and other events we breeze over, must be recognized for their significance for what they are worth.