His Netflix specials are comedy gold! 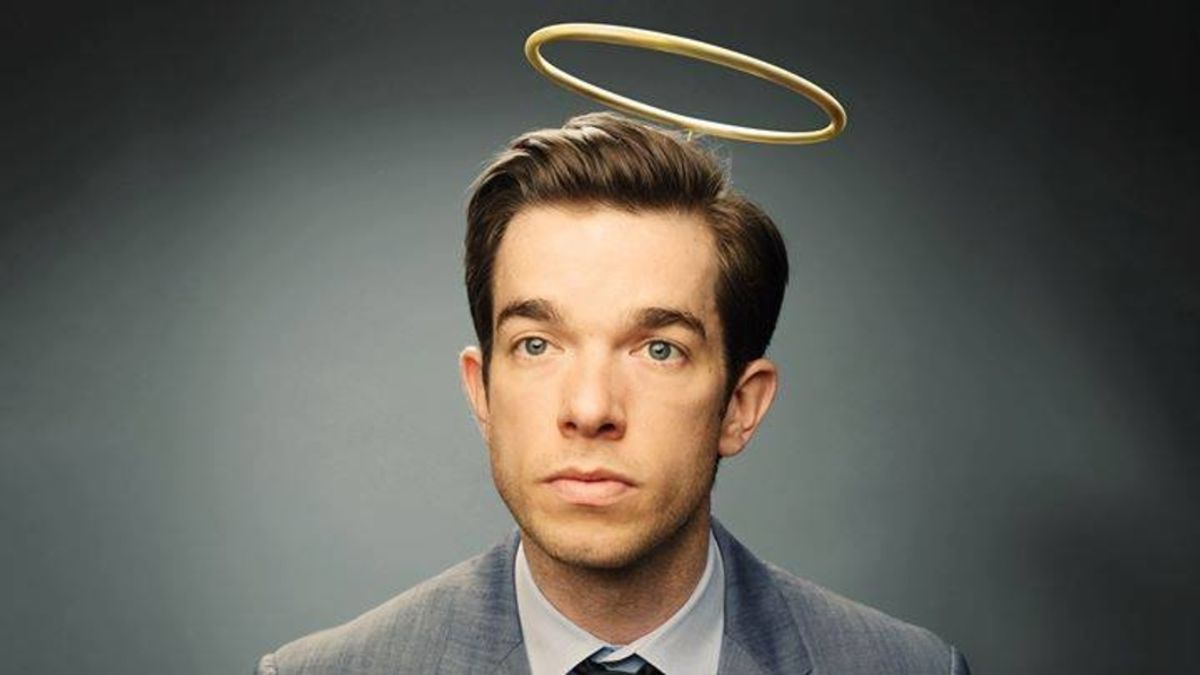 The spring semester is finally over! No more finals, essays, or labs for at least three months (unless you're taking summer classes; in that case, I'm so sorry).

Sure, there are trips and jobs and all of that stuff, but summer also brings a lot of time to do nothing but watch Netflix and laugh. For those times, there's John Mulaney.

John Mulaney is a hilarious writer and comedian. In addition to multiple successful tours and Netflix specials, Mulaney is also the mind behind many beloved Saturday Night Live characters and sketches, such as Bill Hader's Stefon.

If you're ever bored and need a good laugh, he has THREE hilarious stand up comedy specials on Netflix: "New in Town," "The Comeback Kid," and the newly added "Kid Gorgeous." If you don't have enough time to watch a full special, here are thirteen of his best, most hilarious moments.

A Sir Patrick Stewart impression, jokes about being old, gazebos, and a rhyme about robots protecting our own information for us - the entire monologue is brilliant!

Standout quote: "The world is run by robots, and sometimes they ask us if we're a robot just 'cause we're trying to log on and look at our own stuff!"

2. When he described a brilliant childhood prank.

This might be his most popular story. It's hilarious proof that children can be brilliantly devious.

Standout quote: "Y'know, for years scientist have wondered can you make grown men and women weep tears of joy by playing Tom Jones's "It's Not Unusual," and the answer is yes, you can. As long as it is preceded by SEVEN "What's New Pussycat"s."

3. When he talked about words, Ice-T on SVU, and crime before forensics.

The whole thing is brilliant, but the best part is that he basically provided us with an outline of what could be the greatest episode of Law and Order SVU ever.

Standout quote: "If you're comparing the badness of two words and you won't even say one of them, that's the worse word."

4. When he determined that thirteen-year-olds are the worst.

Middle schoolers are possibly the scariest kids ever, and these jokes hilariously explain why

Standout quote: "Eighth graders will make fun of you but in an accurate way. They will get to the thing that you don't like about you. They don't even need to look at you for long, they'll just be like 'hahahaha hahaha hahaha! Hey, look at that high-waisted man! He got feminine hips!' And I'm like, 'NO! That's the thing I'm sensitive about!'"

5. When he talked about the joys of doing nothing.

It's probably the most relatable thing he's ever said.

6. When he tried to pronounce "Murfreesboro."

I don't know anyone who actually pronounces it like that, but it's hilarious to hear him try! Also, the story he makes up about the origin of the name is brilliantly funny

Standout quote: "I start to perform stand-up comedy, okay? And one guy yelled from the back what is the best heckle I've ever heard in my life. He yelled, 'excuse me, sir. I think I speak for everyone here when I say that we would enjoy silence more than the sound of your voice.' . . . Insanely mean, no? But also, how very eloquent!"

7. When he "made up" a terrible airline company.

The point of this is really supposed to be how much of a pushover he is without his girlfriend, but the main lesson I get from it is to avoid Delta airlines.

Standout quote: "And then I go over to the Delta help desk, which is an oxymoron, and I go, 'can I please go home on an airplane?' And they go, 'No! In fact, we're gonna frame you for murder, and you're gonna go to jail for thirty years!" And I go, 'why are you doing this to me?' And they go, 'because we're Delta airlines, and life is a fucking nightmare!'"

8. When he summed up America's current political situation in the most bizarre way.

This might be the best, most accurate summary of the current political climate

9. When he explained why he quit drinking.

This unbelievably hilarious story is my personal favorite. Everything about it is perfect. It kills me every time I hear it!

Standout quote: "And I had that thought that only blackout drunks and Steve Urkel can have. . . Did I do that?"

10. When he talked about how terrible he is at driving.

Standout quote: "...cars were pulling up and looking over to see who just did that piece of shit move, expecting to see like a hundred-year-old blind dog who's texting while driving and drinking a smoothie. Instead, they see a twenty-eight-year-old healthy man trying his best."

11. When he talked about his real estate experience.

These jokes are perfect for anyone obsessed with HGTV! Bonus: his "real estate agent" voice definitely sounds like Linda Belcher from Bob's Burgers.

12. When he described himself as a "tall child."

The thing Mulaney does best is self-depreciating humor, and these jokes are proof of that.

Standout quote: "I don't look older, I just look worse, I think. Honestly, when I'm walking down the street, no one's ever like 'hey, look at that man!' I think they're just like, 'whoa, that tall child looks terrible! Get some rest, tall child! You can't keep burning the candle at both ends!'"

13. When he shared his thoughts on babysitters and "Home Alone 2."

Yes, this is the second time he's used horses to represent people who don't know what they're doing. It's a little weird but absolutely hilarious.

Standout quote: "Thirteen when I'm ten? That's just like hiring a slightly bigger child! That would be like if you were going out of town for the week and you paid a horse to watch your dog. Like, "alright, here's the number for where we'll be, and here's where we keep the dog food, and you're a horse."