Why J.J. is the REAL Main Character of Outer Banks

Why J.J. is the REAL Main Character of Outer Banks 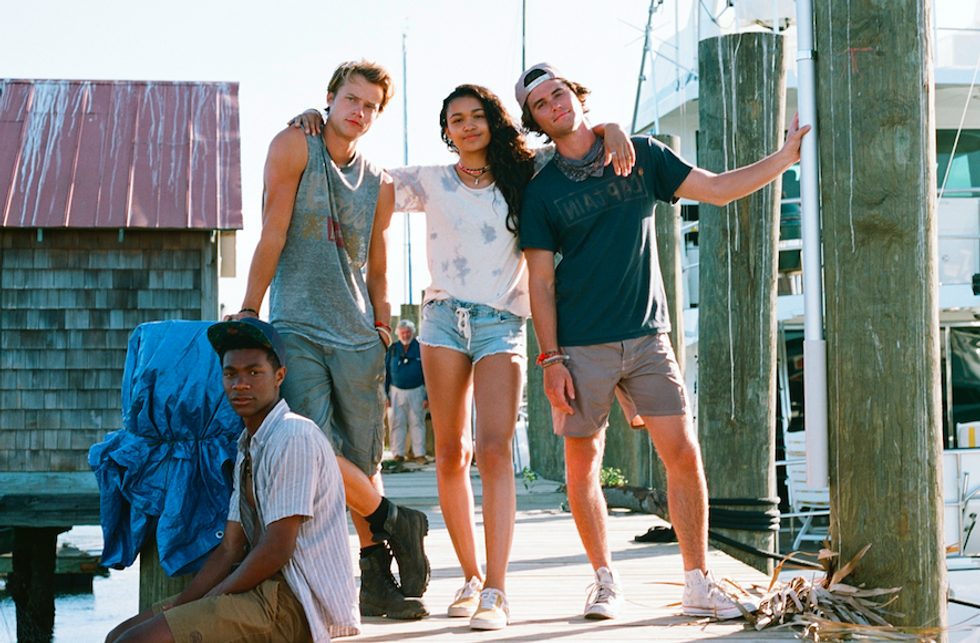 So like many other young people stuck in quarantine, I've just recently just finished binging the Netflix original tv show "Outer Banks." For those who haven't had the pleasure of seeing it yet, the show essentially revolves around two groups of teenagers (referred to as pogues and kooks) who live in the Outer Banks, and all of the mischief/ teenage drama they get into, including a search for lost gold. The main teenagers are best friends John B, Kie, J.J, and Pope. John B, and his love interest Sarah Cameron are supposed to be the main characters of this story, however, I think differently.

The real star of the show is actually none other than J.J., John B's best friend. And there's a few reasons I think that he is actually the main character.

When you watch the show, John B is very clearly made out to be the main character by the show's creators. He does the voice over at the very beginning, and we start to hear about his life first. We hear about how for some reason his father is missing (and we don't get a lot of information on that until basically the end of the series), and that his uncle who is supposed to be watching him (who we hear literally nothing else about, and if I remember correctly, we barely even get a name for) is actually in Alabama working on houses. His mother is also not really in the picture, and we also don't learn much about that. We learn that he has a very tight nit group of friends, and that him and his friends are pogue. And that may seem like a lot, but for a main character, it really isn't much. Yes, John B is very likeable and attractive (in my personal opinion) but there's almost no depth to his character. There's nothing underneath the surface level characteristics that are supposed to make him attractive, likable, and somewhat ~mysterious~. But by leaving out these key characteristics and his backstory, the writers of this show failed to make their main character great.

Leaving out so many essential details to John B.'s backstory as well as personality in general, really dull his shine. Yes he is very likeable and he is (in my opinion) the most attractive out of the group, but there's just something missing.

But where that something is missing with John B, J.J is spilling over with it. Although J.J. is not intended to be the main character of that show, he is the only one there with even the slightest bit of emotional depth to him as a character. Every other character on the show has very very surface level characteristics that make them likable, but they lack that connectability. But not J.J.

J.J is also a pogue living in the Outer Banks. A "pogue" basically means that you're poor, and don't have the best life. J.J. falls into this category well. He has an awful home life. His mother is not in the show at all and from what we learn, it seems that she left. His father is not only extremely physically abusive (multiple times in the season beating J.J. to the point of bleeding and leaving marks) but mentally abusive as well, constantly telling him his mother left because of him and that he will never amount to anything. J.J lives in an incredibly toxic home with an abusive, manipulative father as his only parental figure, and the only person he can look up to.

Everybody in the community looks down upon him because of the way his father is and expects him to become the same way. Because of this, J.J. is constantly having to prove people wrong,prove that he is good, and worthy of love and respect. And when he does sometimes mess up (like we all do), it hits him so much harder than anyone else in the show because he feels that he has failed, and is beginning to follow in his father's footsteps.

The thing is- J.J. is a good person. He has it a lot harder than the rest of his friends in their group, but despite that, he tries his hardest to do what's right. Yes there are times when he knowingly does things that aren't the best morally (such as stealing a gun and money from a crime scene), but when it comes down to it, J.J. always comes through and does the right thing.

One of the best J.J. scenes that I believe best show his true character, is when he takes the fall for sinking the boat for Pope. Despite the fact that it wasn't his fault, J.J. took the fall for Pope because he knew how much this would mess up for Pope. Pope's parents are a lot more strict, and he would lose his scholarship, which is all Pope cared about. This would ruin Pope's life. But for J.J., this is just what people expected of him. People always thought he would turn out like his deadbeat dad, and this was just him living up to their expectations. And he'd rather let people think those awful things of him (even though they weren't true), then let his friend have everything ruined for him.

People can relate to him because so many people have dealt with living in poverty, as well as living in a toxic, abusive home. Many people know what it's like to be spoken to the way J.J.'s father speaks to him. People can relate to the way it feels when it feels like the whole world is against you, just waiting for you to fail. There's so many different aspects of J.J.'s character that are painful real, and that unfortunately so many people (including teens like him) can relate to. Because of this, they take comfort in J.J.'s character and root for him to do good, and rise above.

J.J. is a good friend, and despite everything he goes through and deals with, he's a good person. He tried to do his best in life even though it feels like the whole world is against him. He's had it hard but he's strong enough to power through it and be a good person. It's because of this and so many other reasons that J.J. has an actual personality and emotional depth. J.J. is not just another teenager or pogue in the Outer Banks. J.J. is a troubled boy with deep emotional issues, constantly being told he'll amount to nothing, with no reputable person in his life to look up to or take care of him. But despite it all, he rises above it and tries his best to be a good person and a good friend.

And that is why J.J is the REAL main character of Outer Banks.