Is Apple Taking A Stance Against Interracial Spa Treatment?
Odyssey
CurrentlySwoonLifestyleHealth & WellnessStudent LifeContent InspirationEntertainmentPolitics and ActivismSportsAdulting
About usAdvertiseTermsPrivacyDMCAContact us
® 2023 ODYSSEY
Welcome back
Sign in to comment to your favorite stories, participate in your community and interact with your friends
or
LOG IN WITH FACEBOOK
No account? Create one
Start writing a post
Lifestyle

Is Apple Taking A Stance Against Interracial Spa Treatment? 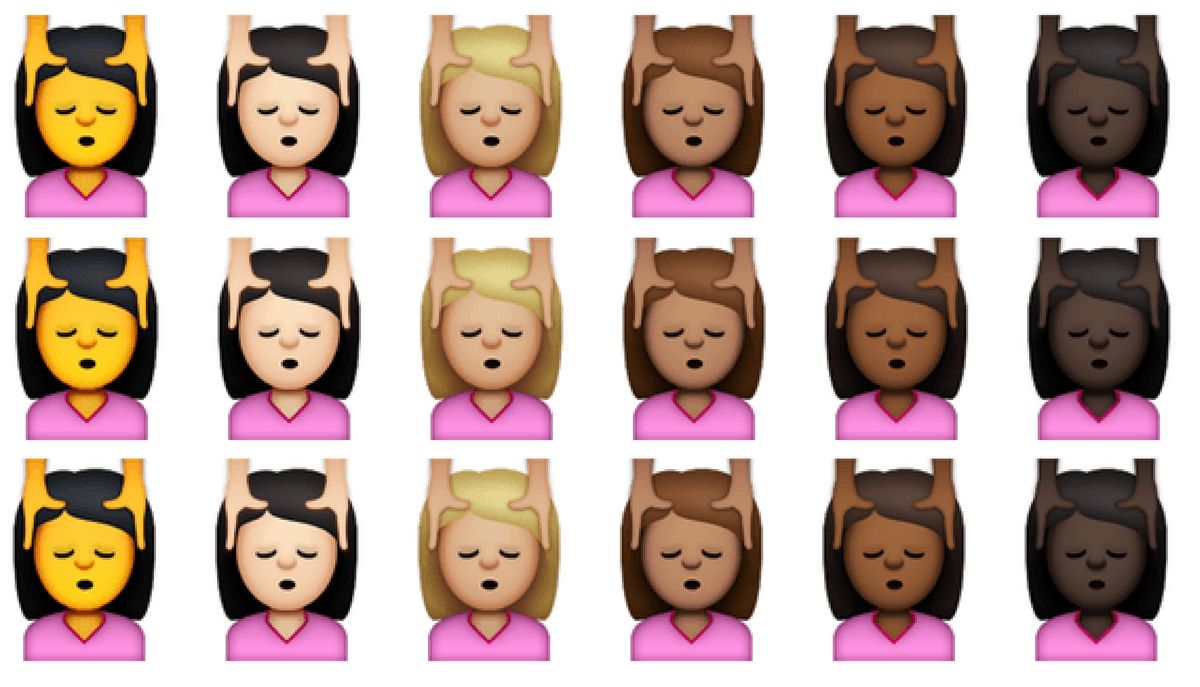 Back in February of 2015, Apple released an update to all iOS devices that included an update to the emoji keyboard, allowing users to customize the race of emojis. This was a met with a mixed response, with many praising the progressiveness of the update, and others, like Washington Post writer Paige Tutt, suggesting otherwise; Tutt writes, "Now, if I use two smiley faces to represent me and a white friend, I have to contemplate what color emoji to use."

But one problematic element that seems to have gone under the radar, is the head massage emoji.

As it appears, any of the more humanoid emojis that feature only one individual, allow for race customization, like this baby.

Emojis that feature more than one individual, like the family units, do not allow for race customization.

(none of these families will open up an expanded menu)


My theory here is that, in order to do the customization justice, the emoji developers would have to allow each person to be individually customizable, and that was too complicated. If one could change all the people as a unit, it would appear to discourage interracial families, friendships ect. To remain inclusive and to avoid making the emojis overly complicated, they are left as the neutral yellow tone.

Which is why the massage emoji is all the more confusing.

Which leads me to three separate theories.

1. Apple made a silly mistake.

I don't like this theory. With a topic as sensitive as race, I'd expect a company like Apple to focus on every single tiny detail, including this emoji. What really bakes the cake for me is that on the Facebook emojis (a veritable clone of the Apple emojis) the "mistake" carries through.

The only real difference here is the added towel on the head and the eyepieces. So if two huge companies made the same mistake, can it really be considered an accident?

This, of course, is absurd. Why would a company with so many other things going on take a political stance on something as specific and intricate as interracial spa treatment? But that still doesn't answer the question of why this emoji is race customizable, which leads me to my third theory.

3. Portals. The massaged and the masseuse are one in the same.

This is my only logical, reasonable conclusion. In the massage emoji, the person is reaching down into a portal and massaging him or herself.

This would also explain why the arm width of the masseuse lines up almost perfectly with the massaged.

So what do you think? Leave a comment below on which theory you believe. If you have one that's not listed, please share!