Review: In 'Sicario,' There Is No Black And White.
Odyssey

Review: In 'Sicario,' There Is No Black And White.

Denis Villeneuve makes the case for bad justice - and his legacy as a great director. 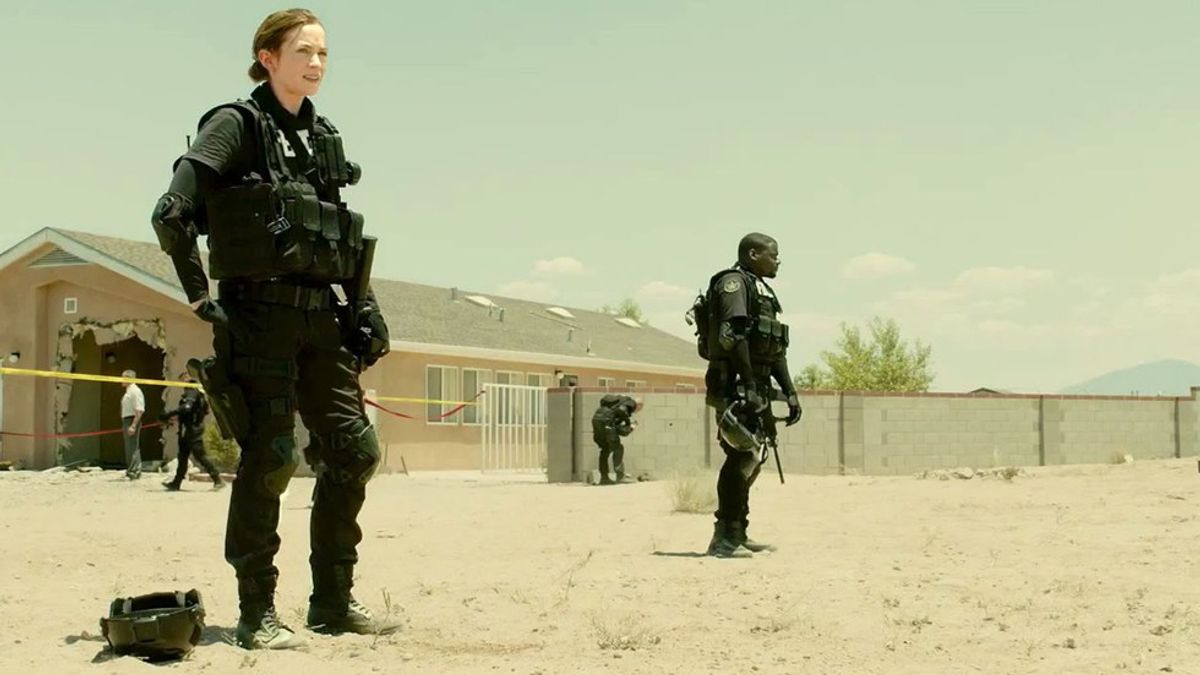 The name Denis Villeneuve probably doesn't sound entirely familiar to you yet. If you haven't paid much attention to the film industry lately, you would be forgiven for thinking that the slightly French-sounding moniker was nothing more than a confusing last name. But I encourage you to remember it from now on; He hails from Canada, his last name is pronounced "viel-new-ev", and he is steadily becoming the Kubrick of our generation.

This is proven in last year's war thriller, Sicario. Very much in the vein of films like The Hurt Locker and Zero Dark Thirty, but still standing apart, the film explores the horrors and repercussions of different kinds of combat; the war on drugs, the deep need for revenge, and the consequences American interference can have on a foreign land's citizens. This would be too much to handle for a lesser director, but Villeneuve has a steady hand, and a knack for finding the inner workings of his characters and bringing them out.

His 2013 film, Prisoners, is the same way. The dilemma in both films lies in a single question: What are you willing to do to achieve your goal? Whether it be getting back your family or keeping drugs and crime off the streets, how far will you go? In truth there is no easy answer; no one feels entirely justified at the end, and some are even left worse off than they were when they started. But it's also never entirely in their control, either. Outer forces, whether they be drastic situations or violent people, can come in and force you into a different shape. When you allow darkness in, you are never fully in control of yourself again.

In Sicario, this is never more relevant than in the relationship between agents Kate Macer (Emily Blunt, cementing her status as the strongest actress working today) and Alejandro Gillick (Benicio del Toro, giving the performance of his career). Kate volunteers for an interagency task force to apprehend the Sonora Cartel lieutenant responsible for the death of two of her officers in a bombing. She is frequently berated and dismissed by Gillick's partner, and overseer of the task force, agent Matt Graver (Josh Brolin, also never better), but is intrigued by Alejandro.

The two share an almost intimate relationship, like one between family, but it is ultimately sabotaged by Macer's distrust in her mysterious partners and Gillick's ulterior motives. In the film's penultimate scene, where Alejandro threatens Kate at gunpoint to sign off on their mission, he warns her to leave, saying, "You will not survive here. You aren't a wolf, and this is a land of wolves, now." He has basically forced her to sign her convictions away, and he would not have hesitated for a second to kill her if he had to. But he knows that, in spite of all the darkness she has faced, she is still not resigned to pursuing justice by the book, an ability taken away from him with the loss of his family, and he lets her live.

This theme of justice and ambiguity is also explored through color. Sicario is stating that there are no easy answers to the question it faces, that nothing is black and white. The film is often saturated in the color beige; in hotel rooms, hallways, the walls of a cartel house, the never-ending desert. Gillick and Graver are almost exclusively shown wearing beige, symbolizing their intentions to bend the law to their own narratives. Graver is especially open to recklessly interpreting the law for his benefit. When Kate asks him what he plans on doing before their mission, he replies with charm, "to dramatically overreact."

Kate's insistence on the upholding of justice is embodied in the color blue, a color that is gradually washed away as she is tested again and again. In the end, Alejandro is swallowed by darkness, both in his attire and by shadows, after he assassinates the man who took his family from him, along with his wife and children. He has become the very thing he swore to kill.

Villeneuve, as brilliant as he is, could not have accomplished this much on his own. Roger Deakins (who also worked on The Shawshank Redemption, No Country for Old Men, and Skyfall) offers beautiful wide-angle shots of landscapes, and often lets the camera linger, to memorable effect. Johann Jóhannsson (who also worked with Villeneuve on Prisoners) delivers his soundtrack in a unique way; by hardly being present at all. The soundtrack is only fifty-four minutes long, less than half of the film's runtime, and is placed tactically throughout to raise the pulse and surround the ears with the staccato of gunshots and horns. Sicario also marks Taylor Sheridan (David Hale in Sons of Anarchy)'s first feature film writing credit. A masterclass team was brought together to tell this complex story, and we are left to be rewarded for their work. In conclusion, Sicario is an excellent film, one that shows us that the great grey divide between good and bad is wider than we know, and filled with questions with uneasy answers, or even no answers at all.

Unfortunately, it was snubbed at the Academy Awards last year, after being nominated for Best Original Score, Best Cinematography, and Best Sound Editing. But Villeneuve still has more chances to spin his art into gold; his latest project, the sci-fi thriller Arrival, starring Amy Adams and Jeremy Renner, hits theaters November 11th. He is currently directing the sequel to Blade Runner, due to be released next year. Remember his name, and practice the pronunciation when able.