In Loving Memory Of Kris Bercov, The Woman Who Sparked My Love For Writing

In Loving Memory Of Kris Bercov, The Woman Who Sparked My Love For Writing

She helped me become a better writer and better person. 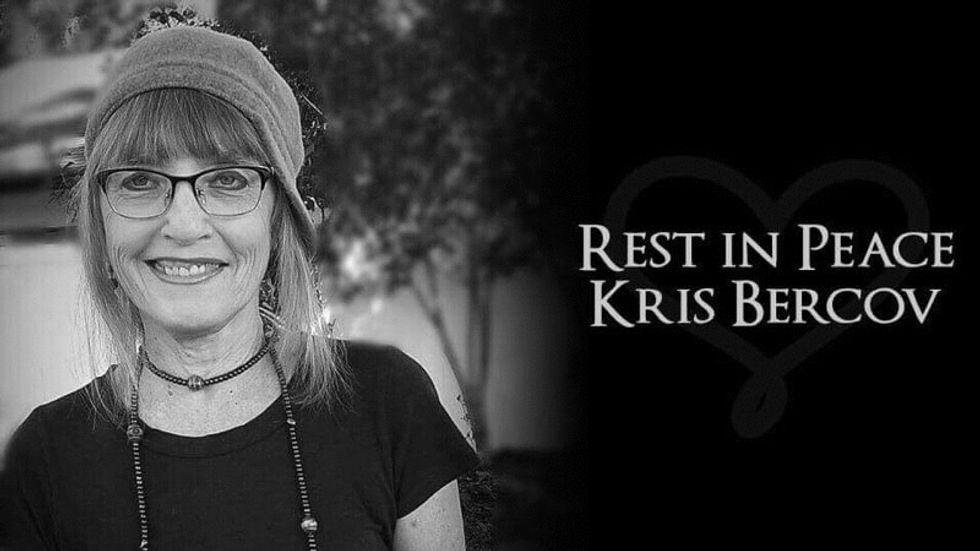 The sudden passing of anyone, especially a family member or friend, is a tough experience. This gets pushed to an even higher extreme when the way you find out about their passing is via social media. But that is exactly what happened to me this past Friday. I was sitting in my living room and talking to some close friends while browsing my Facebook feed. While going past all the politics and relationship issues that dominate my social media, one message stood out that I could not ignore: "Kris Bercov had died."

I did not comprehend what I had read the first time. I read the post again ensuring that I had not misread this. And then I read it a third time still not believing what I was seeing. At this point, I needed to find out what was going on and messaged multiple friends who knew Kris. I wanted to know the truth. My fears were quickly confirmed.

At the time, I could not handle what had happened. It took me multiple days to put into words what Kris meant to me. It's a bit confusing. I am not family and calling myself her close friend is disingenuous to those who actually were close friends. And still, she was a writer who had a profound impact on my writing and a voice in the community that will not be able to be replaced. Even as I put these words down, I feel like I did not know her well enough to properly write about the remarkable person that she was. But I will try my best because, without her guidance, I would not have the ability to write what I do now (this article included).

I first met Kris at Writers of Central Florida or Thereabouts, a writing group that is among my greatest supporters. It is no small thing to say that without the guidance of so many of the people in this group, that I would still be working retail. I would never have been able to realize my dreams of being a writer. It is not stretching the truth to say that I have incurred a debt that I will never be able to repay. Kris paid a significant role in that debt. I'll do my best to explain here as I wipe away the tears.

Anyone who has read my work knows two things about me. One is that I am an incredibly cynical man. The second is that the things I write happen to frequent the realms of morbid and horrifying events and themes. Something that used to hold me back from truly expressing my writing was the fear that I would do this poorly. I feared that instead of telling powerful stories, I would do nothing more than let my feelings overwhelm my writing.

The reason I started writing such dark stuff was as a coping mechanism. I saw some of the worst that humanity had to offer when I was growing up. I still bear mental scars and trauma from that dark part of my history. But to translate that pain onto the page required another opinion. Kris was that opinion.

Kris was a poetic soul who had some of the most compelling stories to tell whenever she went on stage. There usually were a couple of laughs as well whenever she prepared to read. The microphone did not like cooperating with her. However, once she began to read, the poems were hardly jokes. They dealt with serious issues of love, loss, and learning to hope again. These emotions were the ones I properly needed to understand and utilize.

Upon learning about her skills in social work, I also spoke to her about how to properly depict mental illness in writing. I am one who gets upset when personality traits are depicted incorrectly. The fear of doing this myself left me stuck in the paralysis of writer's block. But thanks to Kris being brave and willing to read my stories, a genre that she normally did not enjoy, I learned a lot about what I was doing - both wrong and right.

In the present, I look at what I have written. I have created very realistic depictions of Anti-Social Personality Disorder, Autism, Schizophrenia, and other conditions. I cannot thank Kris enough for her feedback and willingness to work with me. This is especially notable because, by my nature, I am a pushy person and probably distracted her from other tasks she wanted to do. Her nature was that of patience and kindness. I would never have been able to get the feedback I did otherwise.

If I had known that when I walked out of Stardust on Wednesday, July 11th, that it would be the last time I would speak to Kris, I would have hugged her tight and thanked her for the sheer amount of patience. Instead, I left rather quickly. I will probably never forget this harsh lesson in how quickly things can change. It still feels weird to realize that from now on at Stardust Coffee, the poetry you always brought to the stage will be gone. And your smile which was contagious even on days where there was little to feel happy about, will be sorely missed.

Writers of Central Florida or Thereabouts will not be the same without Kris Bercov. While we will continue to write, because that is what writers do, we will also continue to remember. With her passing, the world has truly lost an angel. And I mean the heroic kind for a change.

I am honored that I got to know you and consider you a friend in the final years of your life. I will never forget you for as long as I live. Thank you for everything Kris. I wish I could have told you in person. Rest in peace.