If Something's Meant To Be, Then Let It
Odyssey

If Something's Meant To Be, Then Let It

Trust yourself every once in a while, cling to your instinct, buckle in, and enjoy the ride as best as you can. 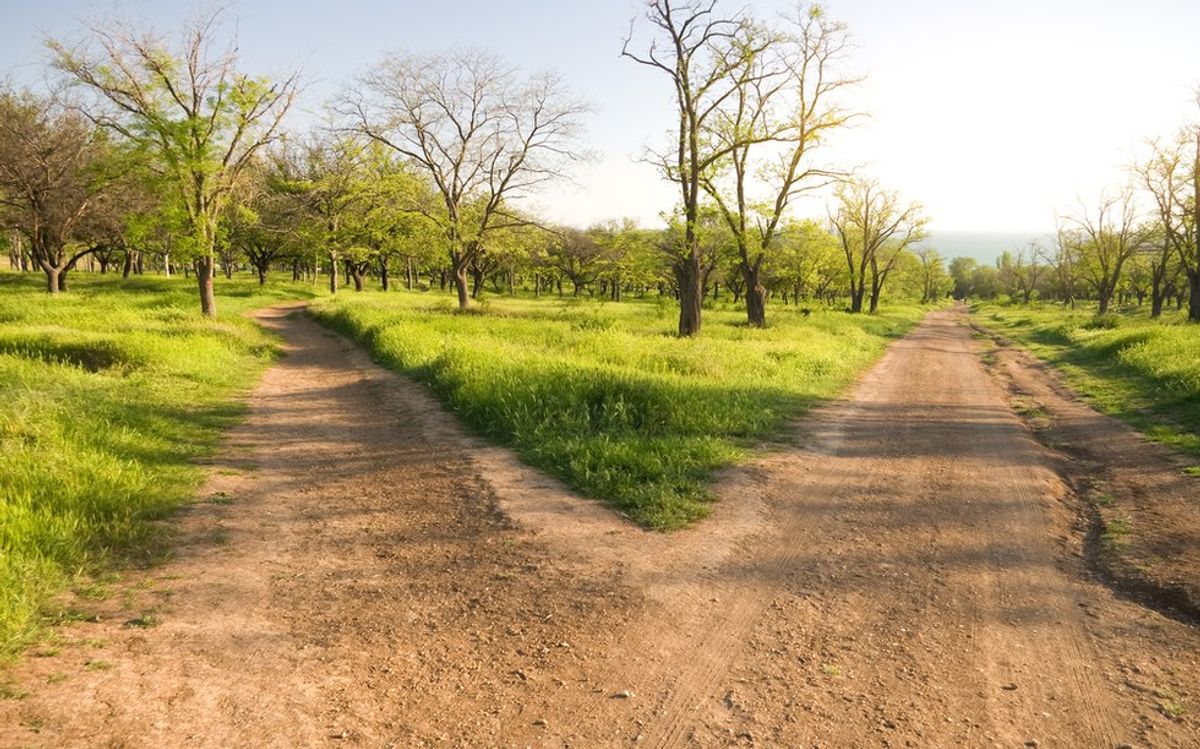 Yogi Berra, a widely known baseball manager, once said “when you come to a fork in the road, take it.” While this quote doesn’t exactly help us make decisions, it makes us laugh a little when we find ourselves in sticky situations. Earlier this week, I found myself confronted with a fork that I never expected I’d encounter and one that left me feeling a little confused.

Being a Geography major student, it makes sense that the best way for me to learn about our world is by traveling and exploring different countries for myself. The thought of traveling alone is something that’s terrified me for years, but I knew that if I didn’t start now, I never would. I also thought that my first time traveling abroad doesn’t have to be entirely alone. With that said, over this summer, I started applying to study abroad in Ireland for the spring semester. It was a long and tedious process that included writing five essays, getting transcripts ordered and delivered, paying a hold deposit, filling out paperwork, and reading what seemed like a book full of information. I somehow trusted that I’d feel like a little girl in the middle of the world’s biggest toy store once I landed in Ireland, so I thought that all of this work was worth it. As the days passed and the time got closer, I started getting more nervous, scared, and excited. I had never been out of the country for more than a few days and my parents were with me that time. I started having doubts- what if I get homesick? What if I don’t like Ireland? What if it’s miserable? What if four months is too long? What if I can’t handle being 5,000 miles away from home? I can’t say that these worries ever went away- they were always on the back burner in my mind, making me more anxious in some moments than others. For some reason, though, I kept going through with the application. I met with my advisor, filled out the application to the University College Cork, and had it all ready to turn in to the study abroad office. I was now feeling like the little girl who had lost her mother in the middle of the grocery store and was scared beyond belief. I realized that this was the biggest leap I had made yet, but for some reason, I wanted to do it. Deep down, I think I enjoyed the thrill of it all and found pleasure in seeking an adventure this grand.

Then, Monday happened. When I got out of my first class, I checked my emails so that I could delete all of the junk messages. When I opened my inbox and saw the name of one of my professors from last semester, though, my first thought was one mixed with confusion and fear. Why was she emailing me? I don’t remember doing anything wrong! When I read her message, though, those initial feelings were erased and I was overwhelmed with excitement, humbleness, and gratitude. Her message said that she is in need of an undergraduate research assistant and wanted to see if I would be interested in working with her before she made the opportunity public. Through my years in college, I’ve been told that it’s good to seek out opportunities such as this one, but I never did, mainly because I didn’t know what made me qualified for such an honor. Anyway, I emailed her back and said I’d be strongly interested, so we met on Tuesday to discuss the project further. I was already intrigued and enthused for this opportunity, but on Tuesday, she made it better. She explained that our end result will be to publish an article, as co-authors, in a scientific journal. I didn’t know what to say after this. I was beyond thankful and excited for such a privilege. As our discussion continued, she commented that this semester would be focused on us gathering our research and we would publish the paper in the spring semester.

When I walked out of the meeting with my professor, I had a weird itch. Part of me didn’t want to study abroad anymore and preferred to publish a paper as undergraduate. There was another part of me, though, that remembered how much time and energy I have already put into studying abroad and reminded me of how excited I had been ever since I started the application. In the moments following, I had no idea of how I felt. I was all over the place, my heart was sliced in half, and I had reasons for wanting both sides. To further complicate things, the last day to get my deposit for study abroad refunded was Thursday, so I had less than two days to decide which path to take.

Tuesday and Wednesday were the most confusing, frustrating, and the longest days ever. Every time I thought I had made a decision, the little voice in the back of my mind tried steering me the opposite direction. There were times when I doubted if I’d ever be able to make the decision.

On Wednesday night, though, I emailed the study abroad office and said that I need to cancel my application for the spring semester. I am still not sure as to how exactly I came to this choice. When I considered both sides as a whole, though, studying abroad had a few what-ifs that remained to be solved at this point. I needed to find someone to take over my lease while I was abroad, I didn’t know how much it would cost after scholarships, and I hadn’t been accepted by the host university yet. If I had never been presented with the opportunity to publish a paper, I would’ve taken these risks, mainly to see how the situation panned out and to hopefully travel to Ireland. I also considered that Ireland will always be there for me to visit while the research opportunity is a “now or never” sort of thing. In a sense, I guess the publishing opportunity seemed like it was meant to be. I mean, I received the email three days before I had to cancel my study abroad application, it was with a professor whom I learned a lot from and whose class I enjoyed strongly, it was on a geography-related topic, it involved writing, and it meant that I would stay at a university that I’ve become accustomed to calling home.

Making this decision was the hardest, most violent game of tug-of-war that I’ve ever seen. I don’t know if I made the right choice, but I guess only time will tell. If the cards deal out in my favor, then perhaps I’ll travel to the Emerald Isle in the summer instead. If not, though, then oh well. I’ll get there someday.

While choosing which route to take in this case was extremely difficult, I am thankful that I was forced to make this decision and was presented with both opportunities. I tried to listen to my heart on this one, but it was a bit muffled this time around. If there’s anything I’ve learned this past week, it’s that I am a spoiled girl who is consistently being gifted with unique, honorable, and special opportunities. I wish that I could take part in all of them, but sadly, that isn’t an option. Life has presented me with a series of privileges that I sometimes doubt if I deserve. Though it’s taken some time to stick, I think I caught on this time around- if something’s meant to be in life, then let it happen. Trust yourself every once in a while, cling to your instinct, buckle in, and enjoy the ride as best as you can. And remember, if you ever see a fork in your road, then take it.