If America Had A Chat With Lady Liberty
Odyssey
CurrentlySwoonLifestyleHealth & WellnessStudent LifeContent InspirationEntertainmentPolitics and ActivismSportsAdulting
About usAdvertiseTermsPrivacyDMCAContact us
® 2023 ODYSSEY
Welcome back
Sign in to comment to your favorite stories, participate in your community and interact with your friends
or
LOG IN WITH FACEBOOK
No account? Create one
Start writing a post
Politics and Activism

If America Had A Chat With Lady Liberty

Because recently, the U.S.A has been a little naughty. 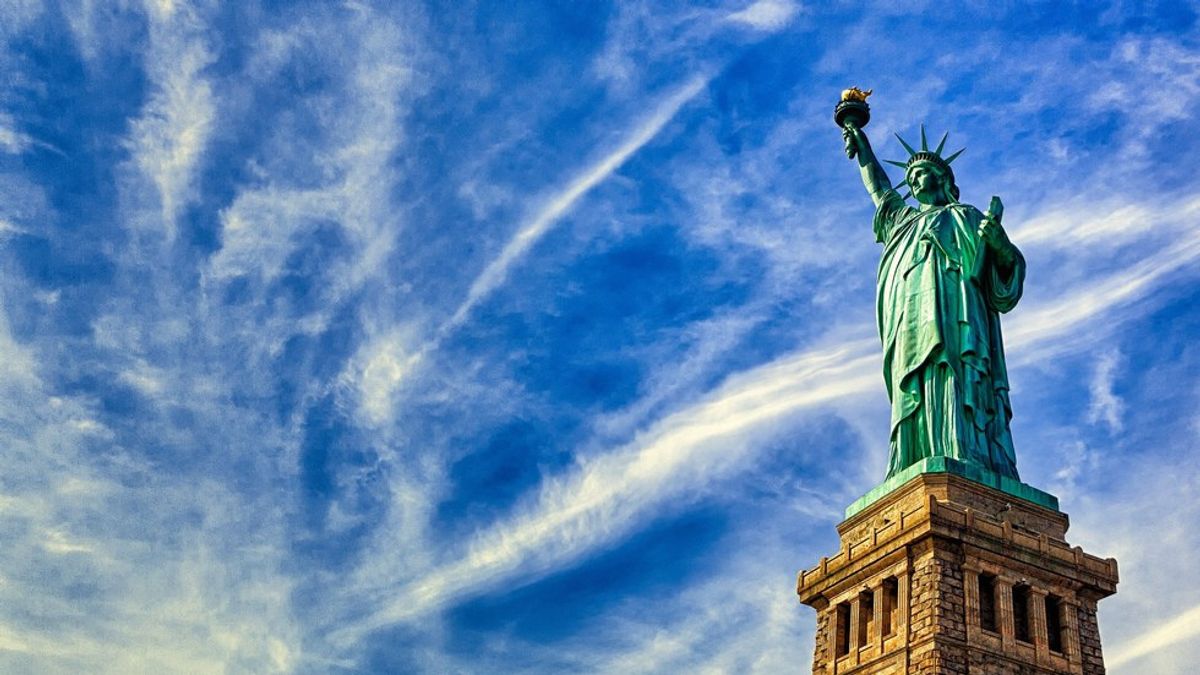 Recently there have been some very tragic events going on in America. Police are shooting citizens and snipers are killing innocent people. If Lady Liberty could talk, I feel that she would be very upset with America. This a satirical letter of what I think Lady Liberty would wish to share with the United States. It is not a letter to give a solution to all of the recent problems, but to hopefully give you a little hope.

In light of recent events, I think America needs to have a little chat with Lady Liberty...

"Now, you are not in trouble, I am just disappointed in you. I am disappointed in your people, people you call Americans, and the way that you feel you need to deal with your problems. I thought I raised you better than that. This country was built off of ideas of freedom and liberty. Not people burning the flags of the country that gave them freedom. The Fourth of July is not the only day to show your pride for your country. Now you are going to sit here and listen to all that I have to say.

First, not all of your people are bad. There are some very good people. But, there are also some very bad people. Please, I am begging you to do all that you can to be those good people. But, instead, you feel the need to fight with each other just because you are a little different. Maybe if you took the time to learn about each others' culture and where they are coming from, you would understand. You need to understand each other's differences, simply knowing that they are different is not enough. Take a walk in each other's shoes, if you will. You built the United States of America on differences.

Second, violence is not a way to deal with your problems. Do not just shoot innocent people because you are mad at a completely different person. People are hurting their neighbors. They are shooting up schools and clubs, and they are going against the very people that I put there to serve and protect you. You need to talk it out. Be peaceful. You have the right to your feelings and to express yourself, but do not do it at the expense of someone else's freedom.

Third, stop with the hate. The only way you are going to get rid of the divide between people is when you stop hating each other and start listening to each other's feelings. You must understand why those people feel the way that they do. Now, why do you hate immigration? Don't you remember how you started out? All of you, immigrants. The United States of America was built on immigrants. So lets work together to make the United States of America actually united!

And you politicians! Stop fighting like little girls and give the people some hope!

Now don't make me pull over this freedom train again!"