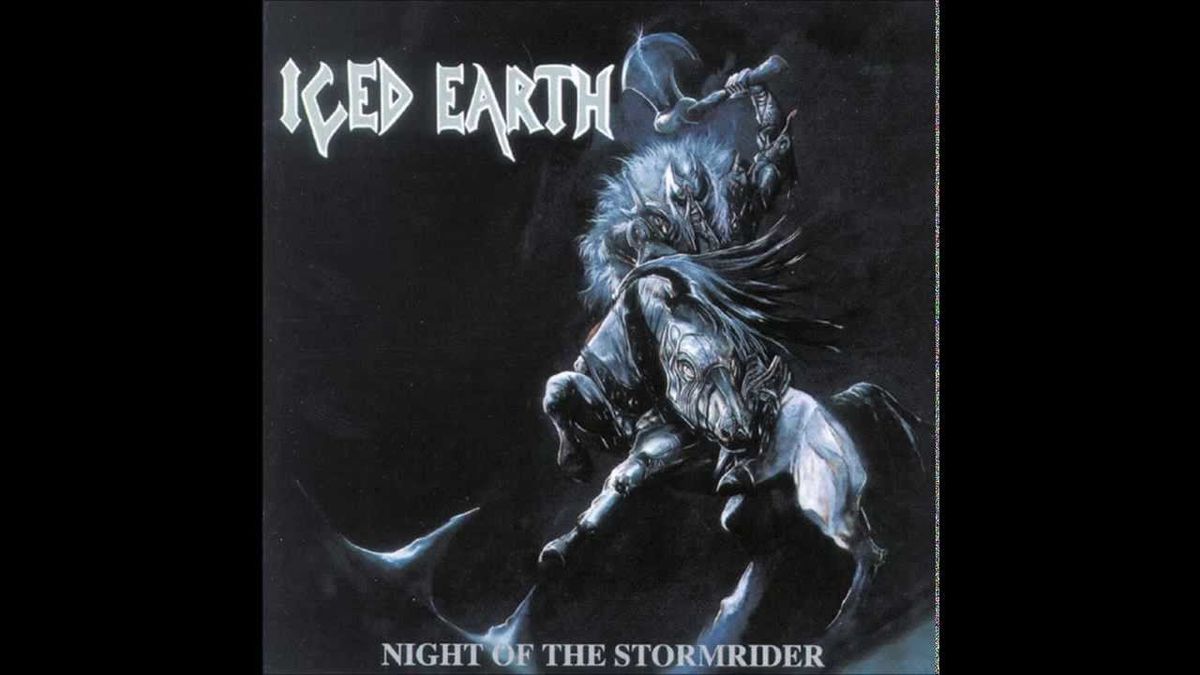 Night of the Stormrider is the second album by American power metal band Iced Earth. The band has made some notable changes since their first release. After Gene Adam's poor vocal performance on the last album, the band decided to replace him with John Greely. The band also replaced Mike McGill on the drums with Richey Secchiari after his pedestrian performance on the band's debut album. This improved lineup would result in an album that showed immense improvement over the band's debut.

The guitar work on this album is fantastic. Schaffer's terrific ability to write riffs that are both catchy and heavy continues to amaze me. Shawver's solos are fantastic as well.

Schaffer's songwriting on this album is fantastic. Night of the Stormrider is a concept album that follows the path of a man who is betrayed by religion and turns away from it in anger. The dark forces reach out to the man and use him as their vessel to bring death and destruction to Earth. Even after all of the horrific deeds he has done, he feels no remorse for his deeds, and when the end comes, he numbly accepts his fate of eternity in Hell. Concept albums are always difficult to write, but the fact that this is only the bands second effort makes this feat even more impressive.

The improvement in both the vocals and drumming is a welcome addition for the band. Although, John Greely is not a fantastic lead singer, he does give a solid performance on this record.

John Greely is a solid vocalist, but he does not quite match the unique music on display. The vocals are still the only thing keeping Iced Earth from being great in all musical aspects. John Greely is solid, but not great.

This epic opener begins with orchestration and big sounding guitar riffs. Then, the song completely changes its tone to a soft acoustic section with melodic vocals. The best thing about this track is the amount of heaviness and speed occurs throughout the rest of the track. Greely's vocals are very haunting and a huge improvement over his predecessor.

I love this song thanks to its extremely catchy chorus and speed throughout the entire song. This is one of the more straightforward songs on the record, but it just happens to be one of the best. The lyrics are memorable and the "gallop" style riffing is very enjoyable. The guitar solos are also well executed.

Track 3: The Path I Choose

I love the speed and aggression that is on display during this song.The lead vocals are really memorable because of Greely's high pitched yell of the lyric "this is that path that I choose" during the chorus. I love the rhythm guitar work because of how instantly memorable most of the riffs are. The guitar solos are also fantastic.

This epic 9-minute closer is definitely a masterpiece and is among the band's best tracks. I love Greely's haunting high pitched vocals on this track when he is singing from the evil figure's perspective. The track does a great job of changing between the softer acoustic moments with the faster thrash oriented moments during the song. The vocals during the chorus are actually quite impressive and are probably Greely's best on the entire album. This track is definitely a haunting conclusion that ends this album on an extremely high note.

Night of the Stormrider shows major improvement for Iced Earth. The album is full of fantastic songwriting that is creative, catchy, and memorable. The improvement in the lead vocals make this record far more appealing than the band's debut album. Iced Earth's sophomore effort is an excellent release that is very enjoyable from start to finish.