Did this movie predict the global pandemic we're all currently experiencing? 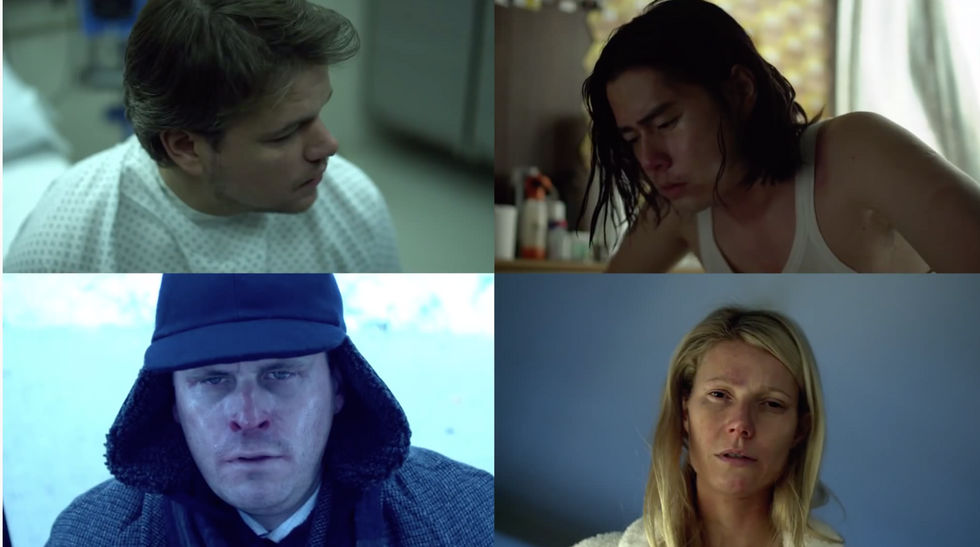 When I saw my next assignment was to watch "Contagion" for my film class, I knew

"Contagion," directed by Steven Soderbergh, was made back in 2011 before anyone ever knew that a massive pandemic would hit the globe in 2020.

When the movie begins, the audience is only able to see a black screen, but they can hear the sound of a woman coughing. It then shows a woman, named Beth, on-screen drinking and eating peanuts at an airport bar where she talks to someone on the phone. When she hangs up to leave for her flight, the camera makes sure to focus on every single item she comes in contact with, which they refer to as fomites in the film. Many of those items also come in contact with the bartender, like the glass she drinks out of as well as her credit card. It is an ominous beginning to a massively widespread virus that quickly kills its victims. The film continues to show two others across the globe who had been in contact with Beth and how they also became sick. All three of these characters die within two days of having the disease that Beth unintentionally spread.

As the virus continues to spread like wildfire across various countries, the characters panic about the unknown and the CDC scrambles to find a solution to the growing danger that threatens everyone. One scene shows the doctor assigned to lead the CDC in their decision making, Dr. Erin Mears, in a board room explaining the various things they need to learn about the virus-like how many people an individual can spread it to if it lasts on surfaces, and who is the most vulnerable population. When discussing what to do, she tells her supervisor that she plans to "isolate the infected and quarantine the exposed," which sounds all too familiar. They also discuss how people need to stop touching their faces, wash their hands, and social distance. In later scenes, citizens panic and begin to raid stores for food and other items and many are seen wearing masks. Two of the characters try to escape from their home to go into another state and are turned down by the military guarding the state boarders who tell the characters to go home and quarantine. Sound familiar? As I was watching I couldn't help but like I was watching a movie about 2020. It was quite eye-opening to me to watch the characters go through nearly the exact same thing that we all have lived through this year.

However, now it's the reality that we all live with today. Yes, the movie is definitely more dramatic and the virus in the movie is far more violent in its speed and the way that it causes its victims to seize, but in all honestly the movie is not all that far-fetched. Maybe the stores were not violently raided by citizens with weapons in real life, but the stores were running unusually low on stock and had to limit certain products per customer due to shortages. Military might not have guarded the borders of the states, but certain states did create restrictions about crossing borders. One of my relatives had to fly home at the beginning of the pandemic and she told me that at her connecting flight in Texas, she had to take her temperature and report her whereabouts to police at the airport. She told me it felt very scary and apocalyptic, almost like the world was shutting down. In one scene, Matt Damon's character, Beth's husband, even organizes an at-home prom for his teenage daughter and her boyfriend. At the end of the movie, the filmmakers show us how the virus began and how it reached Beth. A bat had flown into a meat market where it came in contact with a pig. That pig was then being prepared by a chef in the kitchen. This chef then met Beth and shook her hand after handling the pig, thus spreading the virus to Beth. Once again, this sounds eerily familiar.

The craziest and most unrealistic part of the movie by far was how quickly the doctors discovered a vaccine for the virus.

Somehow, it only took the scientists and doctors four months to find a vaccine for the virus in "Contagion." They were also able to start using it almost immediately and people were able to start going back to the normal way of living way too soon. Can you imagine if it had only taken four months to find a vaccine for COVID-19? That is unheard of in real life. Here we are at nine months and we are just now on the brink of having a vaccine, but it is still not fully approved or available for widespread use. Overall, this movie shook me to the core because of all of the shocking similarities it displayed, besides the vaccine part. I kind of re-opened my eyes to the insanity of everything that we have all endured this year. I think it is important that we all hang onto hope that a vaccine will be found soon, even if it is not as soon as the vaccine was found in the movie. It also reminded me of how important it is for us to give ourselves a break mentally because we have all been through a lot of trauma this year. Maybe it's strange to say, but "Contagion" made me think about how much we have all experienced this year and that we all deserve to take a breath after taking on so much emotional trauma.