Dear Survivor, I'm Sorry I Didn't Know How To Help You

Dear Survivor, I'm Sorry I Didn't Know How To Help You

Years ago when my sister was sexually assaulted, I was not the ally that I am now. And for that, I am so sorry. 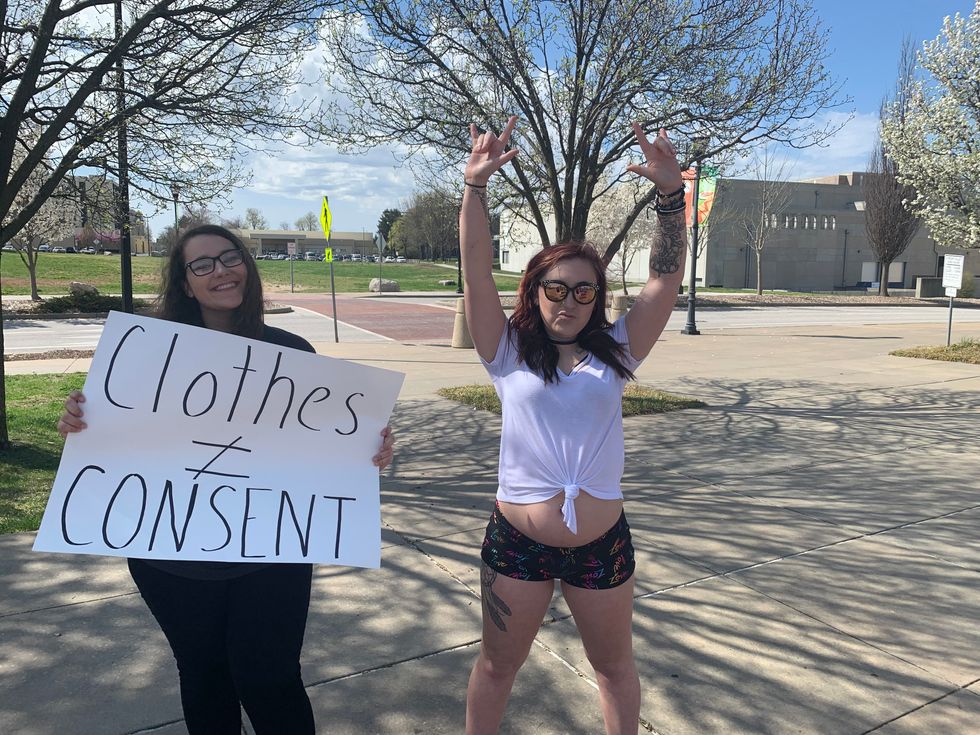 A few weekends ago, I had the privilege of standing alongside seventy-five other people in my community for the sake of raising awareness about sexual assault. But this march was different because I came for a personal purpose. Me Too Springfield, a sexual assault awareness organization, hosted this event and had a display titled "What were you wearing".

This display was incredibly powerful for me because it was the first time since she was assaulted that my sister felt like she had a voice. I cannot tell you how proud it made me to look at the strongest woman in my life and slowly see her years' old pain begin to ebb away.

Looking back now, as an active ally to sexual assault victims, I am very ashamed of how my family and community treated my sister after her assault. Despite what everyone else said, the signs of a very real sexual assault were there but it was just easier to bury it rather than address the very real pain that my sister had suffered.

After her assault, nobody believed her. My sister was called a liar and a whore for "seducing" a twenty-one-year-old because she had shorts on. It was summer time. We were at the river.

Of course, she would have shorts on, after all, so did I and the other fourteen-year-old who was there. And yet she was the problem? Her shorts were too much of a temptation because she developed earlier than some other girls?

It's incredibly unfair to body shame a teenager for literally just existing. She was called a slut because she had been drinking. Wow, a couple of Smirnoff Black Ices and you're just begging to be raped apparently.

And yet somehow nobody pointed out the fact that he was a twenty-one-year-old who willingly bought a 14-year-old alcohol while we were camping. Not to mention that HE made the choice to get drunk when he was supposed to be the adult of the trip. She was called "not really raped" because she could have gotten up and left the tent.

And yet nobody called out him for getting drunk and choosing to sleep in a tent with three teenage girls over the tent with his brother in it. The bottom line is that she was not believed because she was young, vulnerable, and intoxicated among other things.

And the heartbreaking fact of the matter is that all of these things are the reason why she was targeted in the first place. Rather than believe my sister, people chose to invalidate her feelings and did absolutely nothing to help her heal. I wasn't there for my sister when her assault happened. And for that, I am eternally sorry.

But rather than letting my regret consume me, I'm committing to always making myself an ally. I want it to be crystal clear to everyone around me that I will believe them no matter what and I will never shame them for something that was not their fault. Rape does not happen because of clothing, alcohol, or any other excuse that society or abusers try to use.

Rape and sexual assault exist because of the people who choose to commit these acts. Victim blaming and slut-shaming has haunted sexual assault survivors for too long. In the wake of the incredible #MeToo movement, I am proud to stand as an ally in my community and I hope to amplify the voices of the survivors around me.

If you or anyone you know has been sexually assaulted, I hope you know that you are seen, believed, and validated in all of the pain that you have suffered. It doesn't matter if your assault happened last weekend at a party or twenty years ago in your childhood home. It is never too late to seek help.

My sister and I were featured in The Standard about the Power Walk and I'd love it if you would check it out: Shining a light: PowerWalk held to advocate for sexual assault survivors