How Betsy DeVos Ruined My Job
Odyssey
CurrentlySwoonLifestyleHealth & WellnessStudent LifeContent InspirationEntertainmentPolitics and ActivismSportsAdulting
About usAdvertiseTermsPrivacyDMCAContact us
® 2023 ODYSSEY
Welcome back
Sign in to comment to your favorite stories, participate in your community and interact with your friends
or
LOG IN WITH FACEBOOK
No account? Create one
Start writing a post
Student Life

How Betsy DeVos Ruined My Job

Will I still have a job in Trump's America? 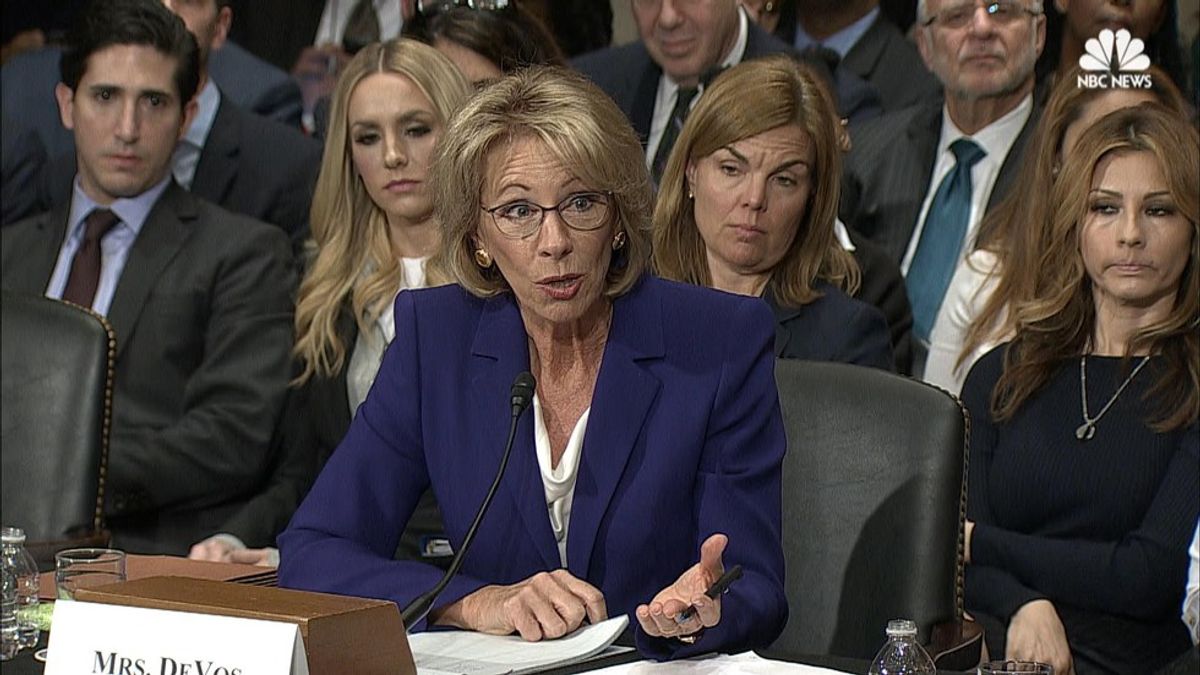 The secretary of education is one of the least powerful positions in the federal cabinet: 16th in succession to the president and responsible for only 3% of the federal budget. That’s what makes Betsy DeVos’s case so interesting. Betsy DeVos, our nation’s new secretary of education is the most vocally opposed nominee of President Trump, with opposition coming from progressive groups, teachers’ unions and the Democratic Party itself, as well as from non-partisan local parents’ and teachers’ organizations. Oregon high school students walked out of class in opposition to DeVos. Senators have been bombarded with calls and some have had their offices picketed by protesters demanding they cast their vote against DeVos.

However, on February 8th, DeVos was confirmed as secretary of education in a close and tense senate race, with Vice President Mike Pence casting the tie-breaking vote. This vote is stunning and frightening for anyone who has ever benefited from our public schools (something Betsy DeVos has not experienced). Let me explain why, and why this affects me directly.

First off, DeVos has very little knowledge of education laws such as IDEA (for students with disabilities), Title IX (gender discrimination), and FERPA (educational privacy). She has had no experience with the public school system that she is now tasked with managing. She has only attended private schools and universities for her entire academic career, and unlike approximately 90% of children in the US, her children attended private schools as well. DeVos has little to no knowledge of how public school function, what daily routines look like, or what challenges the teachers face. In her drama-laced confirmation hearing, she demonstrated the inability to distinguish between growth and proficiency, something anyone with an interest in education should be aware of and have a position on.

The theory behind school choice is that as there are more schools, there are more options for parents to send their children for an education. School choice proponents also argue that charter schools are able to help their students perform better because they can use more experimental methods to teach their students since they are free of bureaucratic red tape and restrictive legislation. However, that simply has not proven to be true. Michigan is the “proving ground” for school choice systems because of its few restrictions on charter schools and education in general. Looking at their education system, though, private and public included, they are not performing at even the average level, and instead are in the top 10 poorest-performing states.

Charter schools and voucher programs are also highly controversial due to their financial nature. Vouchers allow tax dollars to be provided to lower-income families as a stipend to help them send their children to private, sometimes religiously-managed, schools. However, these stipends are not nearly enough to cover the cost of a private school education, and many families are then forced to take out loans with high interest rates from private companies. Nearly 80% of Michigan’s charter schools are run by for-profit corporations, which is the highest rate in the country. This privatization of education, the way these investors look at it as a “cash cow,” is frightening. This is an affront to the constitutionally-provided rights of every child in the United States.

No why does this affect me? I’m an elementary and special education major. As I’ve gotten experience in the local schools, I’ve really felt the desire to teach in our nation’s public education system. However, we now have a secretary of education that believes in privatizing education, is hell bent on taking funding from public schools and putting it into the hands of private and religious schools, and whose “crowning achievement” is a failing school system of charter and public schools. In Detroit, as the public school system fought to survive, teachers were let go, staff benefits were cut, and entire schools were closed. So many teachers lost their jobs as a result of DeVos’s push for the privatization of education, and if her performance in Detroit is any indicator of her plans for the next four years, I’m in for a long tough ride.

Out of Options: School choice and Detroit’s public education.

Betsy DeVos and Education in Michigan

Betsy DeVos and the State of Detroit’s Schools

Beware Betsy DeVos and her Vouchers

Betsy DeVos as Secretary of Education