History Repeats Itself: The Parallels Between Donald Trump And Warren G. Harding

History Repeats Itself: The Parallels Between Donald Trump And Warren G. Harding

Believe it or not, there was a Presidential Cabinet far more corrupt and incompetent than Trump's could ever hope to be. 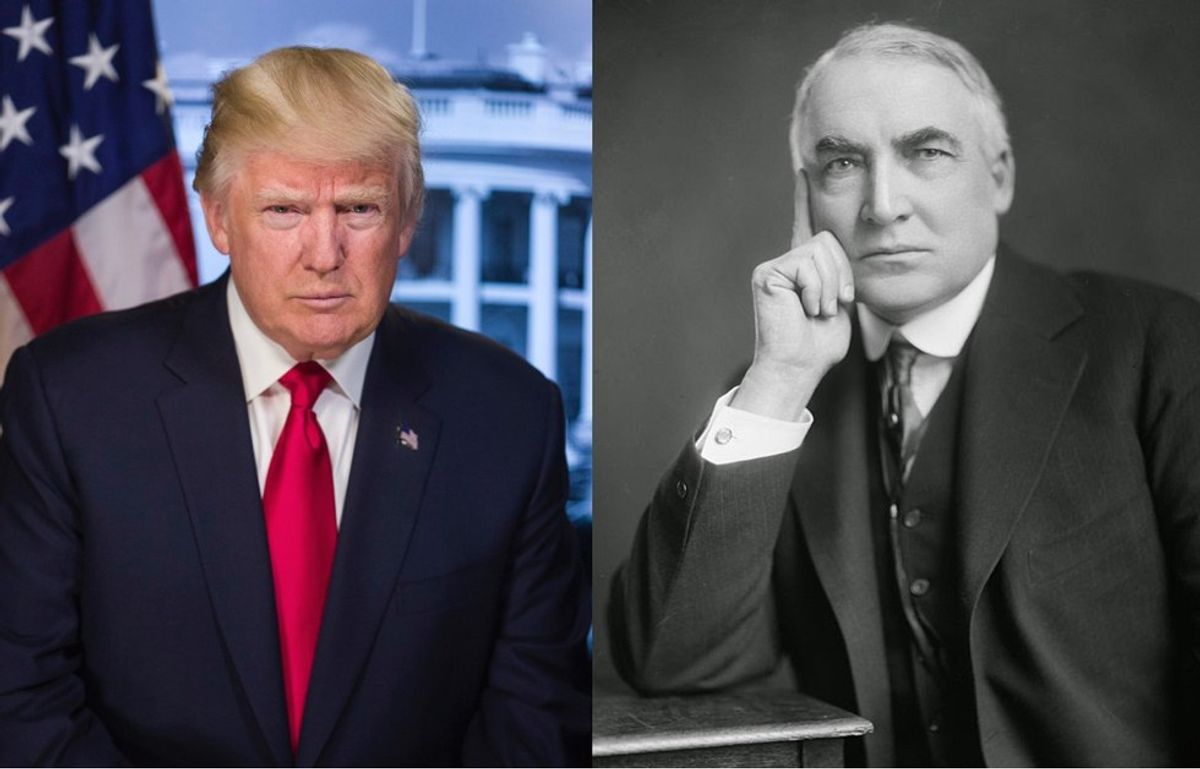 f you've been paying any attention to the news, you likely know that the country is in turmoil. Between repeated displays of incompetence/conflicts of interest in Trump's Cabinet picks, Kellyanne Conway's insistence that the Bowling Green Massacre actually kinda-sorta happened, the President's extreme executive orders, and WHPS Sean Spicer's earnest, yet wildly ineffective, attempts at damage control, it feels like we're living in completely uncharted territory -- a Twilight Zone, if you will.

What if I told you, however, that this sort of bizarreness has some precedence in the Oval Office? That given the sordid history of one particular President, we have plenty reason to be worried about what the next four years will bring?

I'm, of course, talking about this guy:

That's Warren G. Harding (1865-1923), the 29th President of the United States. You probably haven't heard of him. If it weren't for the fact that I spent hours pouring over Judith St. George's So You Want to Be President as a kid to the point of memorization, I probably wouldn't have either. Here's how George describes him:

Ignoring the bit about being handsome, that description sounds mighty familiar...but I'm getting ahead of myself.

If you compare the trajectories between Harding and Trump from the very beginning, parallels begin to emerge. Much like Trump, Harding won over voters with an appeal to normalcy in the wake of a politically charged war and advances in civil rights for minorities, all the while deflecting accusations from critics deriding him as "the least qualified candidate since James Buchanan." Ultimately, Harding's efforts paid off with an easy landslide -- 60% of the popular vote -- and he was inaugurated on January 20, 1921. (This is inverse to Trump, who lost the popular vote and whose approval ratings are steadily declining as we speak...but that's an analysis for another day.)


Then there are the policy parallels...or lack thereof, seeing as how Harding and Trump were of entirely different mindsets. However, there is one instance Harding and Trump were in sync. In an era where anti-Semitism and fears of progressive socialism/communism ran rampant due to recent global conflicts (hmmm...), Harding's Congress passed the Per Centum Act of 1921 as a temporary means of halting immigration. In essence, the act restricted the number of immigrants from any given country to 3% of the total population of that given ethnic group already in the US (as of the 1910 census).

If that sounds needlessly complicated, that was likely the point: the way the law was phrased strategically targeted "undesirables" like East European Jews and Italians while allowing "desirable" groups like the Irish and Germans to enter unscathed.

Somehow, I feel like I've seen something similar before...

There's also, of course, the matter of the Ohio Gang. Think of them as the Roaring '20s equivalent of Trump's cabinet: close allies/friends/relatives of the President with conflicting interests and/or no political experience who tended to place personal interests above the interests of the country. Collectively, they wreaked havoc with such transgressions as [deep breath]:

º Taking part in bribery, influence peddling, and lobbying while in office

º A whole host of general incompetence and laxness in dealing with pressing matters, resulting in the effectiveness of several departments being compromised completely

The parallels between what has happened and what many critics fear will happen are uncanny.

What I'm trying to get at here is that the wackiness in the White House right now isn't entirely unprecedented, and has the potential to get far, far worse. Harding was rather naive, easily manipulated, and mostly oblivious to the chaos in his Cabinet. Trump, on the other hand, seems to fairly complicit in how his cabinet is handling things, if not outright encouraging them. It's this key difference that will ultimately distinguish what happens in the Trump administration and what happened in Harding's, and the reason why I can only be so hopeful that things will resolve themselves neatly once he leaves office.

The Harding administration eroded trust in the government and laid the groundwork for the inevitable economic collapse at the end of the decade. One can only hope that Trump and co. will realize the grave responsibility they now possess and not let history repeat itself. Perhaps, even, Trump will demonstrate some humility and take a page out of Harding's playbook. As the latter himself so eloquently reflected, "I was not fit to be president, and never should have been."