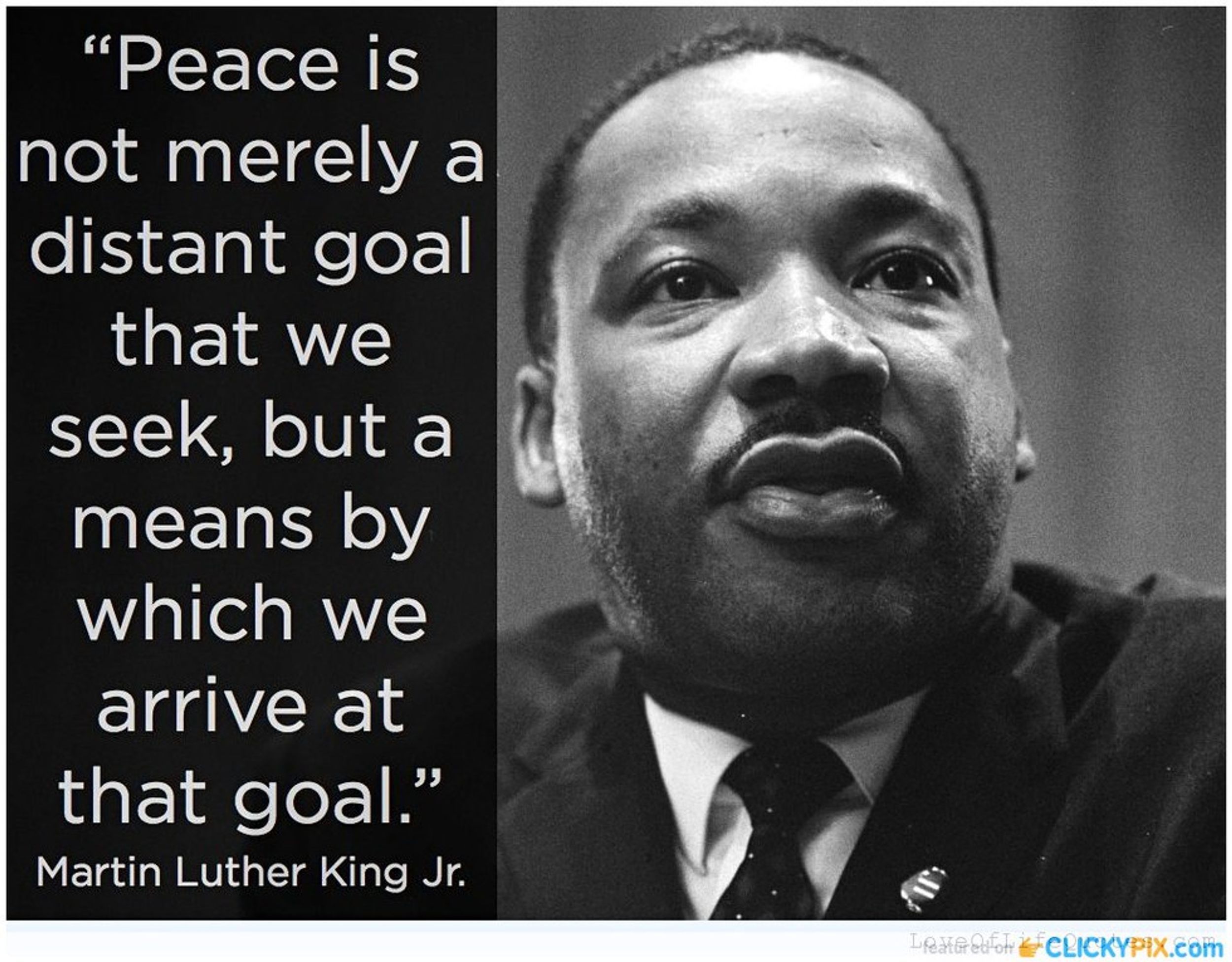 “Every man must decide whether he will walk in the light of creative altruism or the darkness of destructive selfishness. This is the judgement of life's most persistent and urgent question, what are you doing for others?”

Martin Luther King Jr was born in Atlanta, Georgia; January 15, 1929. He was the second born to two other siblings. He had an older sister named Christine and a younger brother named Arthur Daniel. At first he was christened Michael but, later they decided to just give him his father's name. Martin Luther King Sr was very strict and stern, he did not spare the rod. As a child, Martin Luther King Jr enjoyed to read books, a lot. He read all of the books in his mother and father’s personal library, so as to ascertain more novels he got a job delivering papers in order to pay for his own. The fact that he read frequently added to why he was so smart, he actually got to go into kindergarten early because of his rising IQ. He wasn’t allowed to be in school earlier than the designated year, but the school only found out when they celebrated his birthday and he corrected them. He returned to kindergarten two years later. Because in all the books and newspapers he read, he had heard a lot about segregation at an early age. So his mother, Alberta Williams, taught him the rest of it. Martin Luther King Jr. began to hate white people because of all the things he read in the news, learned at school, and seen in public. It was devastating to him, but he’d always had his grandma- Mama Williams- to make his day brighter. It was in 1941 that she unexpectedly died, and Martin, so severely distraught, threw himself off the second story building in his house. Actually, Martin jumped out this window a lot, whenever he felt like something was his fault, even if it obviously wasn’t. Luckily, he’d never gotten severely injured during these extreme measures/punishments. Martin Luther King Sr. had been raised in a very Christian house, he treasured the Bible above all his other books or worldly items. He was a very esteemed pastor at his church, and he wanted his son to follow in his footsteps. It didn’t seem to happen in his younger years. During his high school years, Martin wasn’t the type of person who’d want to punch out a problem than speak, he also cared much about his appearance. Once, while on a field trip with his teacher, he sat in the colored section. At a stop with a particularly large crowd, he was told to give up his seat so that the white men and women could sit. Martin had refused. His teacher implored him to just relent, and finally he did, but that incident had only made him resent the white man even further. At the age of fifteen, he was already enrolled at the Morehouse College. He went to pursue a career in sociology, law. While in college he would meet up with interracial white people. Ever since he began those meetings, it made him realize that not everyone held racism in their fibers. He got a doctoral work in theology at Boston University so that he could be a preacher.

Most of Mr. King’s speeches were not prepared for and he would just wing it. This specific trait helped him a lot in the future while he was an adult. Mr. King met a woman named Coretta Scott who was studying to become a professional singer in Boston. It was love at first sight. They ended up getting married on June 18th, 1953. Mr. King accepted his first pastorship at the Dexter Avenue Baptist Church in Montgomery Alabama. He was an excellent pastor. In 1955, his first born child Yolanda was born. Only a year after that, he received his PH.D from Boston University. During that time, Mr. King decided to boycott the buses, which was actually strongly influenced by Mrs. Rosa Parks. They boycotted, and the buses had lost a lot of money during this time. The boycotters instead took carpools, so the busing system had begrudgingly succumbed to the boycotters demands. In 1957, his second child had come into life. He was gifted with the name Martin Luther King III.

In Harlem during 1958, there was an attempt to murder Dr. King. He was at Blumstein’s Department store, signing books for adoring fans when at 3:30 woman came over asking “Are you Dr. King?” He nodded in response, and the woman drew out a knife and plunged it down deep into his chest. The wound was turning more and more fatal every second he spent getting rushed to the hospital. The woman who had stabbed him had been deemed as mentally ill, luckily, though she was armed with both a knife and a gun, she’d chosen to use the knife. Dr. King miraculously made a full recovery. After that incident, Mr. King moved to Atlanta with every intention of cooling everything down, but he was then involved in sit-ins. Sit-ins are when protesters would sit and take up space and refuse to move or (in the case of restaurants) order until they were met with their standards. That was the beginning of when he started protesting once again. In 1961, Mr. King began to support a group called the ‘Freedom Riders’ in Montgomery, Alabama. Freedom Riders would ride integrated busses into the segregated southern United States. It was also in 1961 that Mr. King failed the Albany, Georgia campaign. His son Dexter and daughter Bernice had been born in 1962 and 63, and that was when he began to plan the Birmingham campaign and Children’s Crusade. The Children’s Crusade was named after a march of school students from May 2nd to 5th. The Birmingham Campaign was named that because it was organized to show how hard black citizens were trying to get integrated into Birmingham, Alabama. Finally, the well awaited moment. In 1963 Dr. Martin Luther King Jr. gave his infamous "I Have A Dream" speech at the march on Washington; getting him named the Time’s “Man Of The Year”. During his planned four minute speech, a woman had stood up and called out for him to tell the crowd of his dream, he hadn’t even wanted to speak at all that day. There had been an empty final slot for a speaker, but everyone wanted to go first because they feared the press would be long gone by the end. His speech took up to sixteen minutes, where he described his dream of a perfect world, and the press remained for every last word of his spoken. In 1964, he participated in a St. Augustine Florida Campaign, this march was just like any other march towards freedom. In 1964, he had also accepted the Nobel Prize of Peace. One of his greatest and most memorable accomplishments though was when he convinced president Lyndon B. Johnson to sign the Civil Rights Act of 1964. This act enabled a law that outlawed all discrimination based on color, sex, religion, race, or national origin. In 1965, the Selma to Montgomery march took place, most infamously known as “Bloody Sunday”. There were three marches to this act. The first march on March 7th-”Bloody Sunday”-600 marchers protested the death of Jimmy Lee Jackson. While they protested they were attacked by state and local police with billy clubs and tear gas. The second march was on March 9th. Police and protesters stood face to face, but when the police stepped aside to ‘let them pass’, Mr. King led them all back to the church. The final march took place on March 16th; the marchers were protected by 2,000 soldiers of the U.S. Army, 1,900 members of the Alabama National Guard under Federal command, and many FBI agents and Federal Marshals; the marchers made an average of 10 miles. They arrived in Montgomery on March 24th and the Alabama state capitol on March 25th. Mr. King participated in Operation Breadbasket after that in 1966. This operation was made to make economic conditions better for black communities. In 1967, he first denounced the Vietnam War, and Martin Luther King Jr. began to plan for the poor people's march on Washington D.C. During the fateful year of 1968, on April 4th, Martin Luther King Jr. was shot down by gunner James Earl Ray in his prime age of 38. Many people mourned the loss of this incredible man, and in 1986 his birthday was made to be celebrated as a national holiday.