12 Ways To Survive "HamilTony's" This Year

Hamilton is everywhere over the Tony's, here's how to deal with it and what to expect. 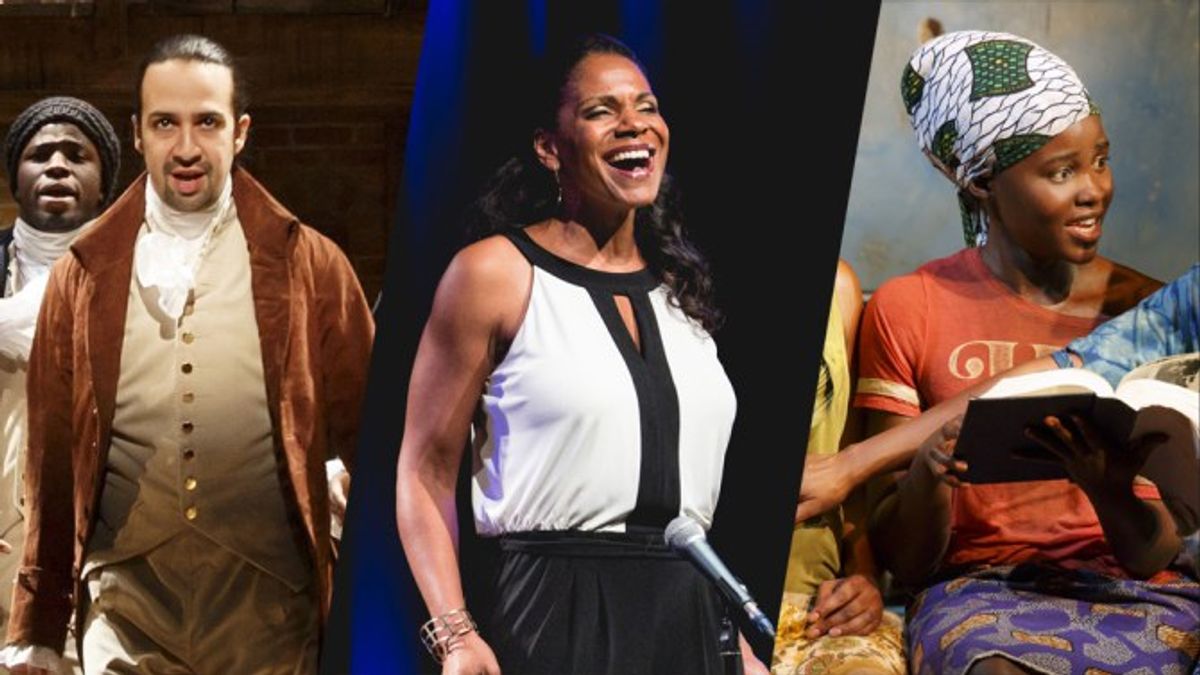 “We call it the HamilTonys, and we know this is as far as we can go, but it’s great to have got this far,” -Andrew Lloyd Webber, legendary composer of "Phantom of the Opera" and "Cats"

Follow this GIF when breathing in and out before going farther because this is going to be a doozy.

2. Just accept the fact that this was a bad year to be good.

This year was a big breakout with a ton of shows that are amazing: "On Your Feet!" "Bright Star," "Color Purple," "School of Rock-The Musical," "Spring Awakening," and, of course, the groundbreaking "Hamilton." With that being said, many great musicals were overlooked for another, especially when a lot of them excelled in the same category, ex. "Best Score." As a result, you couldn't just be good, you had to be great in order to excel.

3. Burr versus Hamilton in the Best Performance By An Actor In A Leading Role In A Musical.

Sure, there are three other actors up for this award, but all of the eyes are on Aaron Burr and Alexander Hamilton actors, Leslie Odom and Lin-Manuel Miranda, respectively. No one is focusing on the other actors, from "School of Rock," "She Loves Me," and "Fiddler on the Roof," so most are focusing on the main runners up. However, Miranda is not expected to win, as his nominations for Best Score and other technical awards for "Hamilton" are expected to overshadow his seemingly meager nomination for Best Actor.

This year, the Oscars got some bad press when there were no nominations for people of color, that is a direct contrast to the Tony's nominations. 16 out of 40 of the major acting nominations went to people of color. As a result, expect a lot of jokes about the two.

This year's host, James Corden, is the new host of "The Late Late Show." Anyone who has seen the show can tell you that Carpool Karaoke is a major staple of his show, most memorably doing this spot with Adele, Elton John, and One Direction. As a result, I would expect at least a joke, if not an attempt to start a karaoke session with some of the biggest names in the industry.

6. Don't expect a lot of promotion for the forerunner "Hamilton."

One of the major things about the Tony's is that it is a major promotion for the plays and musicals on Broadway. It allows everyone across America to learn about the show and give them reason to travel to New York City and spend money on their show. "Hamilton" is already known worldwide because of its unique take on history, diverse cast, and major awards like the "Pulitzer" under its belt. They have no reason to shove "Hamilton" down our throats other than what is already going to be on the show naturally, like their performance and nominations. As a matter of fact,"Hamilton" will be cutting into the other numbers as well, like the box office number that is taken into account after the Tony awards (to see how the promotion affected it).

With a weekly gross of over $1 million dollars a week, there is not much to top, especially as they are sold out every week and you have to wait at least a month or two before you can get tickets and see the show. As a result, producers are hoping to bring in some of that money into other shows such as "Bright Star" and "School of Rock" through the Tony's promotional system, so that's why there may not be as much "Hamilton" on media as people would like.

7. The "Meryl Streep" of the stage will throw some wicked shade on stage.

Audra McDonald is an icon on the stage with six Tony wins under her belt so far. As a result, it came as a great shock when the nominations came out and McDonald was nowhere to be seen. While some might see this as a major snub, others might see it as a chance for others to shine in the spotlight. Either way, be sure to expect this veteran of the stage to throw some major shade, either at her snub or at the Oscars for being so white.

Remember how I said earlier the Tony's are a major promotional tool for shows? Well, what do you do when you're hanging on by a thread in the box office and you only have one nomination in the biggest promotional event of the year? You pack up shop. As a matter of fact, "Disaster!" announced they are packing up on May 8th, two months before it's original end date July 3, because there are so few nominations and little to help them stay afloat and help account for the loss of money. They had hoped to hold on until after the Tony's, but with only one small acting nomination, they have no reason to hold anymore. Looks like they stayed true to the name after all.

9. Expect "Hamilton" to come close to breaking "The Producers'" record.

"The Producers" broke records in 2001 when it won 12 of its awards out of the 15 nominations. "Hamilton" is nominated for 16 and is predicted to come close, but not quite break the record set by "Producers." Seeing as at least seven of "Hamilton's" nominations are acting categories and overlap each other, it is only possible to win four out of those seven nominations alone, not to mention the fact that it will be nearly impossible for them to sweep their other categories, as well it is apparent that "Hamilton" will put up a good fight, but not win in the end.

Thanks to musicals like "Hamilton" and "The Color Purple," for the first time in the Tony's history all four acting categories for musicals could be filled by people of color. Take that, Academy Awards!

11. Don't expect much mention of the plays outside of their nomination categories and the celebrities that star in them.

Because besides that, no one really cares. People come and expect the musicals when they come to the Tony's and unless their favorite celebrity is up for a nomination with the play, no one bothers to learn who is in what category. It's kind of like musicals at the Oscars.

12. Spectacular performances from all no matter their nomination total.

Because it's their night to shine and that's what we're here for! Work!