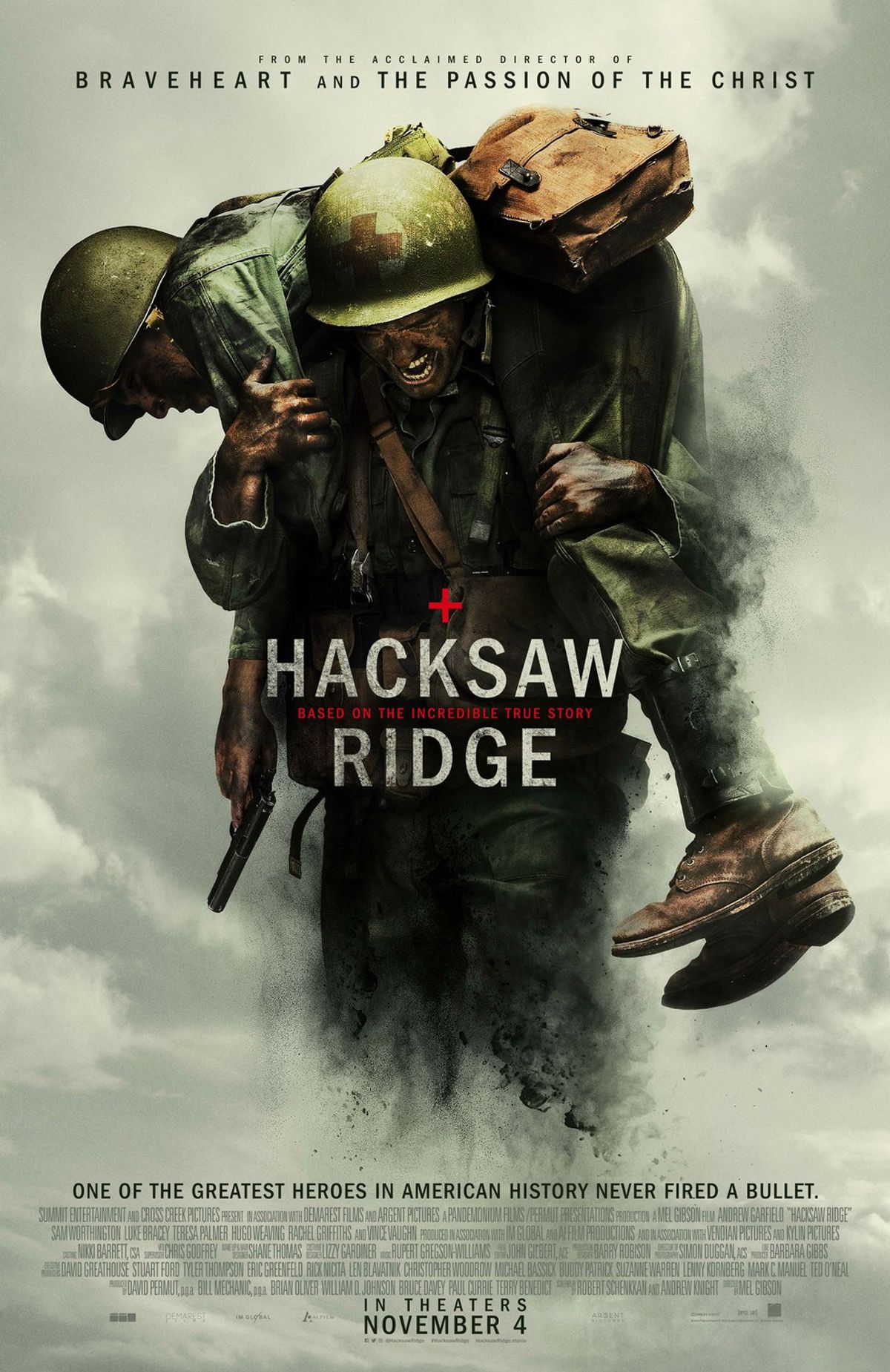 It certainly is good to have Mel Gibson back in the director’s chair. After a decade of being absent in it (since 2006’s "Apocalypto"), Gibson returns to give a profound and skillfully well-made WWII picture about peace. Granted, it isn’t perfect but the overall result is an insightful experience that deserves to be seen on the big screen.

The story centers on the true story of Desmond T. Doss (Andrew Garfield), a pacifist medic who became the only conscientious objector to win the Medal of Honor during World War II. His pacifist morals stem from crucial moments in his life where violence is at heart, including growing up with an abusive and alcoholic father (Hugo Weaving), and a traumatic childhood experience where play fighting with his brother, Hal (Nathaniel Buzolic) went horribly wrong. Years later, Doss still lives with his family and works in his town’s church. A gruesome accident he witnesses leads to him falling in love with a nurse he meets at a hospital (a remarkable Teresa Palmer), who later falls for Desmond as well. Hal announces to his family he recently enlisted in the Army to fight overseas, drawing shocked reactions from his parents and Desmond. This, in particular, affects the alcoholic father, Tom Doss, a WWI veteran still traumatized from his time of service. Despite Tom’s demands to the boys about not enlisting, they both do so.

Basic training for Desmond can be compared to Dante’s idea of the nine circles of Hell, and our hero goes through them all. Most of the other guys taunt and bully Desmond (so far as to beating him up to a pulp one night, similar to an early scene in Full Metal Jacket). His tough commanding officer, Sgt. Howell (a miscast but effective Vince Vaughn), makes things worse by making Desmond go through painstaking labor and having the other recruits turn against him. The men confuse our hero’s morals of non-violence and care for one another with cowardice (Desmond refuses to hold a rifle). As the story moves along, we learn how he convinces the Army in granting his request of serving without any weapons. He is clear in his mission: put his life in front for the safety and care of other soldiers fighting in battle.

Some may find the film up to this point a little sluggish (although I didn’t), but I suspect few will say the same for the film’s second half. I should be clear on this: the violence in these scenes are bloody, graphic, and relentlessly brutal. Taking children to this film would be sheer insanity. We are talking about Gibson here, the man who directed graphically bloody films such as Braveheart and The Passion of the Christ (the latter being frequently labeled as one of the most controversial films in cinematic history). Gibson may have taken his passion for filming violence to excessive levels (or at times thriving on it), but there are so many things to admire in this film to denounce the picture as a whole. For one thing, these scenes of carnage are the most horrifying and disturbing (I mean this as a compliment on how effective these scenes are) since the iconic opening from "Saving Private Ryan" and Gibson’s 1995 Oscar winner "Braveheart." This is by no means a negative criticism from my part, but just a way of getting my point across of how these scenes are highly effective and brilliant.

Everyone in the cast has moments to shine, and they all do themselves proud in their own performances. Garfield, a talented actor known for "The Social Network" and the "Spider-Man" reboot films, gives the best performance of his career to date. An Oscar nomination is on the horizon for this brilliant example of acting. Garfield makes us root and hope for the safety of his character, as he puts his life on the line for his fellow soldiers. And Weaving deserves praise as well, bringing raw emotion to a father battling inner demons brought forth from the horrors of war.

Of course, Gibson as well must receive much credit for creating an anti-war film without being too preachy (which is never an easy task). Aided by his cinematographer, Simon Duggan, Gibson has constructed a harrowing yet important film that shows the causes and effects of war through the perspective of a brave hero. What I loved is how Doss isn’t portrayed as a perfect saint sent from the Heavens above to protect young, bloodthirsty soldiers. Here is a character that goes through uncertainty and psychological turmoil, and yet shows he is human and flawed like anybody else. He sticks to his goals of helping others in peril, even if it means putting his own life in the face of imminent death. The film’s portrayal of the real war hero can be considered a moving achievement from the entire cast and crew. This is a motion picture event that is not to be missed.