Why Frat Ratios Are Completely Unacceptable

Frat ratios equate us to ticket-like commodities and thereby effectively objectify us. 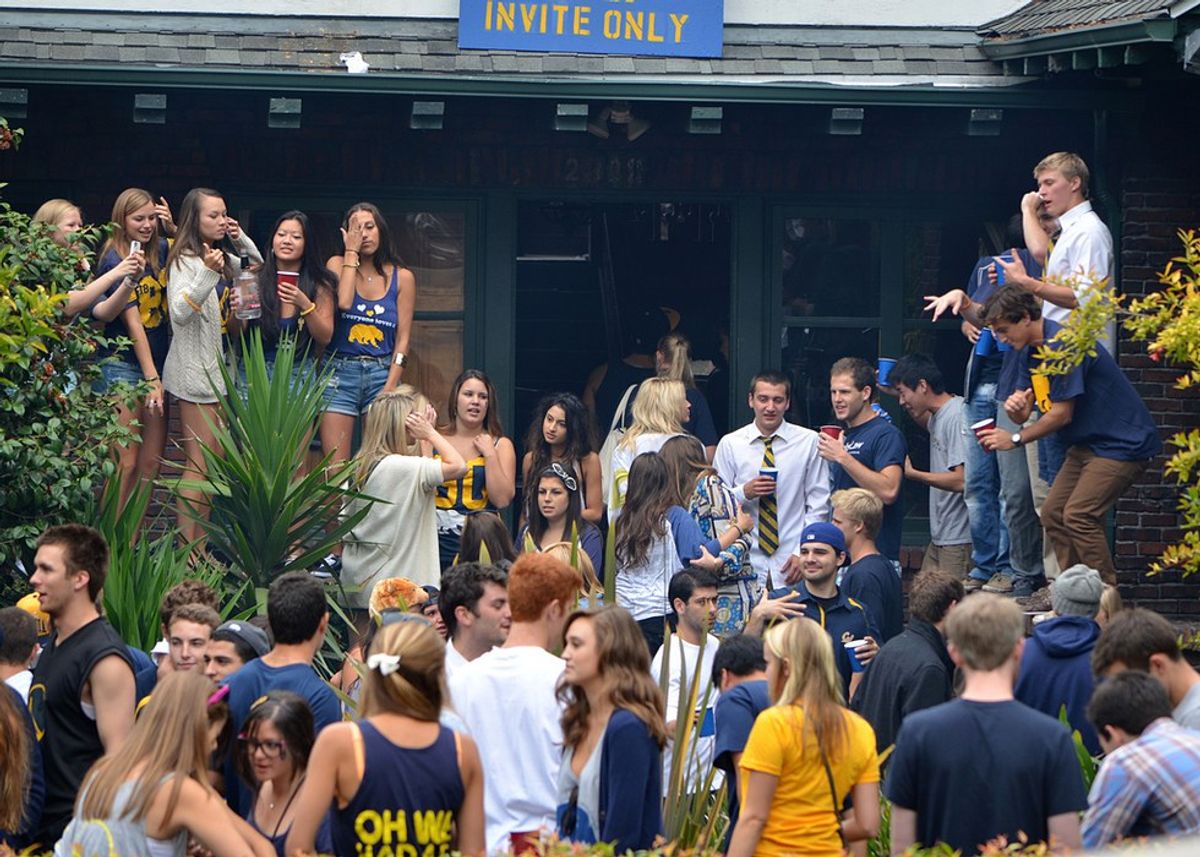 If you go to a large co-ed college or university with active fraternities, you're probably familiar with the "ratio" system.

If you're not, it's essentially that in order for guys to get into a frat party, they have to be with a certain ratio of girls. That ratio depends on the party, and can vary from 1:3 (one guy with three girls) to as many as 1:10 or even higher. As the night gets later and the party gets fuller, the required number usually goes up. The idea behind it is to ensure that the house isn't just full of a bunch of guys and no girls.

You might think I have nothing to complain about—after all, doesn't that system only suck for guys and make it much easier for girls?

First of all, no, because most girls don't want to choose between leaving their guy friends or getting into a party. That's what often happens when the frat brother at the front says only the girls in the group can come in because the ratio isn't big enough for the guys.

More importantly, it equates us to ticket-like commodities and thereby, effectively objectifies us.

On my second day of college, I was at an orientation week event and ran into some people who went to my high school. One of the guys, who I had never really spoken to before, came up to me with a completely serious face and asked if I was going out that night. He took down my number and said he'd text me the details in case I decided to go. He also made sure to tell me not to bring any of my guy friends since he was the one who asked me first, and to try to get other girls to come.

This guy, who I had never talked to throughout high school, spoke to me for the first time solely to try to use me in his , not even a casual "how's your first day been?" beforehand. The entire ordeal was like some sort of business deal, with me as the product being exchanged.

"The entire ordeal was like some sort of business deal, with me as the product being exchanged."

That's exactly why the ratio system is so problematic—it turns girls into first-come-first-serve ticketing booths, and perpetrates other guys treating us as such.

It also directly equates us with money: if a guy is short a girl or two, sometimes a frat brother lets him throw down $5 or $10 to make up for the missing "numbers."

Wow, thank you! I'm so glad to know my friends are equivalent to $5 a piece!

It's not even the exact number that's the issue, but rather just the idea that there can be any arbitrary price-equivalent put upon another human being.

There are also some brothers who will adjust the ratio depending on "how hot" the girls in the group are. "Yo they have mad hot girls, just let them in," is not a phrase uncommonly heard. So how does that work? Is one "mad hot" girl equivalent to two "average" ones? Three? If that's not objectification, I'm not sure what is.

It's dehumanizing and derogatory and unacceptable.

I understand that a frat party with a bunch of guys and far fewer girls might not be as fun for some people, but is an obscene ratio rule really necessary? Wouldn't just having a guy come with one, singular girl address the problem just as well, and be much less problematic?

I have yet to understand how this whole ratio system doesn't infuriate more people than it seems to—it's frankly gross how girls are turned into money- or ticket-equivalents. How is there not more discussion about this?

Frats who use the system should rethink how necessary it really is (hint: it's not) before objectifying those young women and simultaneously forcing other guys to as well, for the sake of complying with the system. Doing so perpetuates a misogynistic societal mindset, which is dangerous not just ideologically but also practically, considering that 1 in 4 college women are sexually assaulted with a significant portion of those assaults occurring at these parties.

And to anyone who might be rolling their eyes reading this, thinking that I'm just a naive freshman who will soon suck up the system and realize it's the norm by the time I'm a senior, you're wrong.

It won't suddenly become any less objectifying just because I'm three years older, and I certainly won't be any less appalled by young women having price tags around their necks valued at five bucks a pop—or any value, for that matter.

8 Things Children Of Firefighters Can All Relate To, Too Well