Every Single Gossip Girl Character Ranked Worst to Best
Odyssey
CurrentlySwoonLifestyleHealth & WellnessStudent LifeContent InspirationEntertainmentPolitics and ActivismSportsAdulting
About usAdvertiseTermsPrivacyDMCAContact us
® 2023 ODYSSEY
Welcome back
Sign in to comment to your favorite stories, participate in your community and interact with your friends
or
LOG IN WITH FACEBOOK
No account? Create one
Start writing a post
Entertainment 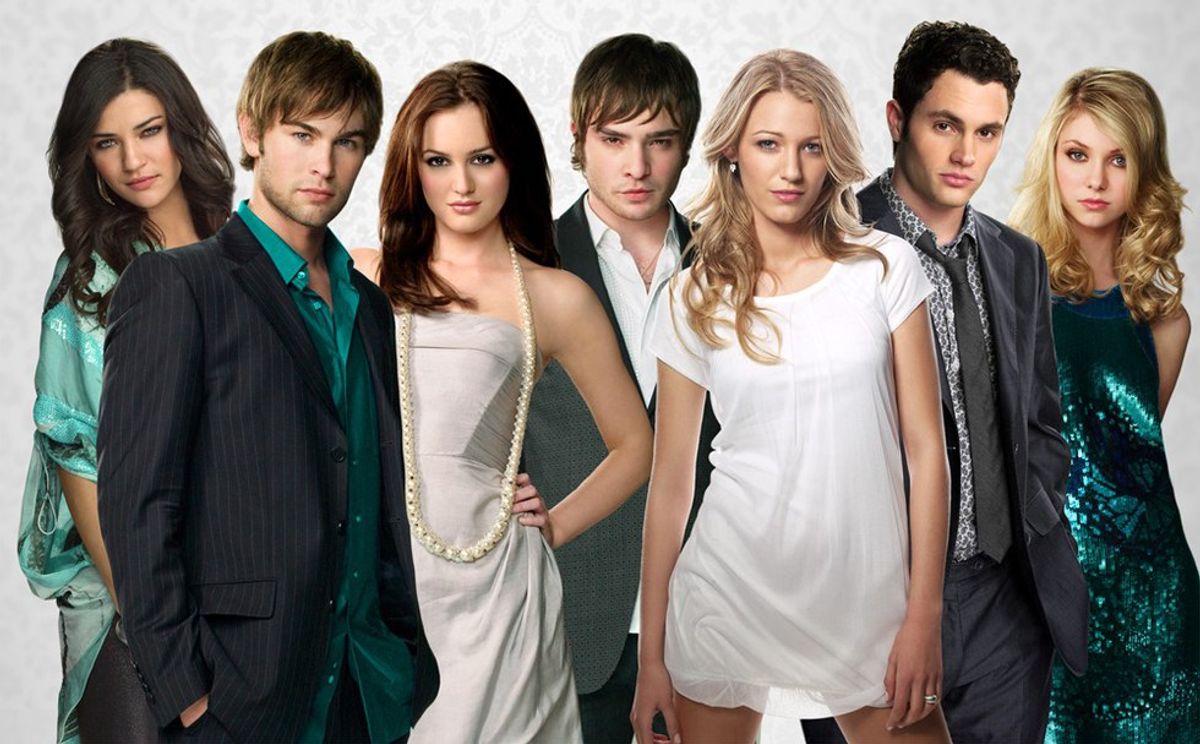 There's evil and then there's Bart Bass. This man does not have one nice bone in his body. He was was sleazy, a cheater, a felon, oh and paid to have people killed...including the attempt of his own son. All around just a true monster. No wonder Chuck is so messed up. Justice was more than served to Bart in the second to last episode.

Trash. That's the one word I think of when I think of Carol Rhodes. I mean, who has a baby with their own sister's husband and then hides the child, Lola, from her family throughout her own childhood? It's awfully ironic how she complains about the lifestyle of the Upper East Side when she hires someone her daughter acted with, Ivy, to pretend to be Lola in order to gain access to her trust fund. Then again, I wouldn't expect anything less from this woman.

Speaking of Ivy, she sure does not fall far from the top of the Most Hated list. She is one psychotic girl. Also, am I the only one who cringes when I hear her obnoxious voice?

Juliet is nothing but a vindictive, calculating psychopath...that's really about as nice of a way as I could put it. Sure, she's furious that the van der Woodsens put her brother in jail but drugging Serena and leaving her alone in a motel room to die was going a tad too far...especially considering Serena isn't even the one who signed the affidavit. She dedicated her life to ruining Serena's but I guess seeing a pinboard in her apartment of everyone's faces was a sign from the get go that she is demented. The worst part was, Serena just let her free after she figured out what all she did to her. If I were her, I would suggest she was locked up in a psych ward before she harms anyone else.

I was disappointed at how awful he turned out to be because he's so attractive. But between running off with Serena as a married man and leaving her alone in a crashed car to sending a car out to kill his own cousin, Nate, his looks have to be overlooked I suppose.

To sum in up in one sentence: he killed his own wife and got what he deserved in the end.

One word comes to mind when I think of him: shady.

Paid Chuck's therapist to share information about him and forced Blair into a dowry after they got married. You may be a prince but you will never be Chuck Bass, deal with it.

Just another no good con-artist, but he's from North Carolina so that's pretty cool.

Just another manipulative socialite who worked with Gabriel to con Serena's family for money.

Sorry but being Serena and Eric's father does not make up for giving out fake cancer and having a baby with his wife's sister.

Drug dealer who sold the drugs that almost got Serena killed. He was out of control and I think everyone was happy once his father finally figured out what he was really doing.

Let me start off by saying, I didn't like Vanessa from day one. I knew something wasn't right from the start when she climbed through Dan's window unannounced. She followed Dan around like a lost puppy dog and was always complaining about the lifestyle of the Upper East Side when last time I checked, she was always finding her way into these parties... and not to mention, slept with Dan, Nate, and Chuck all at one point. How about that for a contradiction.

I must say, I was rather disappointed that she turned out to be the little brat that she was. She was so sweet at the beginning but turned into quite the chaos. Sorry little J, but no matter how hard you try you will never be able to compete with Queen B.

Her dresses were way too tight for work and her strong accent gave me a headache after a while. Oh, and let's not forget she ran a brothel.

Oh Georgia. From crazy, to finding Jesus, to...well back to crazy. She is so messed up that after a while I somewhat found myself liking her because she simply could just not help how insane she truly was.

I found this gif of Jack to be nonetheless fitting for him. He may have been awful at the beginning without a second of doubt, but just like Chuck, they grew into their characters and found a sense of morality. Don't get me wrong, I'm not saying I would ever consider Jack Bass to be a mortal person, but her certainly made some improvements. Oh, him and Georgina Sparks make the perfect couple.

He may have always pinned Nate and Tripp up against one another and may not really know how to smile but I guess that doesn't make him a bad guy.

We all know a Nelly Yuki. Top of the class, braniac who is so beyond obsessed over their grades that they they're too busy to not come off as rude to everyone.

Eh, I don't know. She's not a bad character necessarily but we really did not get much time to know her since we discovered her towards the end. I understand her frustration with her mother keeping her family a secret from her, but she did not have to take that out on those who did not know what Carol was doing.

He may have left Blair's mom for a male model, but that didn't stop Harold from still being a good father all the way from France.

Dan is the one character I have seen be slapped or punched the most throughout the show. Serena, Blair, Chuck, and Nate have all thrown him around at one point or another for a very good reason. Dan meant so well at the beginning, but his judgement sure was clouded up throughout the series. Maybe Gossip Girl himself should be further up on the list and maybe it's just me, but I was never a huge fan of Humphrey.

Out of all of the scandal that went down on Gossip Girl, I would have to say I don't think I ever saw Rufus do anything totally immoral. Not sure how he handles having Jenny Humphrey as a daughter but he sure does a better job than I would have. He has such a good heart and honestly I wish him and Lily stayed married in the end. Side note: I would really love to try one of his waffles.

Poor Lilly, she just could not hold a steady last name...or well, husband. She may have had several shady moments, but at the end of the day Lily was one of the good ones.

Sweet, sweet Eric, he has such a good heart. Not to mention, his low key humorous remarks that get thrown in there don't go unnoticed.

Aw Nate, he is such a good guy. Besides his love triangle involving two best friends at the beginning of the show, the boy is always seeking to do the right thing. Unfortunately, his "good guy" act is always seems to lead him to these psychotic women (ex: Juliet Sharpe, Diana Payne) who use him in their scheming plans. But how could you even begin to use Nate? He's one beautiful piece of God's work.

If there was a "Most Improved" award for the Gossip Girl characters, it would have to be Chuck. His life sure wasn't easy, but he was destined to find Blair to make him see the light. I think I can speak for all girls when we say we could all use a little Chuck Bass in our lives.

All hail Queen B, also known as my spirit animal. She does not stop until she achieves her goals and because of that, I strive to be her. Her wit, charm, scheming, and devotion to those she cares for is what placed her in the Top 2.

QueenRadhi
The State University of New York at Stony Brook
2967