Emma Goldman would not have approved of the decisions out leaders are making in 2017. 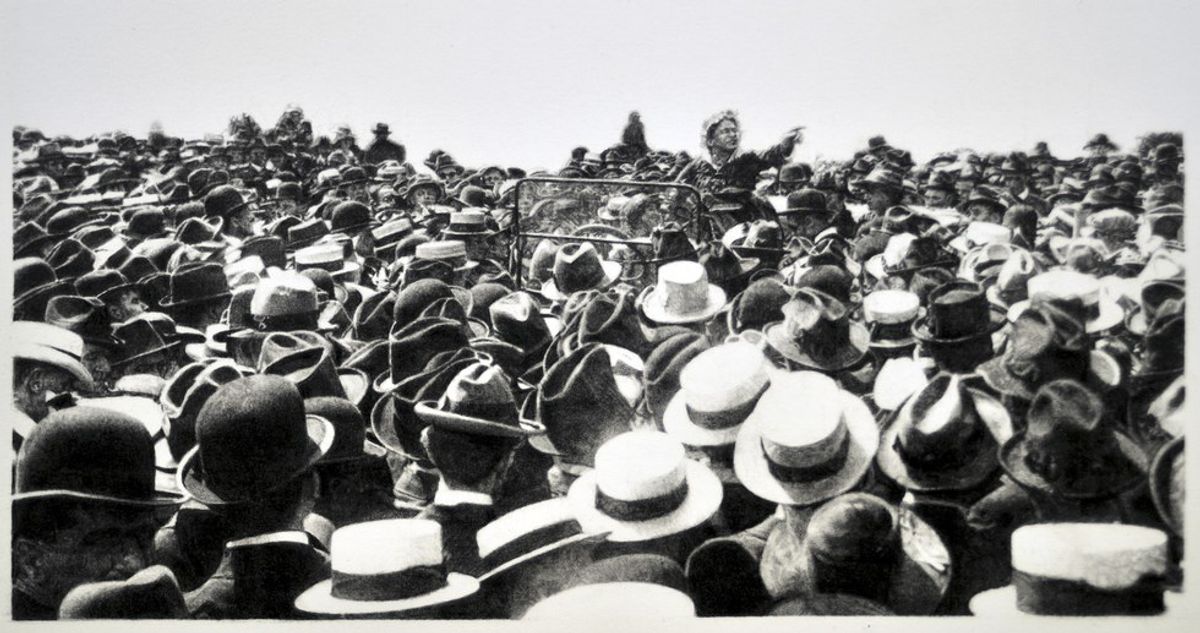 Here in 2017 America, we are living in a time of conflict and revolution. The new administration and its decisions have impacted millions of people in the United States and around the world.

Even in my place of privilege, as a woman, survivor, and ally, I find myself searching for people to stand with and look up to. I am fortunate that, through my participation with the Plymouth State University Choral's production of the musical Ragtime, I have been offered an opportunity to portray such a person.

Emma Goldman was born in 1869 in Lithuania. Her parents were Russian-Jewish shopkeepers. The Goldman family moved to St. Petersburg in 1881, shortly after the assassination of Czar Alexander II. There, Emma was well educated.

From a young age, Goldman identified as a rebel, embracing the Russian Revolution movement as a teenager.

Emma immigrated to the United States in 1885, where she worked as a seamstress in Rochester. She found herself in an unhappy marriage with a coworker, which fortunately did not last long.

In 1889, Goldman joined the anarchist movement and met John Most, who influenced her greatly. It is thought that the Jewish culture of pursuing universal justice led Goldman to align herself with anarchist ideas of a stateless society.

In the same year, Goldman met Alexander Berkman, who became an incredibly important figure in her life. She was an accessory in Berkman's attempted assassination of Henry Clay Frick in 1892, which was a means to inspire a revolution of justice. Berkman was sentenced to 14 years in prison for the crime. During his incarceration, Goldman rose to fame as a public speaker.

"We Americans claim to be a peace-loving people. We hate bloodshed; we are opposed to violence. Yet we go into spasms of joy over the possibility of projecting dynamite bombs from flying machines upon helpless citizens. We are ready to hang, electrocute, or lynch anyone, who, from economic necessity, will risk his own life in the attempt upon that of some industrial magnate. Yet our hearts swell with pride at the thought that America is becoming the most powerful nation on earth, and that it will eventually plant her iron foot on the necks of all other nations. Such is the logic of patriotism."
Emma Goldman, 'Patriotism, a Menace to Liberty' (1911)

Emma was known for her wit and ability to connect with an array of audiences. She frequently opened her speeches with a humorous quip and closed them with a call to action that inspired expression and hope.

Among her accomplishments and experiences, Emma Goldman was a rape survivor and an early activist for LGBTQ rights, sexual freedom, birth control, women’s rights, education, worker’s rights, unions, and freedom of expression.

She was imprisoned for opposing the WWI draft and arrested on multiple occasions for inciting to riot. Eventually, she was deported to Soviet Russia (1919), where she continued to fight for justice, expressing her discontent with the state of the country. She didn’t return to the United States after her deportation, except for a brief visit in 1934.

She never stopped campaigning for equality and justice. Wherever she went, Emma Goldman was a beacon of light and inspiration.

"I did not believe that a Cause which stood for a beautiful ideal, for anarchism, for release and freedom from conventions and prejudice, should demand the denial of life and joy. I insisted that our Cause could not expect me to become a nun and that the movement should not be turned into a cloister. If it meant that, I did not want it."Emma Goldman, 'Living My Life' (1931)

We will continue that fight.

The path of change was paved by those who dared to believe it was possible. Immigrants, activists, artists, scientists, soldiers, writers, and accountants: people who took a stand, even when failure seemed imminent and it seemed no one was watching.

Freedom is created by the voices that say "this is not right, this is not who we are."

Let us never be called . Let us speak out against injustice. Let us live our lives in the pursuit of happiness, truth, freedom, and equality for all people.

It is the world Emma Goldman believed in.

It is the world I believe in.

"The history of progress is written in the blood of men and women who have dared to espouse an unpopular cause, as, for instance, the black man's right to his body, or woman's right to her soul."
Emma Goldman

Blog post. The Prose and Poetry of the Anarchists. Tumblr. Web. 18 Feb. 2017. https://myanarchistproseandpoetry.tumblr.com/tagge...