What The Film "The Danish Girl" Taught Me about Love
Odyssey

What The Film "The Danish Girl" Taught Me about Love

"I love you because you were the only person who could make sense of me, who made me possible." -Lili Elbe 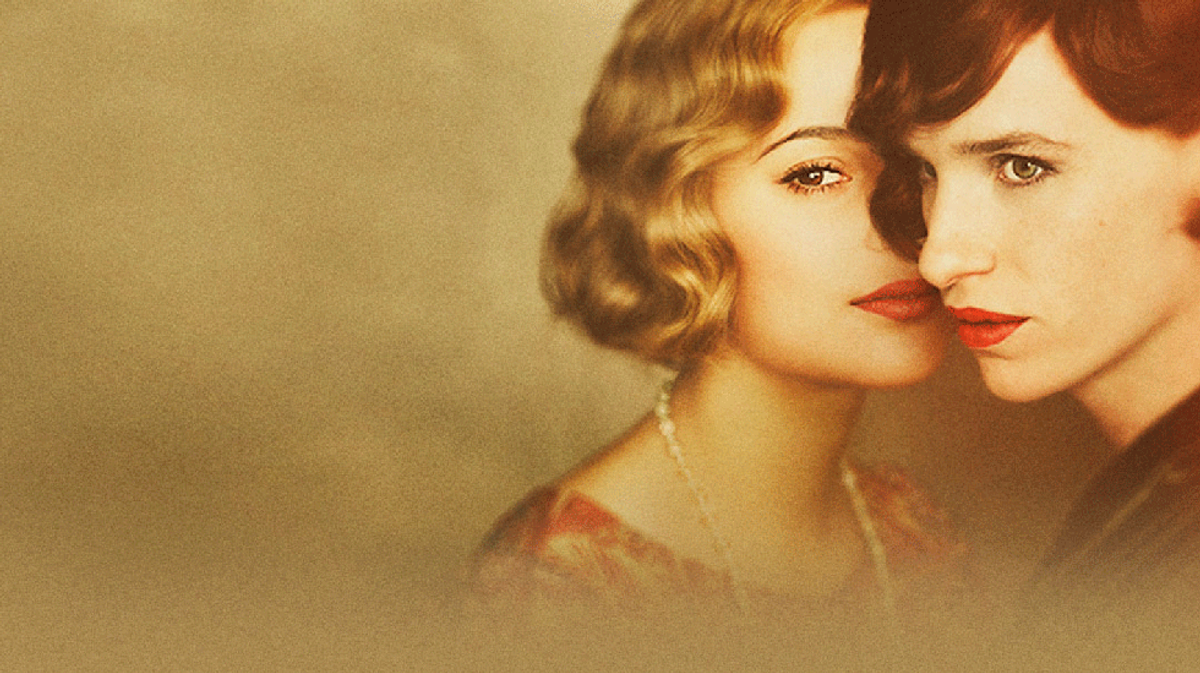 "The Danish Girl," a Focus Feature production, was released in theaters late 2015 and early 2016 all around the world. It has captured the hearts and souls of the viewers who get a very intimate look into the lives of Einar and Gerda Wegener, a Danish couple whose marriage is put to the ultimate test when Lili Elbe, Einar's true gender identity, has finally come to light. I won't spoil the plot of the film, because it is phenomenal and everyone should see it, but I learned a significant amount about love from this film. It's raw, enticing, shocking, and ultimately eye-opening. The film has already been nominated for four Oscars, with Eddie Redmayne and Alicia Vikander delivering astounding performances.

The story of Lili Elbe is famous among the transgender community, as many people look to her bravery as a transgender pioneer.

Here are four lessons I learned about love from this beautiful and passionate story:

The film's story line, inspired by the lives of the Wegeners, has the viewer on the edge of his seat throughout the entire film, wondering what will happen next. There are twists and turns, circumstances that one wouldn't expect that ultimately add to the complexity of the main relationship in the film: Einar and his wife, Gerda. The initial conflict between the two is their unspoken competition in their work, but that is forgotten soon after Gerda sees a significant change in her husband after Lili makes her first public appearance. Einar and Lili share the same body, but are two different genders, and ultimately two different people. Even though Einar loves Gerda unconditionally, he cannot help but listen to the call of his heart and let Lili begin to take over and reveal his "true" self. They've been married six years, as husband and wife, and their lives were about to drastically change. Gerda is aware of the transition, and does not know how to handle it, but ultimately cannot find it in herself to hate the person she is married to, because ultimately love is love, and she couldn't bear to see the person she loves unhappy.

Despite the turn of events, Gerda still loves both Einar and Lili, and tries with all her might to accept what was happening to her husband. In the early 18th century, it was almost unheard of for Einar's "condition," as explained in the film, to exist. He was looked at as mentally insane by doctors, and this took a heavy toll on their marriage. But despite Lili slowly transitioning, Gerda does not look at her as a freak or outcast her. Rather, she helps in any ways she can, despite personal battles she has as a wife losing her husband. But not even gender can stop their love from flourishing; it just worked in different ways than it had before. They supported each other in every way that they humanly could, even when they fully didn't understand what was going on. All they had was trust in their love; that it would be enough to guide them through the trying times. One of my favorite quotes from the film is Lili speaking to Gerda: "I love you because you were the only person who could make sense of me, who made me possible."

There was an incredible amount of sacrifice between Gerda, Einar, and Lili. In the beginning of the film, Gerda asks Einar if she can sketch him as Lili, which is ultimately where the whole journey starts for Lili's visible transition. One aspect of the film that gives it such depth is that the viewer can see the internal struggle that Einar and Lili are having together, ultimately leaving Einar to be severely unhappy, while in constant battle with deciding whether or not Lili is who he truly is. It's an interesting concept to watch that as Gerda's success with her art soars, Einar's emotional state worsens to the point where he no longer can be Einar, and Lili takes full form. Which, in a sense, was a blessing in disguise, because it pushed Einar to realize that he was not truly happy with himself, and ultimately Lili was who he was meant to be, making the transition possible.

From Gerda's point, she had to sacrifice her marriage for Lili to be truly happy. Obviously, this is something that a person would have a hard time doing if they still love their spouse. Gerda has a hard time with transition initially, not really knowing what to do or how to feel. In the early 1900s, it was almost unheard of about what her husband was experiencing, so for Gerda to be supportive of Lili, I think, took an extreme amount of courage and sacrifice, because in reality, Gerda ultimately loses her husband. Lili is a woman, someone entirely different than Einar, and Gerda had to deal with the loss of Einar all while helping Lili transition. I think that a lesson in the film is that sometimes sacrifice is hard, sometimes almost unbearable, but what makes it worth it is seeing how happy another person is.

Through the changes, the heartache, and tears, both found ways to unconditionally love one another despite the odds. I think it is by far one of the most profound lessons I've ever learned from a film. Even though Gerda lost her husband, Einar, she was with Lili throughout the entire transition, because her love transcended the limits of what society deemed "love" to be. Gerda could have easily left, hurt and angered that her husband wanted to be a woman, but I think the fact that she stayed is one of the most beautiful aspect of their unique love story. I think one of the most important themes of this film is that love cannot be defined by gender; it cannot be boxed in by something that seems so binary when, in reality, it is this powerful, even arguably divine, force that drives, changes, and in this case, saves people. In an interview, Eddie Redmayne talks about one of the biggest lessons he learned from the film was that the idea that gender and sexuality were not related necessarily. One of the film's aspects that really moved me was the way that Gerda and Lili continued to love and support each other because of the way that their love was unconditional; it was pure and good and ultimately, they wanted what was best for the other.

Ultimately, I learned that love is messy, and life will challenge you in ways that you couldn't even imagine. There will be trying times in relationships and marriages, and there will be times when you will have to put that other person's happiness before yours. I learned that difficult things will happen and ultimately true love will triumph over all obstacles. Never being in a serious relationship like the one above, and my head filled with the notions of fairytales, this love story really opened my eyes and showed me what real love looks like.

Love is a beautifully tragic thing, sometimes horrible to harness within a person's soul. But I've also learned, that most of the time, it is completely worth the risk, the fall, the crash, and once in a lifetime, a safe landing.

For more information about the film, check out the IMDB page.