My Experience At The Women's March
Odyssey

My Experience At The Women's March 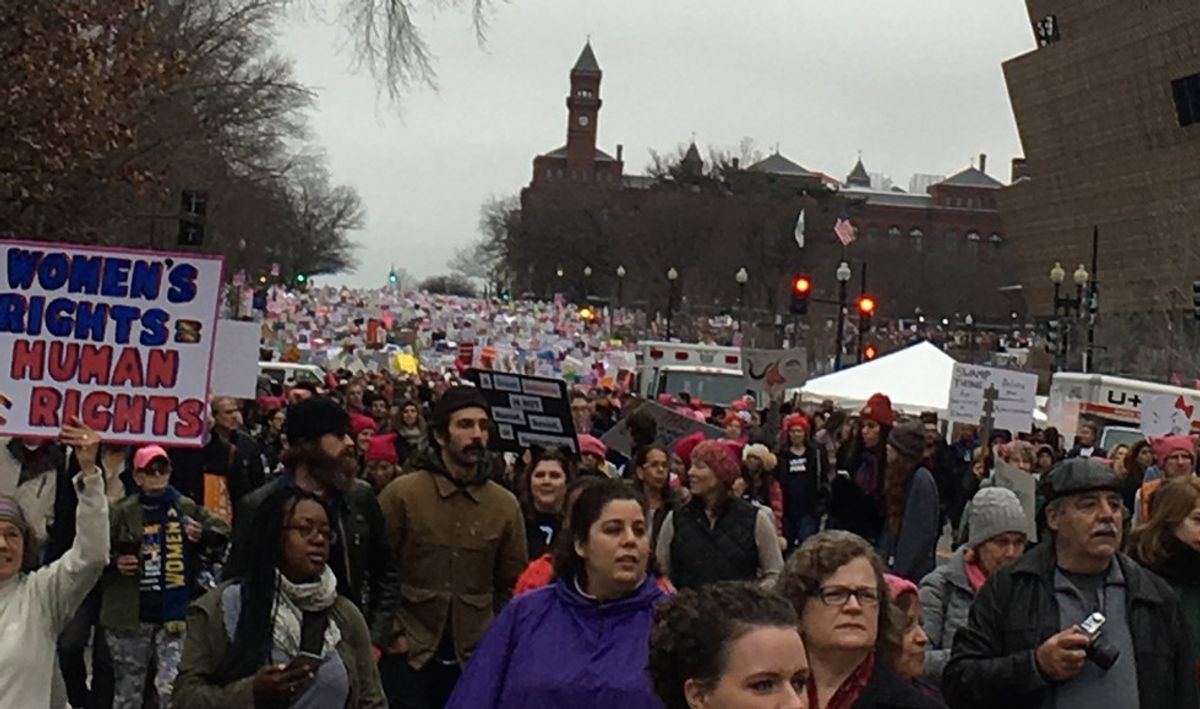 “Going to the Women’s March was like waking up from a nightmare to find that the monster was real, but all your friends were there with sticks, and torches, and unflattering hats to beat back the darkness” - Samantha Bee

As great of a metaphor as that is, for me, the March was like a breath of fresh air. I had planned on visiting a friend in Georgetown sometime in January, so I made an impromptu decision to go for the Women’s March on Washington. My friend wasn’t sure if she would be able to go with me at the time, but I didn’t care that I might be alone. I felt like I had a bigger purpose that couldn’t be compromised by the fear of wandering in D.C. by myself. I accepted the potential dangers of being in D.C. around the Inauguration, but to be honest, I didn’t care. I owed it to women all over the world to march anyway.

My Megabus arrived in D.C. around 2 p.m. on Friday. The angry feminists who were pouring in from buses and trains came face to face with the die-hard Trump supporters coming back from the Inauguration. Everyone in Union Station belonged to one of the those two groups, and I have to say that I have never seen a more interesting dynamic among interacting people. I can’t even describe the tension and mood in the place. The Trump supporters were more vocal, and the people there for the March looked as if they were witnessing a circus.

I loved seeing a group of 12 year-old boys on some sort of prep school field trip wearing those infamous red hats. Yes, being twelve is so difficult, and we need to Make America Great Again for those children! What do they want? To go back to a time when they got to nap during school and have snack time? DON'T WE ALL. I was taken aback by the amount of brainwashed children I saw. I was further confused when I saw a young teen boy and his father wearing a slew of Trump pins … on their Yarmulkes. You would think their Jewish relatives would have told them how things went last time a demagogue rose to power…

On Saturday, my friend and I left Georgetown around 9 a.m.. After having multiple full buses pass us at the stop, we decided to just get an Uber. He dropped us incredibly close if you consider how many streets were shut down. Getting out of that car was like getting dropped off in the middle of Time Square on New Year's’ Eve. Everywhere you looked, there were massive amounts of people, and you immediately got a rush of adrenaline. I was getting chills seeing how powerful this movement had become. We had no clue where to go and just followed the crowd. We ended up on 7th street, near the intersection of Independence. (The stage and beginning of the March was at Independence and 3rd). We could see a big screen maybe 50 yards away, and we thought we were pretty close to the beginning. It wasn’t until we saw the aerial photographs of the whole event that we realized we were not even close.

The crowd was insane. We were packed like sardines and stood there for four hours during the rally. Any movement required linking arms to prevent losing someone in your group. If someone had to get through to the porta-potties, you almost had to hug the person in front of you to make room. People were boosting each other up into trees, where they sat to get a better view of the big screen. Others pushed through dense hedges to sit on a giant wall. And the extremely brave climbed on top of the porta-potties. People who came back from the bathroom said it was extremely weird knowing someone was sitting on top of them. Photographers in the trees and on porta-potties took pictures of the event and offered to take pictures of others with their phones. I wish I could see the shots they got.

The signs were absolutely fantastic, from Trump puns to fierce feminism lines to giant pictures of uteruses. And then there were the hats. You know what I love most about the pussy hat trend? Someone had an idea for it, shared a knitting pattern to Facebook, and next thing you know, millions of women are knitting their own hats. It’s hilarious and yet touching to see how much of an impact one person can make by spreading the word.

After standing in place for hours, a few people fainted. The crowd was so massive that everyone in the area had to yell “Medic! Medic!” in unison while pointing in the direction of the patient. One woman near us had a seizure, and we had to cram into each other even more to allow her to be transported out. The people on the porta-potties took charge, spreading the word in a chain to get people out of the way and update approaching medics.

Overall, I was so impressed with the people there. It had been so long since I was surrounded by a group of only kind-hearted, compassionate people. When I say the March was like a breath of fresh air, this is what I mean. Even though we were all angry and frustrated, there was not one ounce of negativity. Everyone was uplifting, and people were so supportive of the strangers around them. It was like a giant message: “You can try to demoralize us, but we won’t let it affect us”.

Going on the fourth hour of speeches (which included Alicia Keys, Scarlett Johansen, and one of my personal favorites, director Michael Moore), the marchers were getting impatient, yelling "March! March! March!". We finally figured out through social media that there were too many people to follow the original march route; Independence was completely blocked. At that point, we to march on the Mall instead. Everyone collectively pushed in the opposite direction, and the march started.

My friend and I tried to stay as close to the sides as possible to beat the mad rush out after the event. All of the people split up between roads, and the hordes of people funneled in and out of the blocks around the Mall. Just when you detoured around one block, you were met by more people coming from the opposite direction. It never ended.

At one point during a slight upward incline, it didn’t seem like there were too many people around me. I turned around to witness a sight that still renders me speechless: hundreds of thousands of women behind me, with the Washington Monument at the very end. That’s when I fully understood what this unique, unprecedented sisterhood was about. All of these people literally and metaphorically were behind me. They supported my goals and dreams, and they let me know that I will not fight alone.

We could tell people were headed to the White House, so we decided to make a break and head home. We had heard among the crowd that the Metro was shut down due to the amount of people, so we walked. Later, we saw coverage about the women who went on to the White House, and all of the signs they left at the fence. Museums from all over the world sent staff to retrieve signs for archives, and I held onto mine as a living piece of history.

The event was unforgettable, and the turnout was mind-blowing. (Sorry Donald, but we did indeed have 3x more people on the Mall than your Inauguration did!) Every continent (even Antarctica!) had sister marches, and sometimes groups of just six people held marches in their small towns. This is not just a huge movement, this is a revolution.

The Women’s March on Washington was a life-changing experience. In history class, you learn about Seneca falls, Selma and the Civil Rights March on Washington. I am proud to be a part of history - one that we still have control over writing. I can’t wait for my grandkids to learn about this event in school and excitedly raise their and hand, yelling “My grandma was there!”. I can’t wait for a new wave of politicians that bring people together instead of dividing them. And I can’t wait for a world where men and women are considered equal.

Did you go to the Women's March or a sister march? Tell me about your experience in the comments below!

Kassie Hsu
Baylor University
4657
Panda Whale
Here are 100 things I'd rather to than study. I know the semester just started, but
Featured