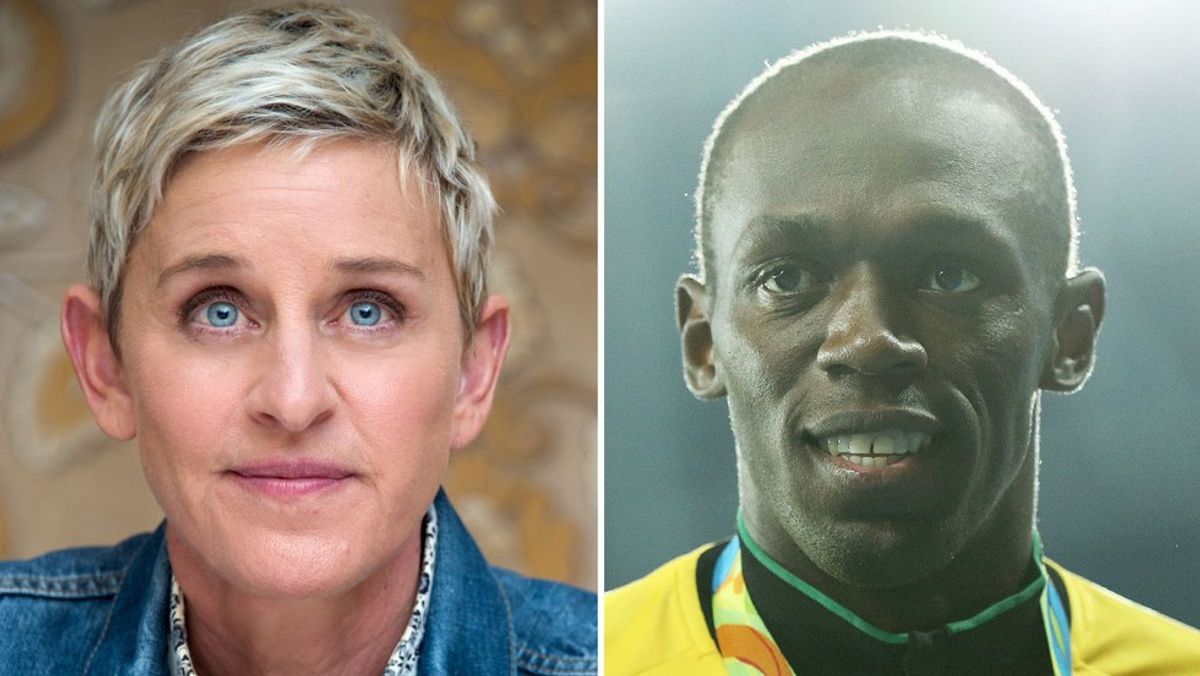 Recently, Ellen DeGeneres posted the picture above in response to Usain Bolt's AWESOME performance during the Olympics. The picture, like many pictures celebrities’ posts online, caused a clash of opinions. Some understood the humor in the purpose of the picture while others were reminded of a happening in America’s dark past. Slavery. When I saw the picture, I thought it was funny. I remember saying to the screen. “I feel you girl, if that could happen I would wake up at 9:05am and still make my 8am class.” Then my sister showed me some of the racial comments and remarks and it was pretty upsetting. Come on! It’s Ellen DeGeneres, one of the nicest and most helpful people on earth. She's helped people regardless of their race, color, blood type, vein type, hair do, sexuality . . . nothing she has done justifies labeling her racist.

Labeling and situations like this continue to occur in America because the issue of race is often dismissed and written off. Whenever an issue involving race comes up the general solution proposed is let us just love one another. The problem is LOVE is not attainable if we cannot acknowledge the truth about race today or in the past.

In order to take an actual step forward towards love:

We need to understand that race is still very much a problem.

Slavery lasted in The United States of America, people of darker color or any hint of black were beaten, raped, sold, tortured, devalued, disrespected, avoided, treated like diseases . . . a plague, ridiculed, torn away from loved ones, lynched by people where the majority did not see anything wrong. That kind of hatred, that kind of heartlessness does not just disappear because some laws of the land changed. It is in the schools, communities, it’s in the government, it’s in the justice system, It’s in the teachings and lessons passed down from generation to generation, it’s still everywhere. People of darker color are still being oppressed, stereotyped, belittled and if everyone cannot understand that fact … we’ll keep going in circles and farther away from love.

We need to understand that some people choose to ignore racial oppression because they do not experience the oppression which is a privilege.

We need to understand that racial oppression is often disregarded because people place their comfort over the cries of the oppressed.

During the cases of the deaths of Philando Castile, Alton Sterling there was a huge rise in the togetherness of the Black Lives Matter movement. One of my friends (who is white) and I had a conversation with the owner of a post that condemned the Black Lives Matter movement and asked that the constant reference to slavery needed to stop because it wasn’t this generation's fault as well as the true purpose of Black Lives Matter. We also explained that slavery needs to be referenced because its impact is still a big part of America today. In reply, the person disregarded all the conversations and told my friend “Good luck with all that guilt.” And I asked, “Is that really why you have chosen to ignore the pleas and cries of people of color because you don’t want to feel guilty?”


The impact slavery has had on this community is not being acknowledged and people of color are hurting and drained. Hence why many did not see the humor in the picture. Color is a big factor in the foundation of America and it all traces back to slavery. No one but our ancestors are responsible for slavery. However, how we choose to act towards the impact it has had and is having on America today is our responsibility.