Elevator Sexism, Or How The Patriarchy Got In The Way Of A Funny Joke

Elevator Sexism, Or How The Patriarchy Got In The Way Of A Funny Joke

How a 90 second ride turned into a situation that's not okay. 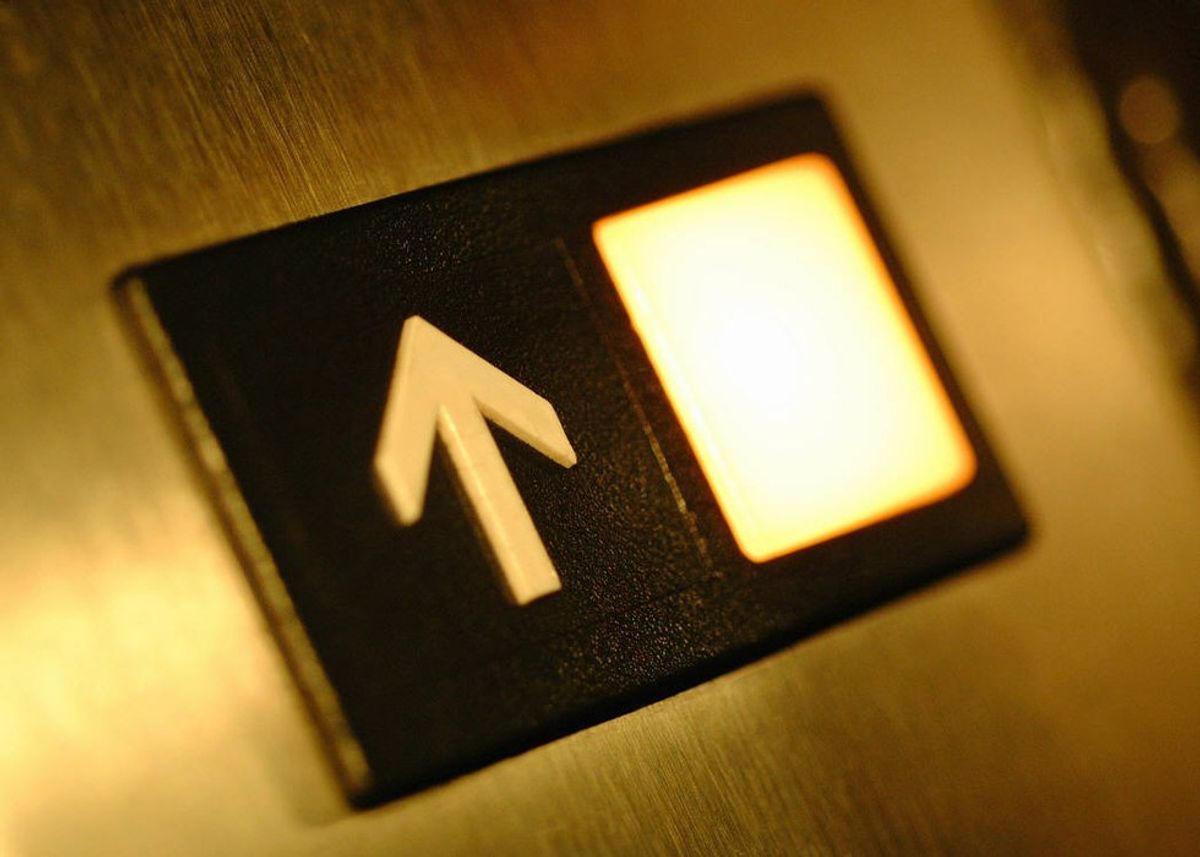 What Would Dale Do

You may have heard about elevator pitches, a 30 or 90 second pitch of an idea to someone important. While I have had to write many of them and gave my fair share at a literary writing fair, I’ve never had such a startling one given to me.

It started as a joke, one between two athletes and two coaches I was sharing the elevator with. I ignored them, invested in the BuzzFeed article I was reading, until they roped me into the joke. “Look, even she rolled her eyes!” To join in on the fun I did my best, bratty, dramatic eye roll and "ugh," leaning onto the wall and digging my nose deeper into my phone, making everyone laugh. All was fun and games until:

“She doesn’t count, women roll their eyes all time.”

I looked to the other coach, asked if he heard what his friend just said and how not okay that was. I was not being backed by anyone. Everyone was looking at the floor. One of the students cleared his throat. Finally, I looked at the man himself.

“I have a girlfriend,” he said in the same tone I’ve heard racists say, “I have a black friend.”

“So do I,” I didn’t say, since it’s not remotely true. But I wanted to, just for the effect. Instead I just stared at him, biting my tongue, looking at his adult friend and not at my fellow students, feeling like I was about to cry.

The elevator dinged, the door opened and I followed one of the students out onto my floor in a daze.

Never in my life has anyone told me that I didn’t count. Therapy, family, friends and teachers have only told me the opposite: I matter, what I do matters and how I express myself matters. Ends up, I was wrong, because I don’t pass as having the right tools for the job. Nor do I want to. I am a woman, and proudly so. So why did an adult man feel it necessary to not only dismiss my being in, what was obviously a joke, because of my gender, and then feel the need to qualify his actions?

Over the rest of the day, this question bothered me. Why was he suddenly so hurtful when I simply played along? Then it hit: he thought he was simply continuing a joke. All women are the same, we can dismiss them all and their opinions don’t matter. By saying he had a girlfriend, he verified his insight, and I’m sure if I weren’t standing there, if I weren’t part of the joke, all the other men in the elevator would have laughed to some degree, even if they didn’t agree. Comedians do it all the time, and we laugh! We all laugh because women should be dismissed for comic effect! I can’t blame the guy, he was only following in the footsteps of Larry the Cable Guy or Jeff Foxworthy. Their wives spent money or did said something rude, how hilarious!

As many women would probably agree, the fact that we exist isn’t a joke! And if he was “just joking,” then my point is only driven home. His “just joking” is exactly what’s not okay, and not because I’m being sensitive, but because an entire gender shouldn’t be a joke. Especially when that gender is cornered in an elevator. Can’t laugh that one off.

In the time span it takes for the elevator to go from the first to fourth floor, the cultural defect of putting women last because we have actual emotions fell into place. As the only woman in the elevator, I was also the only woman of which it had to fall upon. Is that what it feels like to be the only woman in a corner of the office? On a medical team (see "House, MD", "Scrubs")? In a super hero squad (again, see "The Avengers," "Batman v. Superman")? All around us, every day, television and magazines and even books (one more time, see "The Maze Runner"). Women in mass quantities is an anomaly, and is only just starting to emerge as a popular and normal view of humanity, despite the world population being 51 percent female.

I know for a fact I’m not stupid, and have the credentials to prove it, although I shouldn’t have to. None of my five other roommates are stupid, either, or else we wouldn’t be in the honors program. But despite it all, there I was, laughing at a pleasant joke when the patriarchy had to go and ruin all the fun once again.

Then again, I’m a woman. All women roll their eyes.