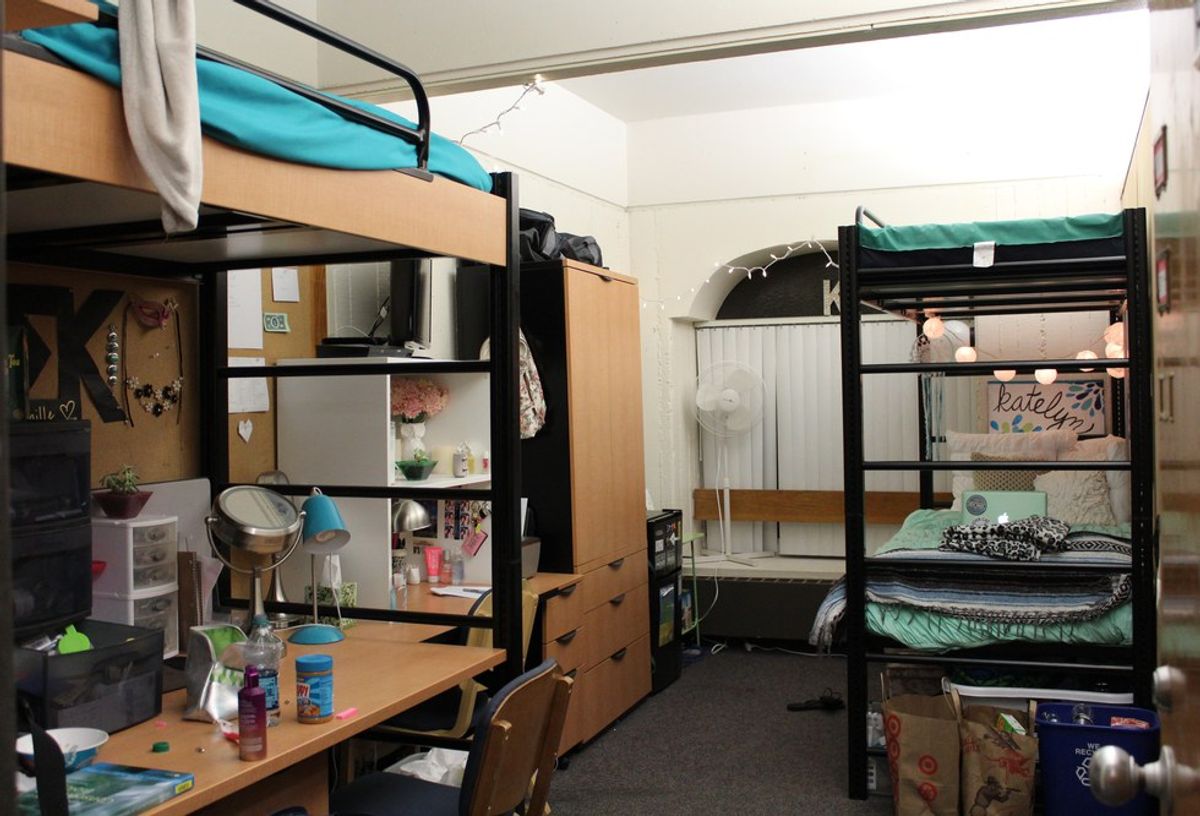 Currently in America, there is a consistent perception that living in campus dormitories has a dramatically positive effect on individual student academic success. Today I make the claim that this is not the case in regards to the Cal Poly on-campus dormitory living. This claim is only representative of Cal Poly SLO and in no way is applicable to other universities in California or otherwise. However, I hope that it may inspire other universities, and the students of them, to contemplate whether dorm living is the best solution to academic success.

First let’s take a look at the correlation of high GPA to academic success that many schools, Cal Poly included, use to market their dorms to students. Cal Poly consistently tells the student body that, on average, students who live on campus have a higher GPA. Many other universities have done this study and found similar results. However, in each of these studies, an equation is used to measure GPA differences of on campus to off campus. Most independent research groups say that these results, while expressing that dorm living has a generally positive effect on GPA, are inconclusive due to different campus policies and environments. So, in order to really understand if this statistic is accurate for the Cal Poly campus, we have to break down the on campus living opportunities.

When accepted to Cal Poly, freshmen are given one of several options to choose from. In colloquial terms these are: Cerro Vista, PCV, Red Bricks, the Towers, and the usually forgotten North Mountain. For those of you that didn’t know, Cal Poly has gradually been accepting a larger amount of students onto campus. For this reason, the number of beds in each of the dorm buildings has increased by one. As an architecture student I can tell you for a fact that shoving another bed into a room, which was already constructed for the tightest space possible, is how you build a hostel or a homeless shelter. Not to say that hostels or homeless shelters are bad things, rather to say that paying a lot of money to live in them is ridiculous.

Many universities mention a reason for their dorm living high GPA correlation being that the dorms are so close to academic buildings that commuter students wouldn’t necessarily use due to lack of proximity. Normally, I’d agree. In Cal Poly’s case: not so much. Currently I live off of N. Chorro and Foothill. This is very much off campus, more so than Mustang Village or Valencia, and the walk from my apartment to the most important academic buildings is shorter than when I lived on campus. The only essential campus building that is closer to the dorms is the Rec Center that, if you don’t like working out, isn’t an important building whatsoever. The amount of distance between you and the important buildings of campus is even more if you live in PCV or the Towers. PCV and the Towers shouldn’t even be considered on campus.

That debunks the proximity myth, but how about the cost one? Cal Poly never fails to repeat how much of a cost benefit it is to live on campus. I’m not sure what everyone else is paying for their apartments outside of campus. So I’ll use myself and a friend as an example. For privacy sake, we will call my friend “Mary.” Mary currently lives in a residential home off of Los Osos Valley Road. She pays 400 dollars a month rent with 100 for utilities including Wi-Fi, water, electricity, etc. Mary shares a room with her best friend. The room has just short of double the square footage of a Red Brick room. For a Red Brick room with two people, the cost per month is around 800 dollars for almost half the square footage. In my case, I lived in Cerro Vista in a double room, the first year they started doing double rooms. I currently live within a 12-minute walk to Dexter Lawn and pay 700 dollars for a month, utilities included, for my own private room that has double the square footage of my Cerro Vista room. The current cost of living in Cerro Vista is around 600 dollars per month with 700 for winter break alone. So, the cost evens out to be around 700 a month for a fraction of the comfort. I won’t include the dining plan in here, but let’s just say that on-campus dining may need some work.

Now, after putting away the myth of proximity and cost, let’s look at the comfort of campus living. I will say that I hated my freshman year living situation. Ironically, this is the first question the counseling center asks you when you go there, perhaps there’s a trend. I had to live in Cerro because I was out of state and couldn’t leave for winter break. I shared a room with a great guy, still a good friend. However, my roommate and suitemates were not architecture majors. I don’t want to say that architecture necessarily has harder work or has more of it, but I will say that my roommates did not have to pull two all-nighters in a row at any point throughout the year. Many times I would come home from studio at midnight to find my roommates having a party. This meant that I couldn’t sleep. The on-campus living situation is organized in a way that introverted students are thrown under the bus. On top of this, there is no level of comfort or quality of living within the dorms. I will break it down for you architecturally. A common single person prison cell is about 50 square feet. The Cerro Vista Apartments are about 100 square feet for two people. That means you are getting the same accommodations that prison inmates do, except you’re paying six to seven hundred dollars a month for it. The comfort level here is ludicrously miniscule. You aren’t paired up with your roommates based on anything other than when you apply for housing and then are forced to share a prison-cell-sized bedroom between the two of you. Of course, this is different from other on campus options where you are paired based on interests or major. But apart from taking some of the same classes, these interests are surface level at best. This doesn’t even begin to examine the small kitchen units, the disgusting community style bathrooms, or the lack of parking availability for students who aren’t in PCV, though these are all contributing factors to the horrid living situation Cal Poly provides for incoming freshman.

The reason for the correlation of high GPA and on campus living is flawed. I thoroughly recommend living off campus for anyone, freshman or otherwise. You will meet people through classes, clubs, and your neighbors. There is no need to live on campus and no outstanding positive circumstance to justify it at Cal Poly. As always I’m sure many people enjoyed living on campus, hence the popularity of PCV. Despite this, I urge the Cal Poly Corporation to rethink their efforts to house students and recognize that comfort, academic success, and quality of life are more than just statistics.

Caitlin Marie Grimes
University of South Florida
9634
Beyond The States