Whether the Senate confirms Betsy DeVos or not, please be aware of how dangerous she is to the future of our education. 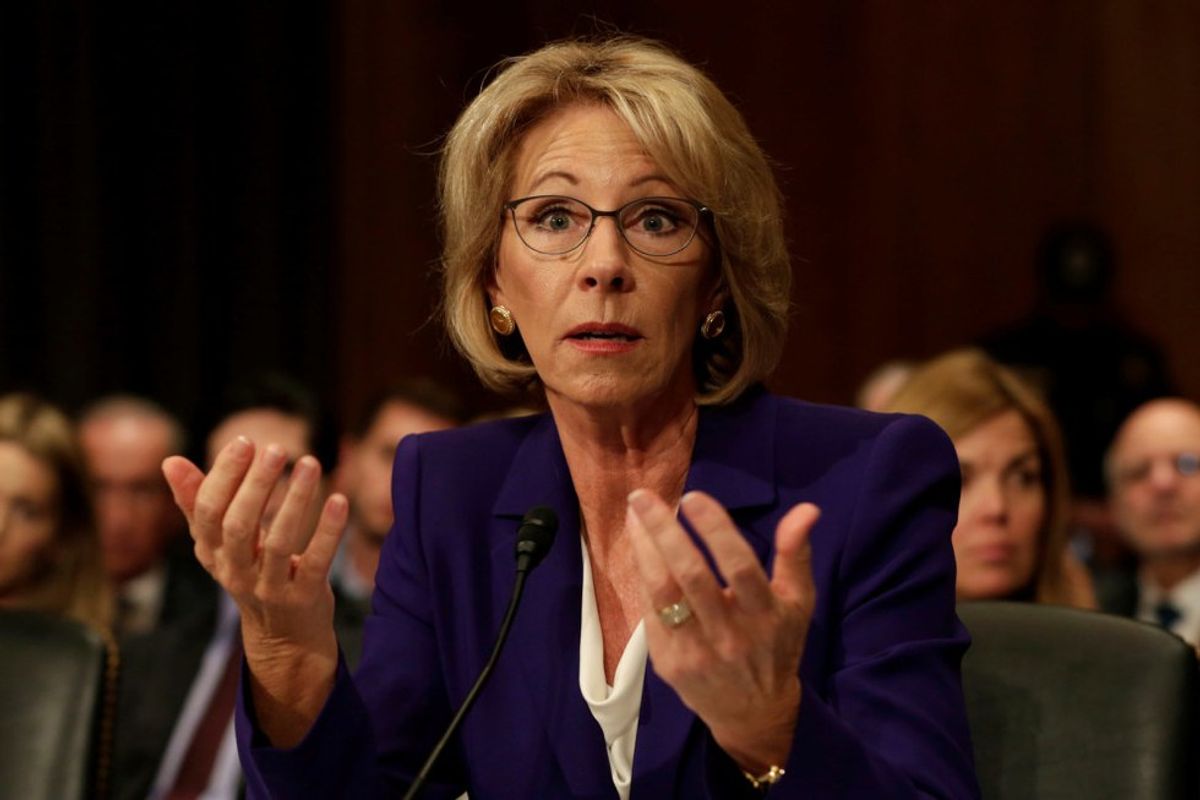 Betsy DeVos, President Trump's secretary of education nominee, is set to undergo her confirmation vote between today, February 6, 2017, and tomorrow, February 7, 2017. Her nomination has been met with well-deserved opposition, as she shows profound ignorance toward basic policies such as Title IX, the Individuals with Disabilities Education Act (IDEA), and the debate between proficiency vs. growth. Clearly, her nomination threatens the safety of women on college campuses, students with disabilities, and students who struggle moreso than others in a school setting.

As a result, Ms. DeVos threatens equal, quality education for all, from our children first starting school to those seeking higher education. Her confusion over Title IX also calls for a safety concern. If the Senate (which is currently at a tie, with Republican Senators Lisa Murkowski of Alaska and Susan Collins of Maine agreeing DeVos is unfit) confirms Ms. DeVos by the end of tomorrow, we jeopardize our right to attain equal, quality education in America.

In order to understand just how much lies in the balance of Ms. DeVos' nomination, watch her responses to the Senators' questions below.

Above, Senator Bob Casey (D-PA) questions Ms. DeVos on whether or not she will "uphold that 2011 Title IX guidance, as it relates to sexual assault on campus," a serious problem for young women in particular. In her response, Ms. DeVos displays astounding confusion and unwillingness to commit to Title IX, claiming it would be "premature" of her to do so.

Beyond troubling, Ms. DeVos' lack of knowledge on the subject and inability to coherently commit to either a yes or even a no puts thousands of young women at risk. As Sen. Casey explains, "One in five women are the victims of sexual assault on campus," with a majority of them never reporting their abuse, assault, or rape. One in sixteen men are also assaulted while in college, according to the National Sexual Violence Resource Center.

Her lack of preparation also shows carelessness. Is Ms. DeVos aware of the consequences of sexual violence? The physical, psychological, and emotional trauma that victims have to live with? According to the Center for Disease Control and Prevention (CDC), victims have to manage a number unwanted STIs and STDs, unwanted pregnancies, PTSD and symptoms of, depression, social isolation, and others. Her shameless attitude is insulting, to be frank.

Before touching upon IDEA, Senator Hassan (D-NH) asks Ms. DeVos whether or not she will "...make sure that children with disabilities will not have to sign away their legal rights in order to get a voucher, should a voucher program be developed," such as the McKay voucher program in Florida. Ms. DeVos, once again, refuses to definitively answer the question (while supporting the McKay voucher program, which has a history of making students sign away their rights, as she does).

On IDEA and whether or not Ms. DeVos was aware that it was a federal law, Ms. DeVos admits that, "I may have confused it," but how and with what, she does not explain. Both to Sen. Hassan and undoubtedly thousands of Americans who live with disabilities, the ignorance here is beyond troubling. As with Title IX, Ms. Devos' carelessness and lack of preparedness as the nominee is quite clear in her substance-less answers. A lack of experience is also blindingly obvious.

In his questions, Senator Kaine (D-VS) also touches upon IDEA, stating, "All schools that receive federal funding, public, public-charter, or private, should be required to meet the conditions of the Individuals with Disabilities Education Act. Do you agree with me or not?" Ms. DeVos simply replies, "That is worth discussion," but explicates no further. She previously says that it should be an issue taken up by the states, even though it's a federal law.

According to Thomas R. Wolanin and Patricia E. Steele of The Institute for Higher Education Policy, "In 2001, 78 percent of adults with disabilities reported that they had a high school diploma compared to 91 percent of the general population," and "Only 57 percent of youth with disabilities received standard high school diplomas." Through these numbers, is it not clear that we, as a society, are not doing enough to support and encourage disabled students to pursue an education equal to their neurotypical and able-bodied peers? In that same article, Wolanin and Steele even comment, "In higher education, the student is protected against discrimination and provided an equal opportunity, but there is no process aimed at achieving success," a shameful statement indeed.

With Ms. DeVos as the face of our children's education, we cannot be confident we'll see an equal access to quality education for all students.

Proficiency vs. Growth, Senator Franken (D-MN) introduces to the hearing. On the debate, particularly whether it's advantageous to use tests to measure proficiency or growth, where does Ms. DeVos stand? From her muddled answer, she most likely hasn't heard of the debate at all. In fact, Sen. Franken has to explain both proficiency and growth to her, and why, in his opinion, growth is the more advantageous strategy to use with students. Ms. DeVos remains confused.

How could the nominee for secretary of education not have a clear stand on this debate? Besides that, how could one not have ever heard of it whatsoever? Besides her complete lack of experience, did she do any research before this hearing? Many would rightly say 'no.'

Senator Warren (D-MA) questions Ms. DeVos' qualifications and whether or not we can be confident in her abilities as secretary of education. Ms. DeVos has no experience in running a bank, even when the Department of Education manages the $150 billion invested in students each year--that's not to mention the loans and student debt as well. Ms. DeVos has also never personally overseen or participated in a trillion or billion dollar loan program.

After speaking about the scam that was Trump University, Sen. Warren then asks, "How will the Trump administration protect tax payer dollars from waste, fraud, and abuse by colleges that take in millions of dollars in federal student aid?" Ms. DeVos responds with an answer that shows she has no plan. She then refused to commit herself to the Gainful Employment Rule, appearing unsure as she said she would "review" it. She did not explain the cause of her hesitation.

It's safe to assume that, like Title IX, IDEA, and Proficiency vs. Growth, Ms. DeVos was simply unaware of the Gainful Employment Rule, to say the least.