Why The Donald Trump/"Attack On Titan" Meme Is Actually Terrifying

The harmless meme that could prophesize a harsh reality. 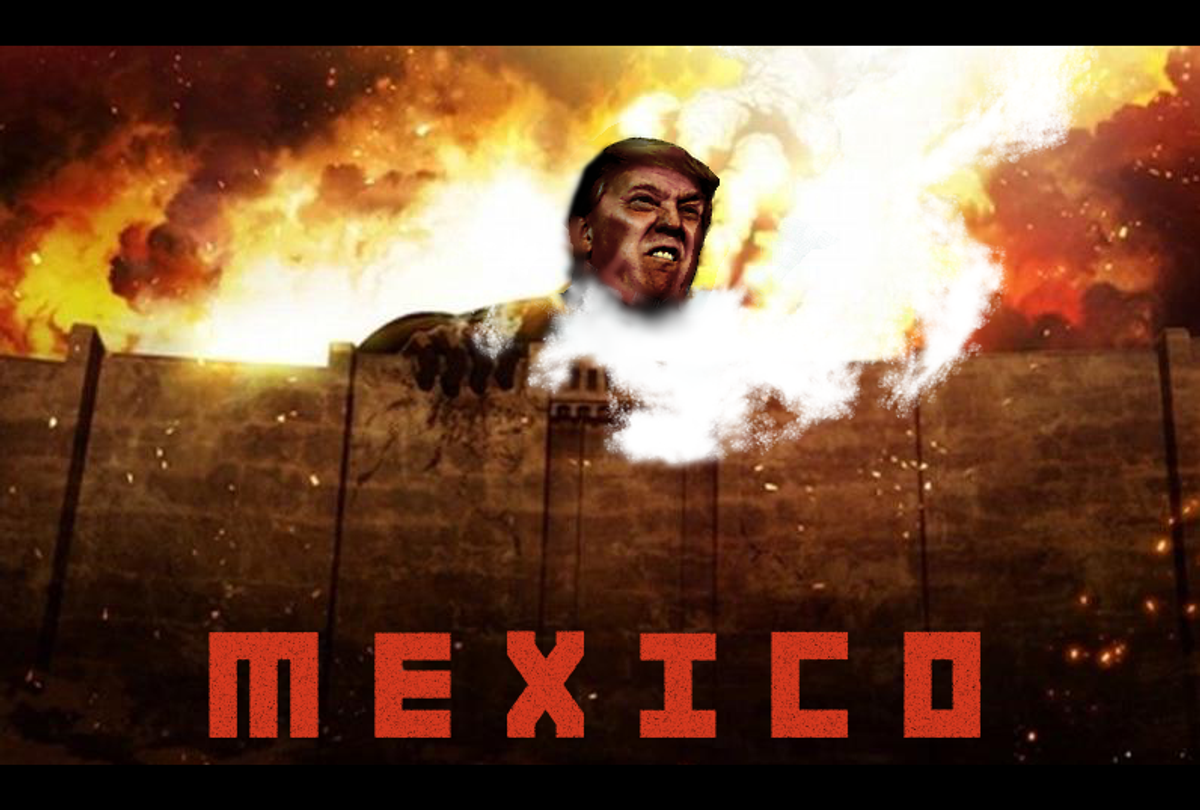 When Donald Trump first announced that he would be running for the presidency, I--like many people--giggled and popped some popcorn, figuring I would wait out the hilarity and watch as this billion dollar man child plummeted before the entirety of the nation. Don't get me wrong, he's still managed to make a complete fool of himself (not that this is a difficult feat); his idea of distancing himself from the career politicians is that of utilizing sexist language or displaying blatant cowardice (e.g. his having bailed on the most recent debate), neither of which are traits that this nation should find appealing in a candidate for the presidential office. The appalling part of these past few months, though, is the fact that he just doesn't seem to go away. Despite the fact that he carries on like a toddler let loose from his mother's leash, so many potential voters seem to be finding some sort of silver lining when it comes to his platform (which isn't something I quite understand).

I would imagine that everyone has endured Trump's explanations of his bigotry-wall (let's call it what it is), but in case you're unfamiliar, Trump wishes to construct a wall around the southern border in order to prevent immigrants from crossing into the United States. Aside from the fact that the construction of the wall won't fix the issues that he's addressing, given that many of these people are fleeing violence and openly surrendering to soldiers that happen to be on patrol, Trump's idea of barricading the country harkens back to a certain anime that took the world (well, Tumblr and Hot Topic, at least) by storm in 2013: Attack on Titan.

For those unaware, "Attack on Titan" follows the life of Eren Yeager, a young man that lives within behemoth, concrete walls. Aforementioned walls were constructed as a means of protecting the humans from gigantic, yet humanoid creatures called Titans, which consume human beings for sport.

Sound horrific? Because it is (but it's also fantastic, and there's a reason your weeb friends keep recommending it). The above photo, and others like it, began circulating not long after Trump made his announcement about the wall, and at first, it was a relatively laughable meme, just like any other, primarily because no one truly thought that Trump would make it this far. However, now that he's managed to cling to our television sets like the turd that just won't drop, we are forced to contend with his ideas as something to find terrifying, not merely comical.

As someone that has studied literary theory, there is a plethora of analysis that can be performed utilizing "Attack on Titan," but for the sake of the bigotry-wall, we'll be using Marxist theory. Fundamentally sparked by Karl Marx, this tactic is a means of examining a text through that of class, determining how social and economic status affects the characters, as well as the author. Let's consider the titans for a moment.

No, thank you. No, effing thank you. Spider-titan is literal nightmare fuel.

Jesting aside, the idea of larger, monstrous humans feeding on smaller humans is symbolism that is almost too blatant. The larger, stronger creatures picking on the little guy, which isn't necessarily uncommon; in fact, it directly correlates with Trump's ideals. Think about it. He wants Mexico to finance the construction of the wall. It would be a literal case of sucking a people dry financially, which will corrupt their means of life (further than its current, unfortunate state). This isn't different from Attack on Titan by any stretch of the imagination; these people are continuously preyed upon by a power that they can't control.

The idea that the Titans eat humans is relatively self-explanatory when it comes to Trump: he feeds on the weakness of those that lack his financial comfort and refuses to empathize with those who cannot rise above their station due to limitations far stronger than anything he has, or ever will have, encountered.

As stated by the character's dub actor, Ian Sinclair, "He's a wiener." Instead of attempting to improve an awful situation, let's continue to enforce it because I'm comfortable within Wall Sina (which is literally where Trump would live in this universe).

As voters, let's be vigilant. What was once meant as a harmless meme could become a prophesied version of a harsh reality if we don't take every precaution to destroy this man's chances of winning, or any other candidate who actually thinks this would be a grand idea. Seriously, this is one anime universe we do not want to live in.