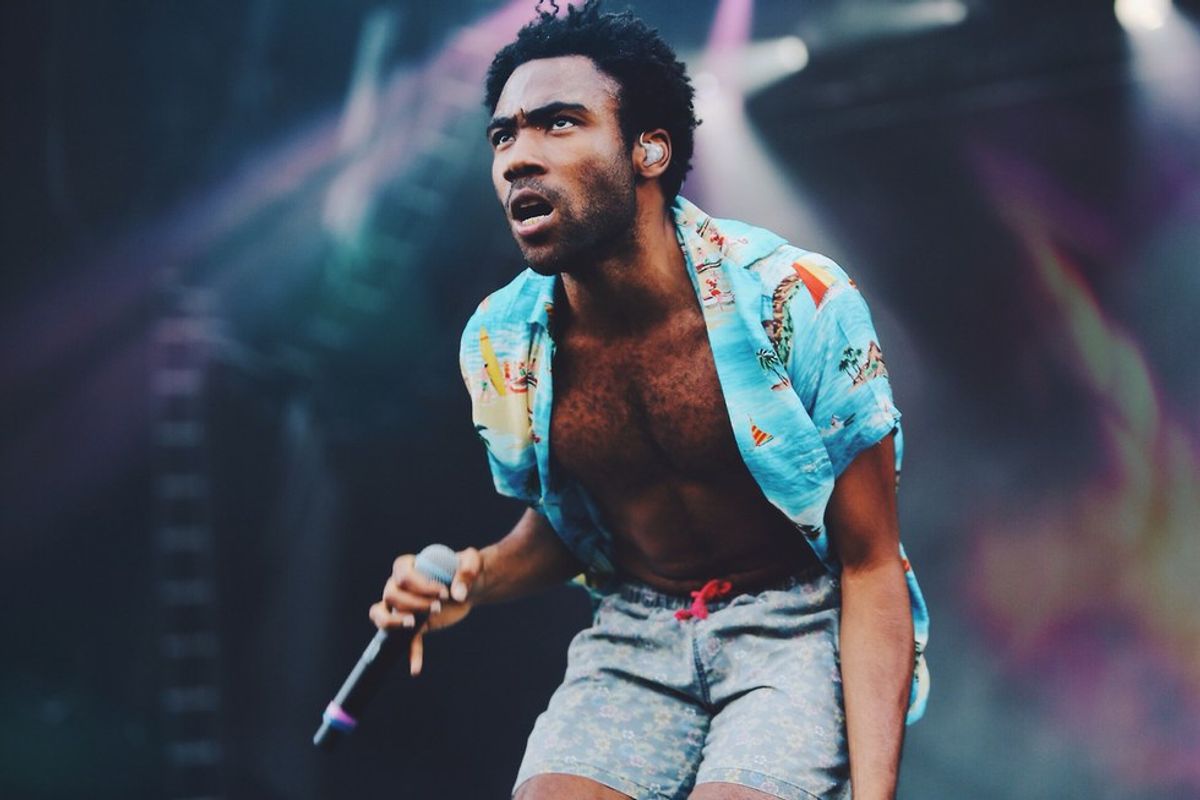 Donald Glover, who is also known by his stage name, Childish Gambino, is considered one of the most talented, multi-faceted and enigmatic figures in the entertainment industry. Glover has continually pushed the boundaries of what defines him as an artist and has never been one to fit squarely into any singular category. As Claire Suddath of Time mentioned when reviewing Gambino's first studio album, Camp, "He acts, he writes, he still does stand-up, and yes, he also raps. Some people can't be put into a box that easily."

Glover began his career by writing for the NBC comedy series 30 Rock, for which he won a Writers Guild of America Award for "Best Comedy Series" in 2009. During this time, he was also active in front of the camera and in the recording booth, helping to form the sketch comedy group Derrick Comedy while also releasing a handful of independent albums and mixtapes, as well as fostering a budding career as a stand-up comedian. Glover really began his rise to stardom as Troy Barnes on NBC's Community, a show about an endearing group of community college students who develop an unlikely bond. Although he decided to reduce his workload on the show during the fifth season in order to focus on more personal projects, he remains a fan favorite for many who watched the series throughout its run.

In an instance of art imitating life imitating art, Glover was eventually cast as the voice of Miles Morales, an African-American and Puerto Rican version of Spider-Man, on Disney XD's Ultimate Spider-Man. Glover was actually the inspiration for Morales' appearance, after comic book writer Brian Michael Bendis was inspired by a fan campaign that pushed for Glover to be cast as Peter Parker in the then-upcoming reboot of the film franchise in 2010. Glover has since been cast in a yet-unnamed role for Marvel's upcoming Spider-Man: Homecoming, which has led to speculation that Glover may get the chance to play Morales on the silver screen, or at least be a significant part of the current iteration of the Spider-Man universe in some other capacity

Childish Gambino released his first studio album, entitled Camp, on November 15, 2011. The album was met with mainly positive reviews and as far as the music industry goes, this was his first foray into the relative mainstream. He followed up this success by releasing Because The Internet in 2013. This album was a comprehensive and collaborative project, featuring the likes of Chance the Rapper and Jhene Aiko. Gambino also released a short film entitled Clapping for the Wrong Reasons and a 72-page screenplay to aid in the promotion of the album.

Sometime in late 2014, Glover's social media accounts went completely dark. His profile pictures had been changed to black images and all content from the accounts had been deleted. Although no one is entirely sure why, many speculate that Glover's departure from Instagram and Twitter had much to do with the justice system's failure to indict any of the police officers involved in the murders of Eric Garner and Michael Brown. This reasoning speaks not only to the more nuanced nature of Glover's public persona as he's grown older, wiser and generally more mature, but also to the gravity that he wields to bring attention to a particular issue with every action or inaction.

In his absence from social media, Glover was still hard at work on a comedy series that he's writing, producing and starring in. The series, Atlanta, was recently greenlit and will be premiering on FX this September. The show will focus on two cousins who have grown up together and have immersed themselves in the Atlanta rap scene. The show will draw inspiration from Glover's own life, as he was raised in Stone Mountain, Georgia, just 30 minutes northeast of Atlanta.

As mentioned earlier, Glover had forsaken social media for quite some time, which made it all the more exciting when he finally tweeted on June 17. His message? Simple. It was a link directing his followers to an app called Pharos that contained a countdown to an unknown event and some beautiful imagery that appeared as if the user were hurtling through space. As the timer winded down, a planet came into focus and we eventually end up hovering over a map of California with a beacon denoting the location of Joshua Tree, California. Gambino has announced that he will be debuting his upcoming album, which is presumably entitled Pharos, during the first weekend in September.

At this point, no one knows exactly what to expect from Atlanta or Pharos, but if Glover's body of work to this point is any indication, both projects should be full of heart and humor and will push listeners and viewers to examine life in a more critical fashion. There's an old adage asserting that the loudest person in the room is usually the weakest as well. If Donald Glover has shown us anything over the past two years, it's that he now, more than ever, is an artist that wields his abilities with a mastery and jurisdiction that suggests that not only is he one of the strongest performers throughout a variety of mediums, but one of the most intelligent and thoughtful as well.