Let's start by acknowledging that the flag and national anthem mean different things for different people. 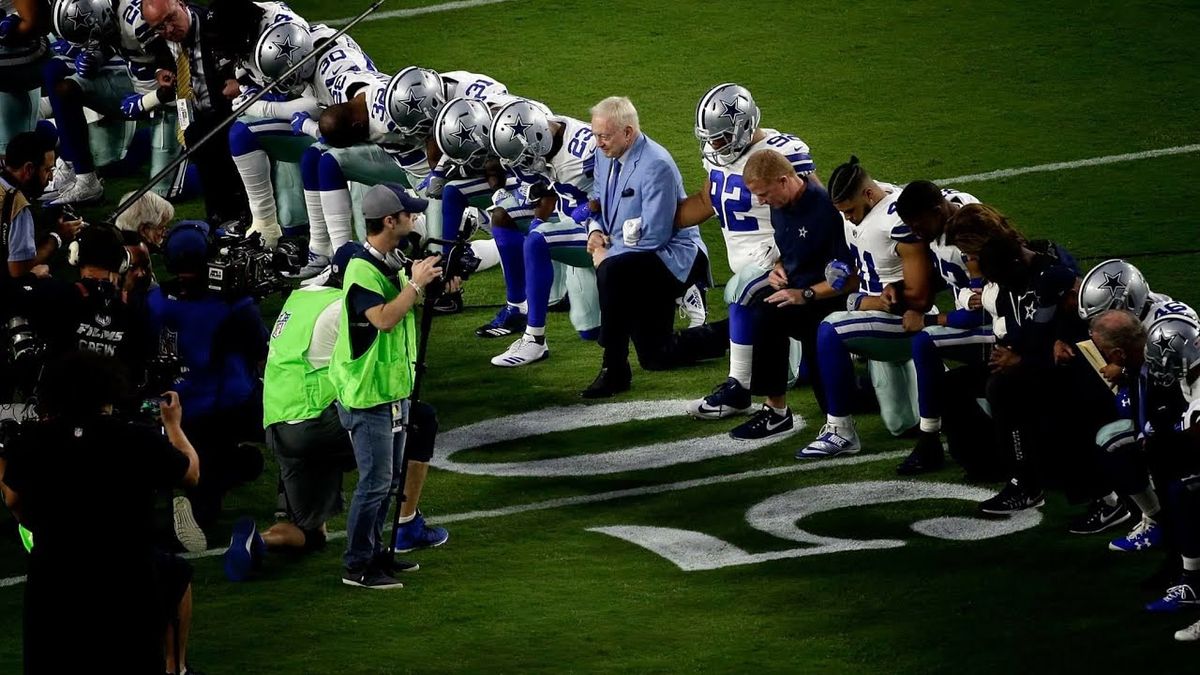 As the 2017 fall football season has recently begun, the National Football League has found itself in the headlines for something other than football. Last year, former San Francisco 49ers quarterback Colin Kaepernick began to take a knee during the national anthem. His reason?

Fast forward to the start of this football season: Kaepernick is jobless and many more players from many more teams have decided to take up his cause by taking a knee during the pre-game ceremony. But like anything else, there has been much opposition to this particular form of demonstration as many patriots find kneeling during the national anthem to be disrespectful. The main argument fueling the dissent?

People against the protest believe that kneeling during the national anthem is disrespectful to the men and women of the armed forces. To them, the flag represents the service members who have sacrificed life and limb so that we can enjoy the freedoms that we wake up every morning and take for granted.

It is important to remember that Kaepernick took his initial "stand" in order to start a dialogue. But when engaging in this conversation, there are a few important things to remember:

1. Let's start by acknowledging that the national anthem may mean different things to different people.

Remember the message: the players have decided to kneel during the anthem to protest the inequality and injustice that they see happening. Do not let this message get lost in translation. Don't let the message become one of 'kneeling players vs. service members'. That's not it. Everyone has a platform- a place they can go where they can reach the most people. As football players, this is their platform. During the anthem is when they make their 'stand'. The knee is not out of disrespect, they kneel at attention. If you can stand at attention and sit at attention, surely you can show respect with one knee on the ground.

The purpose of a protest, by it's very definition, is to draw attention to a problem. Now that they have your attention, will you pay attention to the problem or will you create a new one?

"IN ANY nonviolent campaign there are four basic steps: collection of the facts to determine whether injustices are alive, negotiation, self-purification, and direct action"
-Letter from Birmingham Jail

Though we are all aware that Colin Kaepernick was the first to take a knee, few know the history behind Number 7's decision. Kaepernick didn't always kneel.

He actually used to sit. Former Green Beret and Seahawks player Nate Boyer is the one who gave Colin the idea to kneel instead of sitting.

"We sorta came to a middle ground where he would take a knee alongside his teammates...Soldiers take a knee in front of a fallen brother's grave, you know, to show respect. When we're on a patrol, you know, and we go into a security halt, we take a knee, and we pull security."
-Nate Boyer

After a conversation with a former service member, realizing that there was a more respectful way to get his point across, Kaepernick took the opportunity. This isn't about disrespect. There are many ways the flag can be disrespected. There are many ways men and women of the armed forces can be disrespected. This isn't one of them. If we want to have a conversation about respecting the people that fight for our country, let's start by finding ways to take better care of them when they come back home. But that's a different conversation. This one right now, is about injustice on our own American soil.

If you love something, you want to see it do better. You don't sit back and let it rot. You don't sit back and let it self-mutilate. Men and women of the armed forces fight for freedom, liberty, and justice for all citizens of America because they love America. If all citizens aren't seeing the fruits of their labor, to honor them, we call attention to the forces that are bringing destruction.

Then conquer we must, when our cause it is just,
And this be our motto: 'In God is our trust.'
And the star-spangled banner in triumph shall wave
O'er the land of the free and the home of the brave!
-The Star-Spangled Banner

They fight their fight, now let us do our part to leave this great nation better than we found it. While you and I may never kneel during the anthem, others may and it's our job to let them.