The Three-Toed Sloth Known As Democracy And Why It Sucks

"It has been said that democracy is the worst form of government except all the others that have been tried." - Winston Churchill 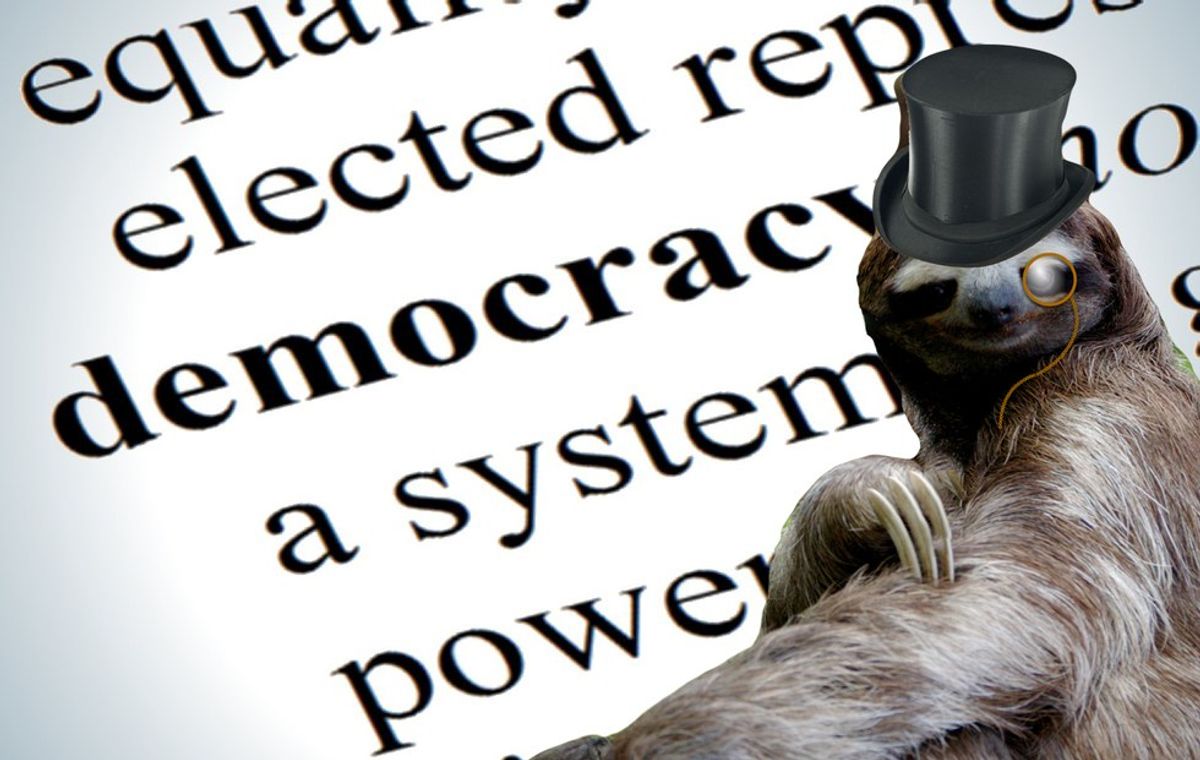 I'm going to start this article off by stating one simple fact: Democracy sucks. Now, don’t get your red-white-and-blue undergarments in a bunch, just hear me out.

As an undergraduate with an international studies major, it was my job to investigate loosely and learn about the different countries in the world and all their attempts at governing themselves. I found out about oligarchies, anarchies, insurgencies, fascism, communism, socialism (yes, those are different) and democracies. I’ve also learned about how these things came about, what was good and bad about them and why, eventually, they failed. Like I said, a slightly more-than-average understanding of a lot of different places. Knowing all this, I will reiterate my earlier statement: Democracy sucks.

Why does democracy suck? Because it's slow. Ever wonder why China became an economic powerhouse? Or how the Soviet Union, a very new government, suddenly was competing toe-to-toe with the United States during the Cold War? Because they didn't rely on the giant three-toed sloth otherwise known as democracy. Without getting into too much detail, both China and the Soviet Union are/were an authoritarian government, where a small group of elites, or one individual (in the Soviet Union’s case), would make all of the decisions. Do you need education reform? Done. Build 30 new missiles? Why not? Need a high-speed rail? Tickets will be sold next week. As many in the U.S. will understand, no single decision in a democracy is ever so simple. Gun regulation is such a hotly debated topic, yet no one is willing to address it. Environmental law is discussed for hours without any results. Social security has been predicted to fail for several decades now, and not a single lawmaker can agree on the path to take.

Why else do democracies suck? Because they're nearly impossible to establish. I cannot even accurately recall how many times a country has tried to establish democracy only to have it crumble and wash away. Democracies, in their infancies, are the weakest forms of governments out there, because everyone must be willing to participate in the system. Think about it this way: If President Obama’s term ended in January, and he decided that he doesn't want to leave, what would we do? Call the military? He controls that. Get Congress to do something? He could disband that. Get the Supreme Court to rule on it? He could have them all arrested. If, at any point, a high-powered official decides to no longer participate in the democratic system, it will collapse. Military coups happen all the time to democracies, replaced with some form of top-down system.

So, what’s the point then? If democracies suck so bad, why should we bother? America cannot get anything done, and we will all be under China’s rule within 30 years. Right? Well, no. The fact that America has had such a long-functioning democratic system is nothing short of a miracle. Then, when you consider that not only have we managed to exist, we've also managed to thrive, becoming a global, economic and political powerhouse–that's like winning the lottery and getting struck by lightning six times. Are democracies slow? Yes, but that slowness allows us the space to talk about decisions and make sure they're the right ones. Democracies tend to avoid making huge, disastrous mistakes because of this. Are they near impossible to establish? Yes, but surpassing that difficulty is a sign that people want to take government into their hands and better themselves.

However, democracies suck. Looking inwardly, we can see that each new voter is less inclined to vote, and rather than shaping our future, many of us decide not to bother. We choose to ignore the system. because we feel that it won't make a difference. Maybe our vote doesn't count, maybe things move too slow or maybe we think the system is corrupt. However, that's the one advantage democracies have over all other systems. If we don't like something, we can change it. And, compared to participating in a revolution where, at any moment, you and your entire family could be murdered for disagreeing with your leaders, it's not that hard. All you have to do is vote.

Coincidentally, a primary is taking place on Tuesday, June 7 in California, and as famous as the presidential election is, don’t forget to vote for your local races. If you want to make a difference, it starts here, when you send members to your local city council, to your State Assembly or House of Representatives. These elections matter the most. Democracies suck, this much is true. However, no other political system will let you get involved. No other political system will listen to your opinion and care about it.