Accepting The Death Of A Sister 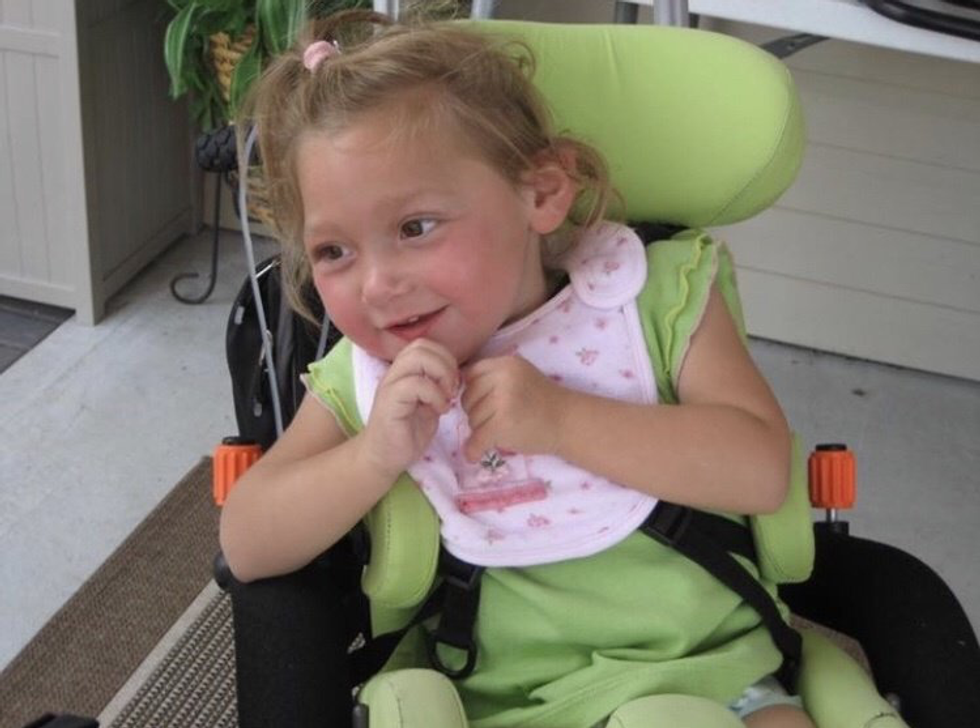 That ever-so-silent, unnerving beep will never leave my head. Tears from those days soon became tattooed to my face. Time after time, the tears became more effusive and I was slowly dwindling. But I wasn't the one who was actually dwindling, it was you. Your little screwed up body, quickly then all at once, broke into pieces. This was the first time, but definitely not the last.

It was the day before Christmas Eve. Your 11-month old body was working up to what we thought was its full potential, even with your feeding tube and oxygen. Mommy and I were the only ones awake. The dreams of Santa coming the next night soon turned into nightmares when your jolly red face turned purple. Your hands we would use to help you unwrap gifts with became empty and lifeless. And the heart that held your life together stopped for a break.

We all knew this day was coming, but we didn't think so soon.

But, how could a girl with only half a brain change the world?

I heard the beeping four more times in my life. After that, the sound didn't seem so abrupt. Now, I hear it every day. I remember each time vividly. The second was strange because we were expecting it. Three years since, your body was breaking down, your breaths becoming further and further apart. There it was again, that beeping noise. We immediately stopped it, shoving air down your throat. It was over, and you were alive once again.

The other times happened many years later, you were nine. You took a turn for the worse and your body came to a halt. You had a severe intestinal blockage and you were rushed into surgery. Your body began to break down even quicker than before - you were septic. The third time was the night after your surgery. You couldn't do it — life was getting too hard. You were on a ventilator for two weeks after that.

The fourth was a couple of days later. We wanted you off the ventilator, but you were not ready. We took the ventilator away from you, and the beeping noise began again. I watched as your chest sank deep and your eyes rolled behind your head. You were the one actually dying, but we looked as if we were the dead ones.

Only Mommy and your doctors were there for the fifth time. Maybe you had a method behind this — did you want to die? Did you want to stop all of this? But, as that treacherous beeping noise began, they stopped it. This time with surgery and another tube. You now had six tubes in your 27-pound body. How is that possible? When is the end to this madness? The sixth tube made me realize something: I was the one who wanted you to live, to fight, and to stay here with me. You never asked for this. You never asked for six tubes or life in the hospital. I was doing these things and pushing you to live when you couldn't.

From the time you were born, I wanted you here with me forever but soon learned this was only a dream.

Know that when you go, I will be hurt, but the pain I feel will be only minuscule compared to the pain you feel every day. I have become content with the inevitable. You will no longer have six tubes in your body or have doctors examining you every day. You will stay at home where you are happy with your family. You will be comfortable and loved every day.

Your breaths are now getting shorter and your skin is getting colder. So, when that final beep comes I won't stop it. I won't put me before you. You will not have to feel pain and you will not have to suffer. You are very tired. You've had enough, but I promise this won't be the end because there is no end. You will always be my sister and I will always love you. Now, we are at the bottom of the page, but it isn't the end of our story. The next page may appear blank and this story may have seemed to end, but look closely and continue reading for this story, not I nor you have an end.