7 Harsh Realities of Dating After College

7 Harsh Realities of Dating After College

Dating after college is MUCH different than dating in college. You have to come to terms with the following seven realities.

While there are many challenges you have to deal with upon graduation, dating ranks high up on the list.

Post-college dating can be very challenging, and this redditor pretty much sums up why: 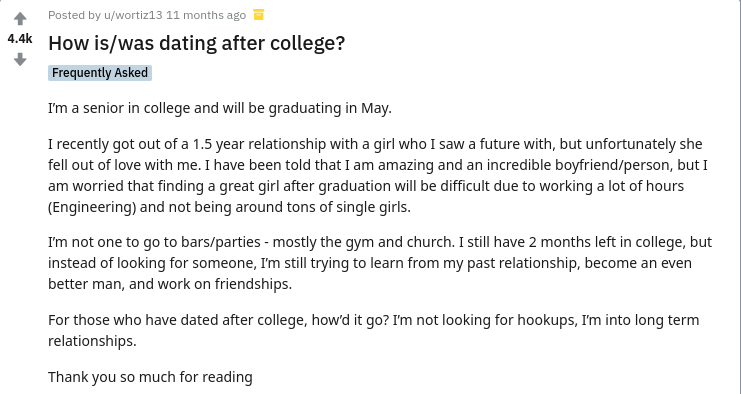 In other words, if you're like most people, all of a sudden you find yourself:

Of course, expectations are high when it comes to college dating:

Research by the Independent Women's Forum shows that a whopping 63 percent of college women expect to meet their spouse in college.

The reality is different, however: Just 15 percent of people meet their spouses in college based on the findings of a study of 14,000 Americans by wedding planning site The Knot.

So how do you prepare for post-college dating? By coming to terms with this harsh realities:

You'll have to set up an online dating profile at a point.

While people's expectations of meeting their special one in college can be a bit overly optimistic, the fact is that college remains one of the major avenues for people to connect and form relationships (no matter how fleeting) -- so much so that at least 72 percent of people would have hooked up at least once before they graduate college.

Once you are out of college, however, your social circle all of a sudden reduces drastically -- and as weird as this may sound, online dating is currently the number one way people meet their future spouse.

Multi-dating is a lot more common than you'll realize.

While it can be difficult to be dating multiple people at the same time in college, and it is likely to be highly frowned upon, dating more than one person at the same time (also known as "multi-dating") is a lot more common post-college.

Money now matters a LOT more than you realize

Of course, this is not to say that you don't have to worry about money while dating in college. You do. But the importance of money suddenly grows in oversized proportions once you graduate college.

In college, you were all students and there isn't a lot of expectations about you having to earn. Once out of college, however, there tends to be a lot more focus about your ability to cope financially should the date lead to more.

You'll appear all the more lonely (and pressured to date).

We are social animals, and are as a result influenced a lot by what our peers do and say. You should be a lot more prepared for the post-college loneliness and pressure to date as you watch your friends start to get engaged one by one.

In college, you didn't have to worry about all that since, you know, you were all students. Post-college, however, you start to age and all your friends start to invite you to their weddings. All of a sudden, you start to feel that time is up against you. Prepare for that and be ready to cope!

It's a bigger task.

Dating was simpler in college. You didn't have to worry a lot since you were surrounded with your peers and people with a lot of similar interests (or at least a few things in common, starting with being in the same college).

However, post-college, you suddenly realize that you're mostly dating a complete stranger and have to take time to know them, their interests, and their background, and what you both have in common.

Okay, "realer" is not a real word… but you get the gist.

While dating in college, there isn't much of an expectation of what comes out of the relationship, and most people somehow know that the relationship won't amount to much.

Post-college, however, there is a lot more intent to dating.

Of course, this does not diminish college dating in any way. Instead, post-college dating tends to be done with a lot more intention and expectation of a partnership or settling down (rather than fearing that things will go south on graduation day).

Age doesn't matter that much anymore.

Most of your dates in college are likely to be peers and people of the same age group.

Post-college, however, it isn't unusual to date people much older or much younger; age differences of five, ten, or more years isn't going to be very uncommon or frowned upon.