Cyberbullying: It's Time We Talk About This Deadly Issue That's Been Swept Under The Rug

Cyberbullying: It's Time We Talk About This Deadly Issue That's Been Swept Under The Rug

"Sticks and stones break only skin, while words are ghosts that haunt me" 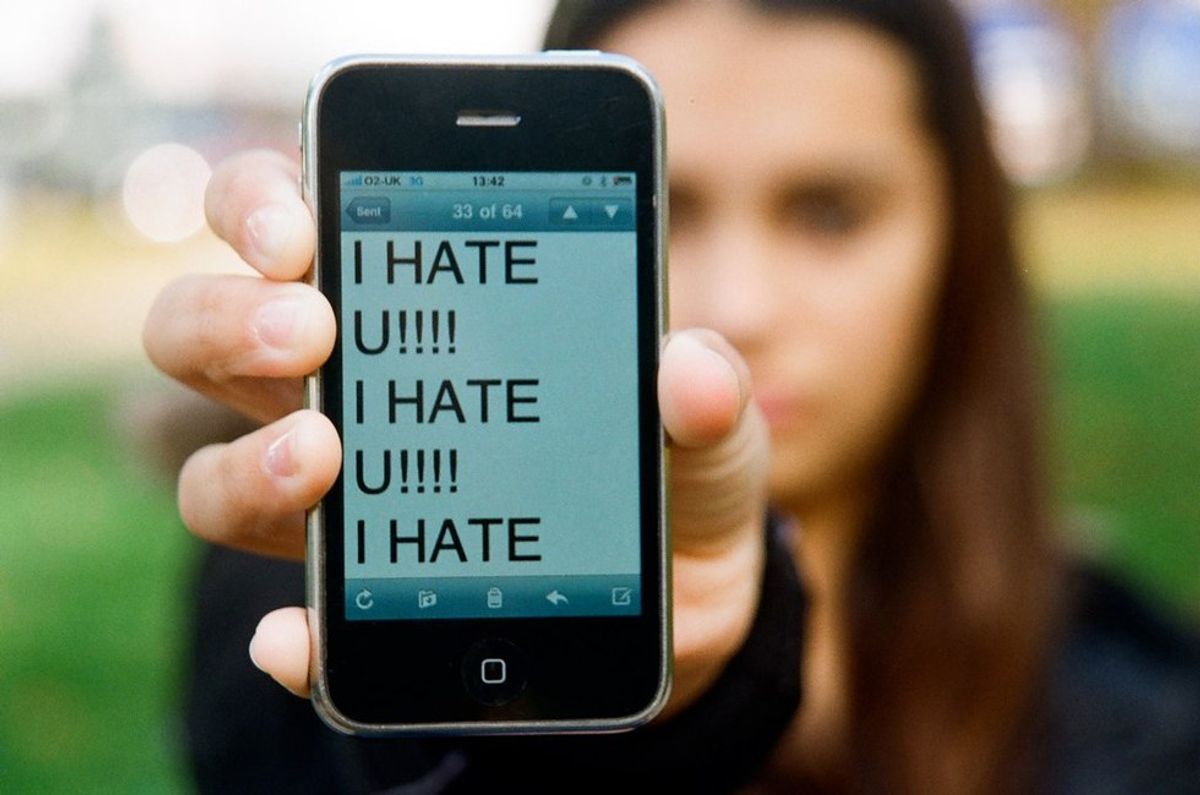 "The use of electronic communication to bully a person, typically by sending messages of intimidating or threatening behavior"; this definition sounds all too familiar in today's society. Still, far too many people don't take cyberbullying seriously enough. Since it's online, you just shut off your computer or phone and it'll go away. Right? It's not happening in person, so it can't be that bad. Right? The person isn't being physically bullied, it's just words. Right?

Wrong. Cyberbullying is a serious form of bullying because the internet allows for hurtful and threatening messages to travel far and fast. Once something is online, it never EVER dissapears, even once it's been deleted. Shutting off your phone or computer won't stop bullies from sending hurtful information about you across social media platforms. You can never escape. That's what makes this form of bullying so scary. You aren't even safe when you're alone in your home. Many adults, including my own mother, have said that today's generation has it much harder than past generations due to the increased forms of media being used to harass and harm individuals. Still, some people just cannot wrap their minds around the fact that words can hurt.

Here are some stories of real young adults who have faced cyberbullying and how much it has impacted them for life:

"When I was in eighth grade, and ask.fm was still a cool thing, I got a bunch of anonymous, hateful messages. They said that I was ugly, that I couldn't dance, and all these other horrible things. Since I grew up dealing with a lot of bullying at school, it really killed me that I was getting bullied in the safety of my own home over the internet. I later found out who the people (there were three of them) were that were bullying me. They turned out to be people I actually knew that I would have to see often. It really sucked but I haven't dealt with any bullying since I began high school and now I'm a senior that's slowly gaining back my self confidence" - Airyanna

"I made this whole status about trump and all [during the election]. Well these girls who are against trump told me to kms, called my mom and brother nasty names, told me I was cancer to society, it was bad. Also, my freshman year, this girl (I didn't do anything to her) she made a rumor but said I started it, she told everyone I was making fun of her little brother who was in the hospital...which I never did but of course everyone believed it" - Gabriella

"I was cyber bullied anomonously. There was a Facebook page about me. Eventually I found out who did it. Many were friends that would hang out with me everyday. Sometimes I pretended I was sick so I could skip a class I knew a bully was in. It haunted me from middle school to high school. Because of it, I write my feelings out in poetry and songs because I couldn't trust anyone. I was varsity soccer player since freshman year and didn't play my senior year because the girls bullied me. I gave up my chance to play in college because of that. I still remember how it felt. Sleepless nights. Crying myself to sleep every other night. Hiding the pain from my parents. Because they couldn't help. Wanting to transfer schools or even hurt myself. I never did though thank God. Those bullies made me into the outgoing, caring, free spirited person I am today though"- Danielle

"I felt powerless [when I was attacked on twitter], but to be honest it was because my friends wouldn't back me up. She [the bully] had so many people take her side and come after me. I wasn't necessarily overwhelmed by it but I can see how some one with less confidence then me would be. I felt like they didn't want to back down, and even after I stopped tweeting, people where coming at me still. I felt uncofortable the next day in school, especially because they made me sit next to her in class. Some how the school found out about it but they didn't do anything."- Megan

Lastly, my own story. The summer I was going into high school, about a week or two before school started, I began receiving some odd Facebook messages. People were questioning me on some nasty things they heard I had been saying about them or their family members. I was confused because I'd never say anything nasty to anyone, especially someone I barely know. More and more people began coming forward asking me why I was saying these horrible things about them. I began to look into the issue. I discovered that someone, to this day we never learned who that someone was, made a fake Facebook profile under my name. The person joined tons of hate groups and starting sending threatening messages to many people whom I liked a lot and never would've said a bad word about. After a few days, I finally told my mom what was going on. She told me to send a Facebook message or text to every single person I know and tell them what's been going on. I did this, and some responses i got back stick with me to this day. One girl, practically a stranger, wrote back and said, "I really don't care so stop sending me messages. It probably is you saying that stuff." I never forgot that, and that is the only memory I have of this girl: her nasty words. Lucky for me, there were kind people as well. One girl wrote back, "yeah I know it wasn't you and I told the others it wasn't either". It gave me hope. Today, that girl is my best friend. But, her personal story of being cyber bullied is listed above. That's how rapid this issue spreads.

Luckily for me, the fake account was shut down after about a week. But for some, the issues go on for months or years. I've witnessed cyberbullying take one too many lives, and I'm done with the issue being taken so lightly. Cyberbullying is a serious crime and should be taken that way. It damages people to the point of being beyond fixing. It ruins the lives of the victims and their loved ones.Today, I'm spreading awareness, and I hope that you will too.

"Sticks and stones may break my bones, but words can also hurt me... cuts and bruises now have healed, it's words that I remember"- unknown

Click the link below to learn more about cyberbullying and how you can help fight it!