The Cubs and Their Victory That Was Mine
Odyssey
CurrentlySwoonLifestyleHealth & WellnessStudent LifeContent InspirationEntertainmentPolitics and ActivismSportsAdulting
About usAdvertiseTermsPrivacyDMCAContact us
® 2023 ODYSSEY
Welcome back
Sign in to comment to your favorite stories, participate in your community and interact with your friends
or
LOG IN WITH FACEBOOK
No account? Create one
Start writing a post
Sports

The Cubs and Their Victory That Was Mine 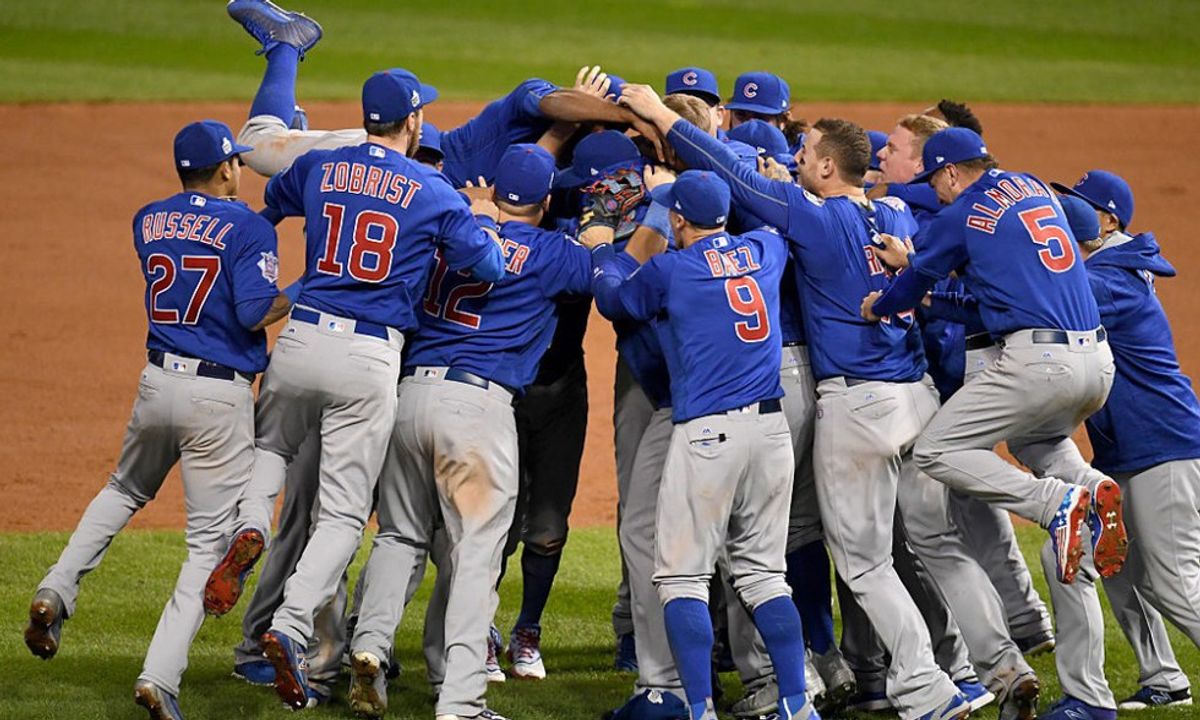 On November 2nd, the Chicago Cubs won the World Series. Something that I have dreamt of ever since I could comprehend what baseball is. I played baseball when I was young. I lived it, loved it, watched it. If it had anything to do with baseball, I was there. Upfront and center. Baseball was my first love. I had dreams of playing professionally and going all the way to the Chicago Cubs. So when the Cubs won the World Series, you can imagine how enthralled I was. It was like I had won the whole thing by myself.

So you could only imagine how I was when the final out was made. I was surrounded by all of my friends. They didn't really care about baseball, but they knew that I did. So when I was excited, they were excited. In a way, it made me feel that I was somewhat there. They made me feel the same way that a crowd does. Excited, anxious, thrilled. I sat on the edge of my seat the entire time. This was the moment I had been waiting for all of my existence. (Sorry future family, you're on hold right now as is my degree. I want you too, but the Cubs are more important right now.) We were ahead most of the game, but when the Indians tied it, I was on pins and needles. I don't even think I was sitting on a chair, I was sitting on the air in front of my chair.

Then, the game went to extra innings. I wasn't even sitting anymore. I was standing up, on my tiptoes at that. Then, we scored. I repeatedly jumped up and down for a good 5-10 minutes. We were ahead. This is real, I thought. We were two runs ahead. Now, the bottom of the 10th inning. My anxiety was at about 100 on a 1-10 scale. I was ready for the win, but also for the disappointment of a loss. So when the Indians did not score a single run at all, when the final out was scored, I jumped up. I had my Cubs blanket wrapped around me. I proceeded to run down the hallway, the blanket being used as a cape. I got weird looks from people I didn't even know. And I didn't care.

I was just so happy that we won. We actually won. It's been 108 years. I waited a small portion of that, but it felt like a lifetime. But it was worth it.